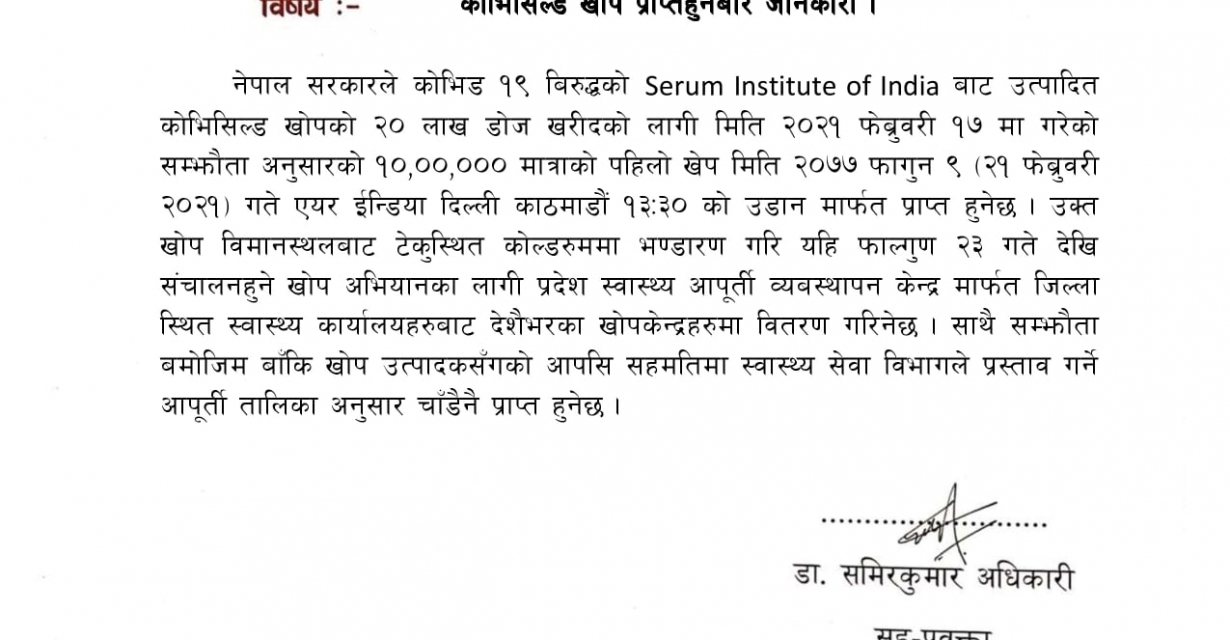 As many as one million (10 lakh) doses of Covishield vaccines have arrived in Kathmandu from India today.

According to the Ministry of Health and Population, an Air India flight from New Delhi carrying the Covishield vaccines produced by the Serum Institute of India landed in Kathmandu today.

The government had signed an agreement with the Serum Institute on February 17 to purchase two million doses of Covishield vaccines. According to the agreement, the first batch of vaccines has been brought on Sunday.

The vaccines will be stored in the cold room at Teku and distributed from the district health offices through the state health supply management center to vaccination centers across the country, according to a statement issued by the Ministry of Health and Population.

The vaccines will be used for the third phase of the nation-wide vaccine drive set to begin from March 7.

According to the Ministry, the remaining vaccines under the agreement will also be brought soon.

Similarly, Health Ministry has decided to inoculate teachers and staffers of schools and colleges, owners and workers of registered pharmacies, lab technicians as well as public vehicle drivers and their helpers with the new batch of vaccines.

Nepal launched its immunisation drive on January 27 beginning with medical workers, and plans to eventually cover 72% of the country’s 30 million people after receiving one million doses of the Covishield vaccine free of charge from India.

Health and Population Minister Hridayesh Tripathi had earlier said that Nepal would soon buy two million doses of the AstraZeneca shot, called Covishield and made by the Serum Institute of India, for $4 each, the same price that Bangladesh is paying.

Nepal is also expecting vaccines under COVAX, an alliance backed by the World Health Organisation which distribute shots to poorer countries.

Two other vaccines – Russia’s Sputnik V and one made by India’s Bharat Biotech – are waiting to be cleared by the government.

Similarly, Nepal Government on February 18 approved the emergency use of a COVID-19 vaccine developed by an affiliate of China’s Sinopharm, paving the way for China to donate 500,000 doses of the vaccine to Nepal.

In recent years, China and India have jockeyed for influence in Nepal and poured millions of dollars into aid and investment in infrastructure.

Seeking to steal a march over rival Asian giant China, which has also promised to deliver shots, Indian Prime Minister Narendra Modi’s government has been giving nearby countries millions of doses of the locally made AstraZeneca PLC vaccines.

Modi is using India’s strength as the world’s biggest maker of vaccines for various diseases to improve regional ties and push back against China’s political and economic dominance.

Nepal recorded an additional 88 new cases of coronavirus infection on Saturday taking the total number of infections to 273,351 in the country.

There are 1,535 active cases of coronavirus infection in the country with 946 active cases in Kathmandu, 22 in Bhaktapur, and 25 in Lalitpur.

No one succumbed to coronavirus in the past 24 hours, as per the Health Ministry.