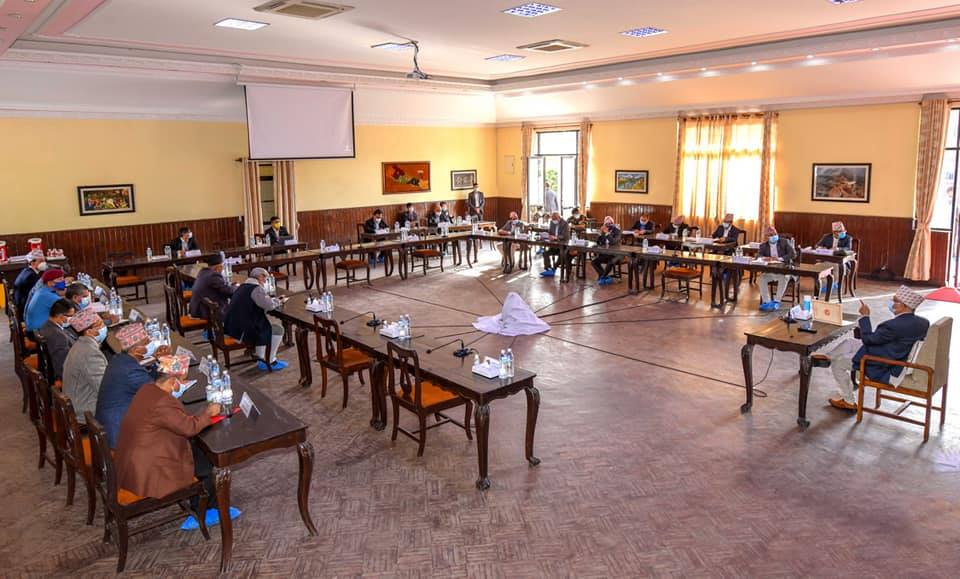 The COVID-19 Crisis Management Center (CCMC) has suggested Prime Minister KP Sharma Oli that restrictions be imposed in the coronavirus hotspot areas across country to break the chain of second wave of infection.

In a briefing with PM Oli held at Baluwatar on Saturday regarding the current situation of COVID-19 in Nepal, CCMC officials did not exactly used the word ‘lockdown’ but said hotspots should adopt the same strategy as of Nepalgunj, Banke.

CCMC officials said that failure to break the chain of the second wave of transmission in big cities will lead to a dire situation.

A minister who attended the meeting said, “No one has used the word lockdown as of yet, but if the infection rate continues to increase in the same way, there might a lockdown.”

According to the Ministry of Health and Population (MoHP), the number of daily infections in Kathmandu, Bhaktapur, Lalitpur, Parsa, Kaski, Dang, Banke and Rupandehi has exceeded 500 as of Saturday.

Stating that the order issued on Monday to close educational institutes was not fully implemented, and that schools and colleges were conducting physical classes under the pretext of giving exams, CCMC officials said educational institutions defying government order be held accountable.

Though border checkpoints cannot be closed, inward flow from borders must be managed, CCMC officials insisted.

The officials said that Nepali nationals should be allowed to enter Nepal via borders after thorough checking while foreign nationals must be stopped from entering the country via land for the time being.

CCMC also proposed that people entering the country via air be mandated to stay in quarantine whereas holding centers should be more organized.

After the briefing, PM Oli instructed CCMC to prepare a proposal and send it to the Council of Ministers for approval.

Meanwhile, a girl staying in hostel of a private school in Rupandehi suddenly died on Saturday. The school was conducting exams, defying the government’s directives.

15-year-old Pratima Sapkota, a Grade X student of Paramount Boarding School in Tilottama Municipality, died on Saturday while being rushed to the hospital for treatment.

The vice-principal of the school, Liladhar Kirant, said that the girl’s guardian was called on Saturday morning after she fell ill and he later received the information that she had died on her way to a hospital.

Bhaskar Bhandari, a relative of the girl, said that the girl was in a serious condition with fever and stomach problems, and died on the way to the nearby Crimson Hospital.

He said that the school, in the name of conducting exams, did not seek medical attention for the child.

“She was in a serious condition when we got the information, her body temperature was very high. When we took her to the hospital, the doctors pronounced her dead on arrival,” Bhandari said.

Doctors at Crimson Hospital said that the girl had died before being brought to the hospital.

The cause of death has yet to be determined and the hospital said her swab had been sent for COVID-19 testing.

As per friends of the deceased girl, she developed fever two days ago but the school did not take her for treatment. She had told her friends about feeling uneasy since Friday night.

The deceased’s parents are abroad for foreign employment. About 50 students attended the examinations.

Some other students are also suffering from common cold and fever. After her death, swabs of other students have also been collected and sent for RT-PCR test.