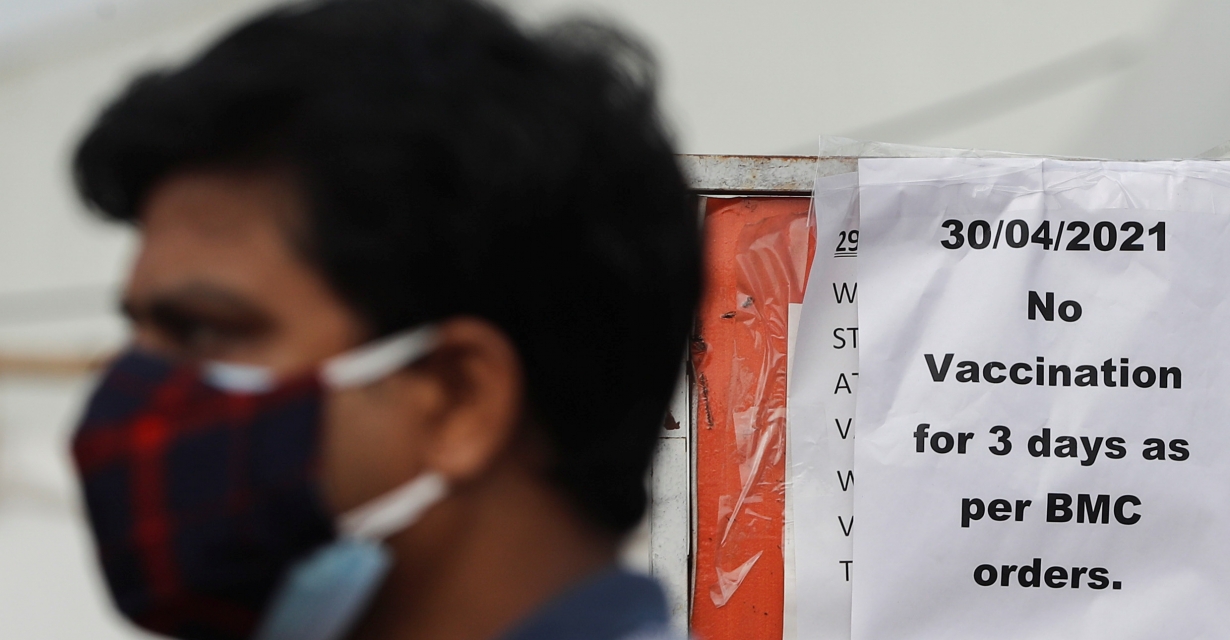 A man walks past a notice that reads “No vaccination for 3 days as per Brihanmumbai Municipal Corporation (BMC) orders” pasted outside a coronavirus disease (COVID-19) vaccination centre in Mumbai, India, April 30, 2021. REUTERS/Francis Mascarenhas
Vaccination centres close in Mumbai as India posts another record rise in COVID-19
Read Time: 4 minutes

All vaccination centres in India’s financial capital of Mumbai were shut for three days starting Friday due to a shortage of vaccines, said authorities, as the country posted another record daily rise in coronavirus cases.

India reported 386,452 news cases on Friday, while deaths from COVID-19 jumped by 3,498 over the last 24 hours, according to health ministry data.

However, medical experts believe actual COVID-19 numbers in the world’s second-most populous nation may be five to 10 times greater than the official tally.

India has added about 7.7 million cases since the end of February, when its second wave picked up steam, according to a Reuters tally. In contrast, it took India nearly six months to add the previous 7.7 million cases.

The country is in deep crisis, with hospitals and morgues overwhelmed, medicines and oxygen in short supply and strict curbs on movement in its biggest cities.

India is the world’s biggest producer of vaccines but does not have enough stockpiles to keep up with the second deadly COVID-19 wave, despite Prime Minister Narendra Modi’s government planning to vaccinate all adults starting May 1. Only about 9% of India’s 1.4 billion people have received a vaccine dose since January.

Several states have said they will be unable to immunize people aged 18-45 immediately.

Modi is scheduled to meet cabinet of ministers on Friday as the wave of infections cripples the nation’s health system and threatens to impact major businesses as absenteeism grows with staff falling sick or taking leave to tend to sick relatives.

World aid has started arriving in India as it struggles to combat what has been described as a humanitarian disaster.

“Just as India came to our aid early in the pandemic, the U.S. is committed to working urgently to provide assistance to India in its time of need,” U.S. Secretary of State Antony Blinken said on Twitter.

“Today we are proud to deliver our first shipment of critical oxygen equipment, therapeutics and raw materials for vaccine production.”

The United States will send more than $100 million in medical aid, including 1,000 oxygen cylinders, 15 million N95 masks and 1 million rapid diagnostic tests. It also has redirected its own order of AstraZeneca supplies to India, to allow it to make more than 20 million doses.

Shipments from other countries continued to pour in, with a third one from the United Kingdom reaching earlier in the day. Romania and Ireland also sent supplies late on Thursday.

India’s severe medical oxygen supply crisis is expected to ease by mid-May, a top industry executive told Reuters, with output rising by 25% and transport infrastructure ready to cope with a surge in demand.

A worker died and at least two were injured after an oxygen cylinder exploded during refilling at Panki Oxygen refilling plant in Kanpur in India’s northern state of Uttar Pradesh earlier on Friday, local police told Reuters.

The incident comes a week after at least 22 patients died at a public hospital in India’s western Maharashtra state when their oxygen supply ran out after a leak in the tank.

Prominent U.S. disease modeller Chris Murray, from the University of Washington, said the sheer magnitude of infections in India in a short period of time suggests an “escape variant” may be overpowering any prior immunity from natural infections in those populations.

“That makes it most likely that it’s B.1.617,” he said. But Murray cautioned that gene sequencing data on the coronavirus in India is sparse, and that many cases are also being driven by the UK and South African variants.