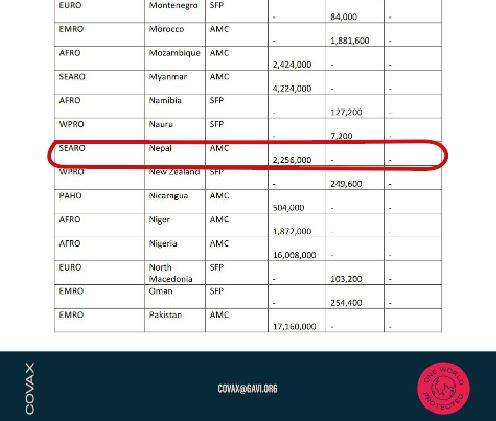 Nepal is all set to receive 2,256,000 doses of AstraZeneca/Oxford and Serum Institute of India’s vaccines under the Coalition for Epidemic Preparedness Innovations (CEPI), Gavi, the Vaccine Alliance and the World Health Organisation, as co-leads of the COVAX initiative for equitable global access to COVID-19 vaccines.

“For AZ/SII [AstraZeneca/Serum Institute of India] and AZ [AstraZeneca] indicative distribution, delivery is estimated to begin as of late February,” reads the forecast. Meanwhile, the Department of Drug Administration in Nepal has granted emergency use approval only to the Oxford-AstraZeneca vaccine as of yet.

The purpose of the interim distribution with countries is to provide governments and health systems with the information they need to plan for their national vaccination programmes, according to COVAX.

The total doses cover, on average, 3.3%of the total population of the 145 participants, including Nepal, receiving doses from at least one vaccine manufacturer.

“This is in line with the Facility target to reach at least 3% population coverage in all countries in the first half of the year, enough to protect the most vulnerable groups such as health care workers,” reads COVAX’s statement.

A total of 271,431 COVID-19 infections and 2,031 deaths due to complications of the virus have been reported in Nepal as of Wednesday.

According to the Ministry of Health and Population, as many as 145,844 people have been inoculated with Covishield vaccines as of Wednesday through 201 vaccine centers set up in 77 districts across the country.

India had donated a total of 1 million doses of Covishield vaccines to Nepal as grant assistance on January 22. In the first phase of the vaccination drive, Nepal government is inoculating health workers, security personnel, sanitation and other frontline workers.