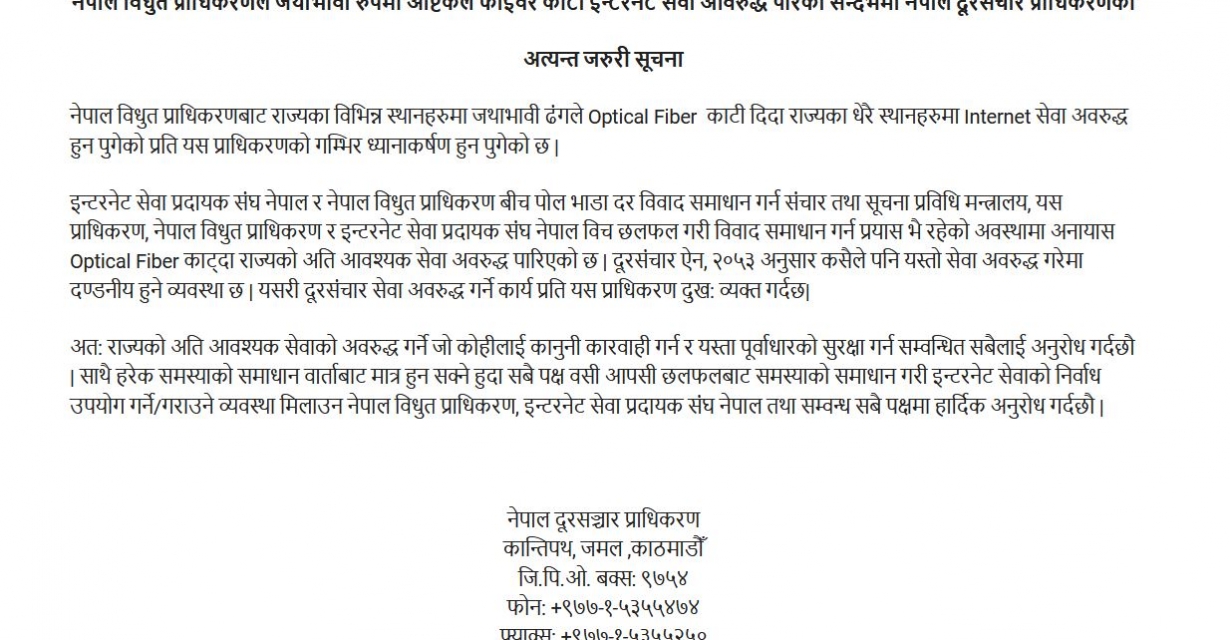 The tussle between Nepal Electricity Authority (NEA) and Internet Service Providers (ISPs) has affected internet users after the state-owned power utility started removing internet transmission cables from the electricity poles throughout the country from Saturday.

NEA and ISPs have been locking horns after the Authority announced to hike the rental charges of utility poles. Through a new regulation, NEA had proposed to double the charges on fiber cables stretched along the 66kv transmission lines, making it Rs. 32,000 a year without taxes. For fiber optics on 33kv transmission lines, charges will reach Rs. 30,000.

Likewise, increment in the rental charge for the utility poles to Rs. 200 per annum from Rs. 50 in the rural areas and Rs. 300 from Rs. 200 in city areas was proposed in the regulation.

NEA had published a notice demanding the private sector to pay the rental charges of the utility poles by October 1, Friday, and warned that should the companies fail to comply, the wires would be removed from the poles.

NEA has said that it wants ISPs to share the infrastructure so that customers would benefit from the reduced cost. ISPs, however, have been complaining that the internet cost would go up if the increased rental charges were applied.

Internet Service Provider Associations of Nepal (ISPAN) and CAN Federation had submitted recommendations to the government urging the latter to help the private sector to keep the internet cost at the lowest possible.

According to NEA officials, the authority has removed a number of internet and cable TV wires and cables from its poles in Biratnagar, Janakpur, Pokhara, Butwal, Surkhet and Dhangadhi, among others. Reportedly, action was taken only against those ISPs that defied Friday’s deadline and did not come into contact with NEA offices.

Moreover, ISPs have warned of possible legal action against NEA for removing the cables and causing interruption of internet service, which is listed as an essential service.

Following the rift between the two service providers, Energy Minister Pampha Bhusal a few days ago also expressed her commitment to resolve the matter but no progress has been seen in this regard so far.

The Telecommunication Authority has also requested to resolve the issue through mutual discussion of all parties.

By the end of the last fiscal year 2020/21, 44 ISPs were in operation and the number of their customers reached 1.63 million. Worldlink Communication, Nepal Doorsanchar Company, Subisu Cablenet, Classic Tech and Vianet Communication are the major ISPs in Nepal with more than 100,000 customers.