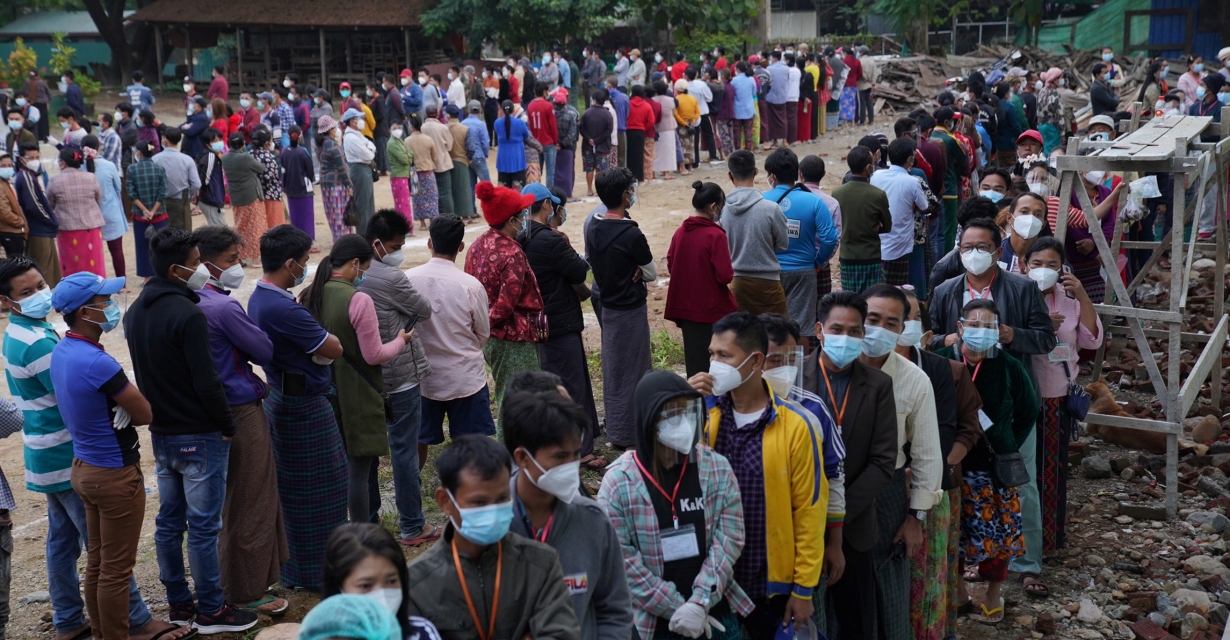 People wait in line before voting during the general election at a polling station in Kachin State, Myanmar, November 8, 2020. REUTERS/Stringer
Myanmar’s Suu Kyi favored to win as election gets underway
Read Time: 4 minutes

YANGON, Nov 8 (Reuters) – Myanmar voted on Sunday in an election seen as a referendum on a fledgling democratic government whose reputation collapsed overseas amid allegations of genocide but which remains popular at home.

Leader Aung San Suu Kyi’s National League for Democracy (NLD) is expected to win a second term in the second general election since the end of decades of military-backed rule.

She is supported by a population that largely sees her as a heroine of democracy, though her win will likely be by a lesser margin than the landslide victory that propelled her to power in 2015.

More than 37 million people are registered to vote, but fears over the rapid spread of COVID-19 in recent months may dampen turnout.

In the biggest city, Yangon, queues formed at polling stations even before balloting started, with voters in masks, face shields and with hair coverings waiting patiently in evenly spaced lines as the sun came up.

Sai Kyaw Latt Phyo, 31, said it was the first time he had left his home in three months. Myanmar is seeing on average nearly 1,100 new daily coronavirus cases, compared to a handful each day in early August.

“I think it is worth the risk,” he told Reuters. “We must take the risk in such a crucial situation for our country.”

Chaw Ei Twin, 38, said she was doing her civic duty.

“I gave my vote to a party which can transform the country. I voted the same party last time,” she said, without disclosing which party.

Suu Kyi’s defenders say critics are unrealistic to expect rapid change in the country after half a century of military rule and are hampering efforts to secure gradual progress.

United Nations Secretary General Antonio Guterres said on Friday he hoped for “peaceful, orderly and credible elections” that could enable hundreds of thousands of ethnic Rohingya in camps in neighboring Bangladesh to return “in safety and dignity”.

More than 730,000 Rohingya, members of a persecuted Muslim minority, fled the country following a 2017 military crackdown that the UN has said was executed with genocidal intent. Myanmar says it was carrying out legitimate operations against militants who attacked police posts.

Hundreds of thousands of Rohingya are confined to camps and villages inside Myanmar’s Rakhine state, mostly denied citizenship and unable to vote, alongside more than a million other people in areas where polls have been canceled due to insurgencies.

Suu Kyi, the 75-year-old Nobel Laureate still known to many as “Mother Suu”, remains overwhelmingly popular in Myanmar, where a recent survey by local watchdog found 79% of people considered her the country’s most trusted figure.

But enthusiasm is weaker in remote regions dominated by ethnic minorities, many of who feel sidelined by the Buddhist Bamar-majority central government.

Doi Bu, vice-chair of the Kachin State People’s Party, one of several new ethnic parties that have resulted from mergers, said the government had failed to bring change to the region in part because it was cowed by the army.

“Although five years is not long, the NLD didn’t do anything necessary, starting with (amending) the constitution,” she said.

The army retains significant powers under the constitution, including holding a quarter of seats in parliament and a veto on changes to the charter.

Tensions between the government and the military have been running high, with Senior General Min Aung Hlaing saying in a rare interview last week the administration had made “unacceptable mistakes” in the lead-up to the polls.

He said opposition parties had complained about irregularities, including voter lists that were incomplete and riddled with errors. The president’s office said his remarks risked creating fear and unrest days before the vote.

The election commission has said it was doing its best to ensure the polls were free and fair.

Smaller parties also say coronavirus restrictions have made it harder for them to spread their message.

Myint Myint Aye, a Yangon street vendor, said she knew little about the more than 90 political parties running, including new ones.

“Our choices are limited due to COVID-19,” she said.