The residents of Limi, Namkha Rural Municipality-6 in northern belt of Humla district are worried about food shortage during winter season as the Nepal-China border transit is closed this year.

Limi is a trans-Himalayan settlement and one has to cross high mountain passes to reach there, which is quite difficult during the winter season.

The food grain grown by Limi locals is enough only for six months each year and so they have no option but to import food items from across the border from Taklakot, a town in the Tibet Autonomous Region of China. This year, however, food shortage looms large for Limi residents due to the closure of the transit point.

Girmet Tamang, a resident of Limi, bemoaned that they had not made any income from trade this year as the border transit was closed. The sole earning of Limi locals is dependent on trade in Taklakot.

According to Tamang, the people of Limi have been managing food grains from Taklakot for years. However, this year they are hoping to get rice grains that is said to be distributed by the Food Management and Trading Company Limited, Simikot (FMTCL).

As snowfall usually begins in Limi from Mid-November, the locals have started to collect and store food grains as well as supplies needed for the winter, said another local Pema Chhoki Tamang.

According to Pema, food shortage had hit Limi since October as the border checkpoint remained closed.

“Incessant snowfall occurs here for three months during the winter, blocking the trails through the mountain passes. If enough food grain is not supplied to Limi to last for the next three or four months, we will be facing acute food shortage,” Pema said.

Meanwhile, FMTCL, Simikot Chief Ram Bahadur Bishta, said 2,000 quintals of food grain had been approved for supply to Limi out of which only 300 quintals was supplied while remaining food grain was in process of transportation.

A meeting of the District Food Management Committee has asked for supply of 73,000 quintals rice grains for the entire district but only 25,800 quintals has been approved for now.

Similarly, only 10,000 quintals rice grain has been approved for the district headquarters of Simikot out of the 17,000 quintals demanded. 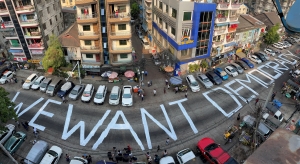