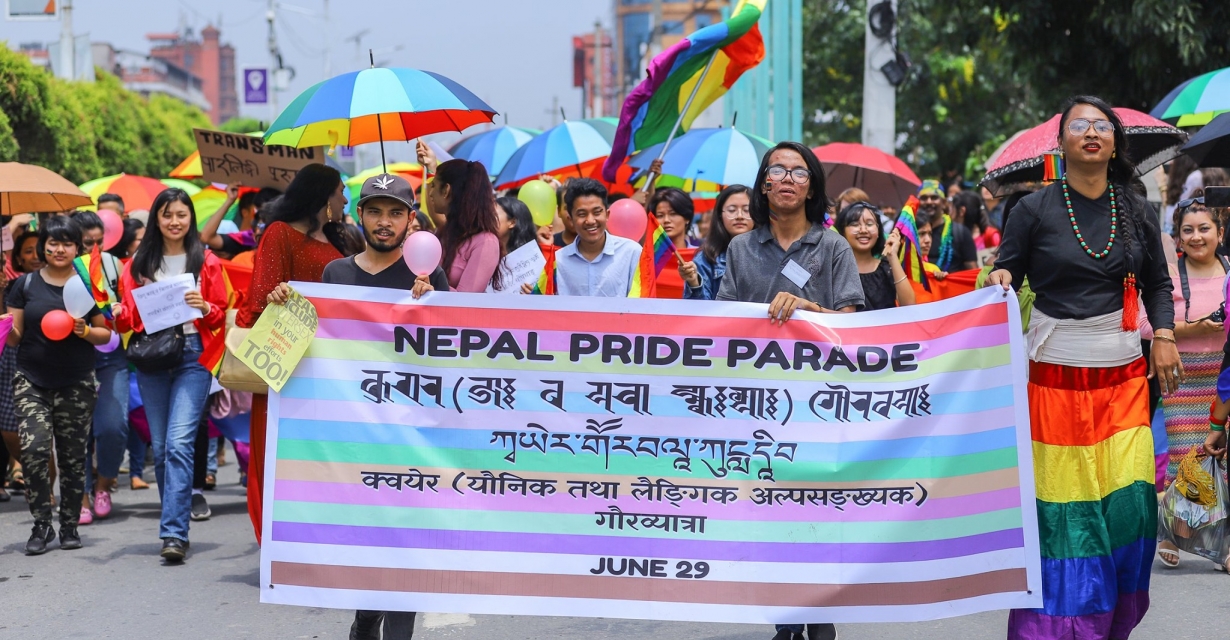 Keeping in mind the national lockdown imposed due to the pandemic, the parade was held online with a marathon of events. According to the schedule, people from the LGBTQI community posted videos expressing what Pride is for them before 11:00 am, from 11:00 am to 1:00 pm Tweetathon and Instathon were held on Zoom.

Similarly, a webinar on Mental Health and Us was held between 1:30 pm and 2:24 pm, another webinar on Intersectionality in the Queer Movement between 3:00 pm and 4:30 pm and a networking event titled Come Talk with QYG & QRC Folks from 5:00 pm to 7:00 pm was held on Zoom.

The day-long events aimed at amplifying LGBTQI voices as well as educating those willing to learn more about the community.

Issuing a public release, Nepal Pride Parade said, “Pride Parade in Nepal is organized by Queer Youth Group, Queer Rights Collective and Campaign For Change. Queer Youth Group (QYG) is an informal network in 2018 voicing for rights of queer people. We primarily work on advocacy and policy changes, research and knowledge generation, publications and resource creation as well as movement building. We are in process to become a not-for-profit. Queer Rights Collective (QRC) is an informal affiliation of queer people in Nepal, works as a support group. Campaign For Change is the first and the only intersex-led organization that works for rights of intersex people.”

It added, “Pride Parades are observed across the globe to celebrate the diversity of gender and sexuality in the social bubbles where gender and sexuality is seen as binary and opposite. While Nepal had many observations and celebrations regarding queer people, in 2019 it was the first time that a separate pride day was observed on 29 June marking 50th anniversary of the Stonewall riot.”

In the newly drafted constitution of 2015, more LGBT favourable laws were included which helped Nepal set an international image as a queer-friendly nation.

Many foreigners can be seen getting married and settling in Nepal because of the nation’s queer-friendly nature.

However, the situation is quite different for the national LGBTQI community as they are still denied equal rights to marriage, property, and education while being constantly subjected to harassment, degradation, and sometimes even murder.

Although Nepal is known to be tolerant towards the LGBTQI community as compared to other countries in South Asia, the nation’s Civil Code still acknowledges a marriage as legal only when it is between and man and a woman.

Surubhi Matata (name changed on request), who identifies as a lesbian, says she is still faces stigmatization even among her educated friends and family when it comes to treating the LGBTQI community with respect, but Pride Parade is liberating because there she can be herself.

Kiran Thapa, a transwoman based in Hetauda, said Pride Parade helps her openly express how she feels as a transwoman and is an opportunity for other LGBTQI folks to connect with each other.

She said, “Transgender men and women continue to face stigma and prejudice in our society, which denies us access to traditional means of employment. With few options, the trans community is often forced to turn to sex work, which can be dangerous.”

She was also of the view that government policies and laws need to be amended and made more queer-friendly to ensure them a dignified life.