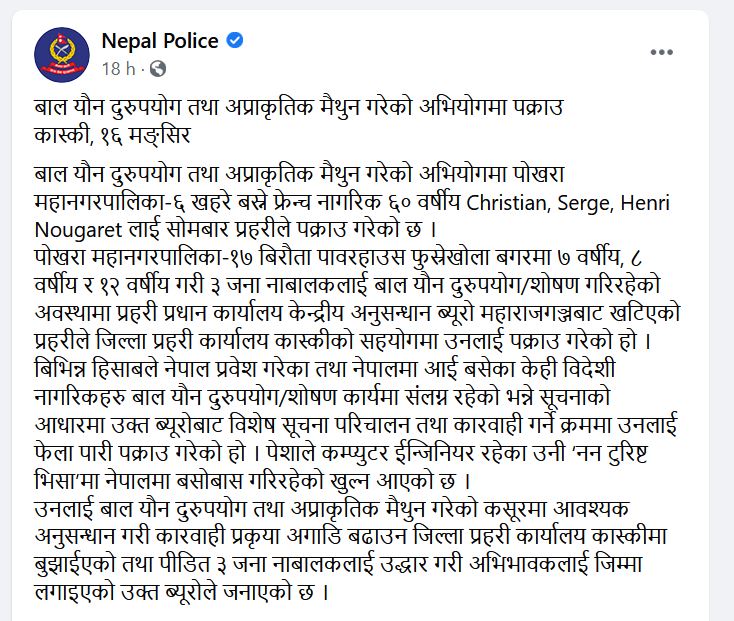 With the help of Pokhara Police, the 60-year-old was arrested red-handed molesting the minors aged seven, eight and 12 from the banks of Purkhekhola in Pokhara Metropolitan City on Tuesday.

Henri Nougaret, a computer engineer by profession, had married a Nepali woman and was living in the country with a non-tourist visa. He has been frequently visiting Nepal for the past 16 years, police said.

Acting on a tip-off that a foreigner was luring young boys around isolated areas and molesting them, CIB had intensified its search for Henri Nougaret.

The French national would lure the minor boys from underprivileged families in exchange for sweets, money and gadgets, and sexually molest them, police said.

The boys have been handed over to their families after counselling whereas Henri Nougaret was handed over to Kaski District Police and is kept in 10 days of judicial custody for further investigation.

He has been charged him with child sex abuse and sodomy.

And in 2010, French charity worker Jean-Jacques Haye was convicted of raping 10 children at a Kathmandu orphanage.

According to Nepal Police, seven individuals—one Nepali, three French, one Dutch, one American national and one Indian were arrested on charges of paedophilia in 2018. At least 25 kids were rescued that year and given psycho-social counseling.

In 2017, as many as 12 foreign nationals and two Nepalis had been arrested on charges of paedophilia.

Absence of stringent laws, illiteracy, poverty, and a penchant for foreign tourists are some of the main reasons that has turned Nepal into a haven for foreign paedophiles.

The Criminal Code Act of Nepal provisions life imprisonment for those convicted of sodomising children below eight years old. A similar act provisions jail term of 18 to 20 years if the child victim is between 10 and 14 years old.

The criminal code mandates a three-year jail term and Rs30,000 in fines for anyone guilty of the above.

Article 66 (3) of Nepal’s Act Relating to Children 2018 also addresses the many forms of child sexual abuse, including the showing of obscene material; creating any such material using a child; any kind of touching, holding or kissing with sexual intent; using a child to stimulate sexual excitement or sexual gratification; or using a child in sexual exploitation or for sexual services.