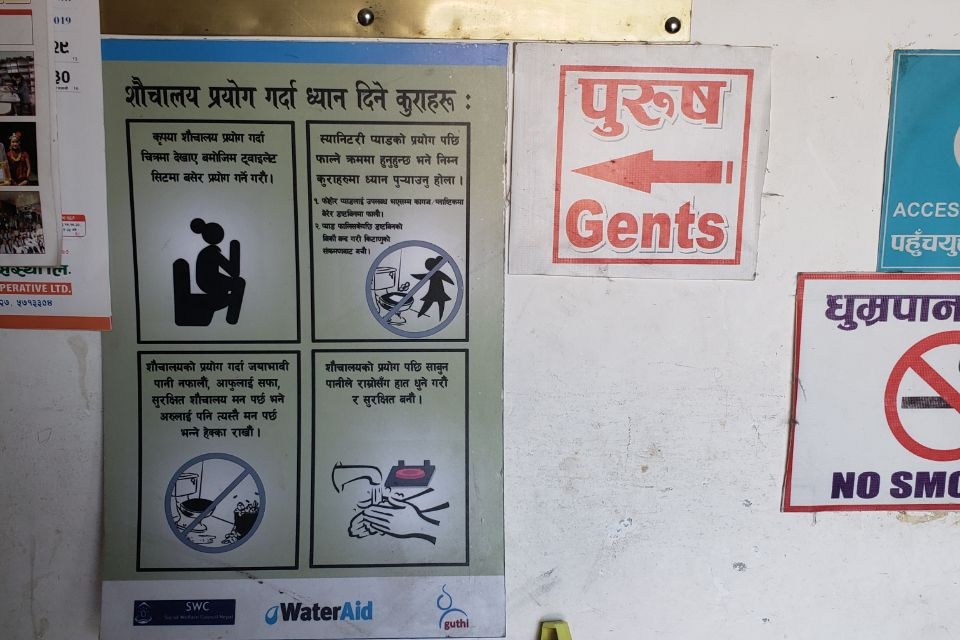 Sixty-eight-year old Maya Devi Tamata uses a wheelchair to aid her physical disability. Though the wheelchair takes her wherever she wants to go, she can’t find an accessible toilet wherever she is out of her home. “Yes there are a couple of disability-friendly toilets in Kathmandu, but they are neither gender segregated nor accessible. Those toilets also don’t have proper ramps or low-height washbasins, which makes me really uncomfortable,” she said.

According to a survey conducted by National Federation of the Disabled-Nepal (NFDN), there are over 3,000,000 people with disabilities in Nepal, out of which 80 per cent are illiterate and 95 per cent are unemployed. As reported in Post Disaster Need Assessment Report (PDNA) 2015, about two percent (or 513,321) of the total Nepali population is reported to have some kind of disability.

Physical disability constitutes 36.3 percent; followed by blindness/low vision (18.5 percent), deaf/hard to hearing (15.4 percent), speech problem (11.5 percent), multiple disabilities (7.5 percent), mental disability (6 percent), intellectual disability (2.9 percent) and deaf-blind (1.8 percent). Within the 14 most affected communities, it can be deduced that 322,110.78 have physical disability, 163,043 of which are women and girls, as per a report published by National Federation of the Disabled-Nepal.

Meanwhile, there are only three accessible public toilets in Kathmandu. One in Bhrikutimandap, another in Koteshwor and the third one is located in Ratnapark. It is important to note that the open defecation-free campaign launched by the government in various parts of the country has yet to construct disabled-friendly toilets.

The public toilet at the gate of Brikutimandap Exhibition Center has one accessible toilet. The toilet was built with the coordination of Association of NGOs in Nepal (AIN). Bimal Poudel, program coordinator at NFDN, informed that the accessible toilet in Bhrikutimandap is the only disability-friendly toilet that meets the accessibility guidelines, while the other two are just models and not accessible in its entirety.

The public toilet at the gate of Bhrikutimandap Exhibition Center is run by husband-wife duo Tirtha Bahadur and Aasha Kumari Rai. The duo has managed to keep the accessible toilet clean, maintained and hygienic. “Nepali people often hesitate to pay to use public toilets, so we don’t earn much. We use boring water for the toilets, so the water is comparatively murky. We don’t even have a water filtration plant for want of budget. The Social Welfare Council needs to close the nearby free toilet as per our earlier agreement so as to encourage people to use this toilet,” said Tirtha Bahadur. 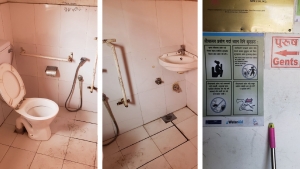 The only accessible public toilet in Bhrikutimandap, Kathmandu.

“We’ve been aggressively advocating about the need for accessible public toilets for years now, but the government does not seem much concerned. Simply installing ramps in toilets does not make them accessible. A proper accessible toilet must be equipped with wheelchair height basins, side handrails, hand dryer, paper holder, menstrual towel-changing tables, ramps and doors wide enough for the wheelchairs, brail signs, handrail, alarms and tilted mirrors, among other amenities. However, the government simply installs a handrail and calls them accessible toilets. The government is not committed to the accessibility standards set by itself,” said Poudel.

The standard guideline design of accessible toilet issued by the Ministry of Health.

Similarly, one of the public toilets at Ratnapark has one accessible public toilet, but its door has been shut for six months now. Tek Bahadur Khatri, operator of the public toilets at Ratnapark, said, “We don’t have enough water to keep all the toilets clean. We have to buy water from the tankers everyday and it is quite unsustainable in the long run. Moreover, we have locked the disability-friendly toilet because its users are rare and we don’t want the toilet to become rundown.” Khatri is unsure when they’ll be able to reopen the disability-friendly toilet.

The disability-friendly toilet in Ratnapark is the sole such toilet built with the coordination of Nepal government in the Valley. 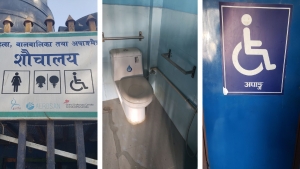 The only accessible public toilet in Ratnapark of Kathmandu.

Vice-chairman at Urban Planning Commission, Saroj Basnet, acknowledged the lack of accessible public toilets in Kathmandu and informed of the Commission’s plan to build new disability-friendly toilets. “We are arranging the funds to build accessible toilets across Kathmandu. The Non Resident Nepali Association has agreed to build five such toilets inside Kathmandu Valley with their investment. So, we hope to have accessible toilets soon.”

Stating that the dearth of accessible toilets is not a result of lack of budget, Basnet informed that members of the civil society are rarely cooperative when approached with the idea to build a public toilet around residential areas.

“Earlier, there were no local or people’s representatives to raise the need for accessible toilets. There was no pressure from the media or the civil society for the same. But now, things have changed. However, whenever we try to build public toilets people do not give us the space around their residencies. Though organizations, media and individuals see the need for accessible toilets, they don’t see that the problem lies in our society. Planning from the government alone is not enough to build accessible public toilets; members of the society also need to be accommodating.”

He also informed that his office has presented a proposal to Kathmandu Mayor Bidya Sundar Shakya to renovate four public toilets in the Valley to make them accessible. “Everyone says they need accessible public toilets, but the same people oppose the plan if the toilets are to be built in their neighborhood. Our main issue for now is the lack of space for public toilets,” he added.

“Not only for persons with physical disability, but we also want to build accessible toilets for third gender and queer people. The main thing we need right now is space for the toilets,” claimed Basnet.

The need for accessible public toilets is glaring, but the number of such toilets is still negligible. Accessible toilets with WASH facility are more common among developmental agencies working on WASH. Government’s mandate, guidelines and skills are rarely transferred to the implementing authorities and hence the so called accessible toilets are not really accessible in practice. Additional dedicated efforts need to be made to raise awareness, build capacity and skills while also implementing accessibility guidelines. Every citizen of the country has the right to live a dignified life and accessible toilets can guarantee the same to the differently-abled.