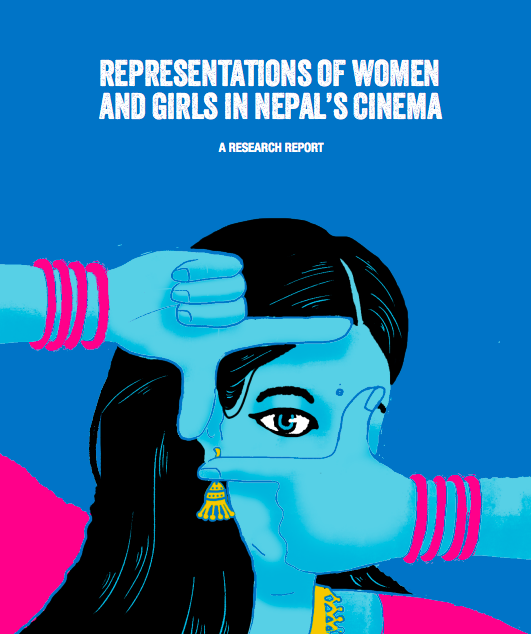 Today media is pervasive and readily available in all its forms. News is read, seen and listened to by most. TV shows and series, documentaries and movies are watched for entertainment by hundreds and thousands in Nepal. As a result of its propensity to influence, it is absolutely imperative on how one is portrayed.

“When we looked into movies claiming to be for women empowerment, and whether they were really female-oriented, we found some harmful patriarchal beliefs in them”, said Shreejana Bajracharya, Campaign Specialist at Plan International Nepal.

Women are shown stigmatized and stereotyped on screen, and this was explored in depth by a research conducted by Plan International and Docskool. “Representation of Women and Girls in Nepal’s Cinema” is a research report carried out under the Girls Get Equal campaign, a global social change campaign, with their three themes being; equal power, equal freedom and equal representation.

“Female actors are thriving in the movie industry nowadays and we are given more importance than before as well”, said Malina Joshi, Miss Nepal 2011 and an actor. But the same cannot be said when portraying their characters. Out of seventeen directors of the forty-seven films studied in the research, only one was a female director. “Most of the movie makers in Nepal are male and because of it, women tend to get objectified for their male viewers”, said Bajracharya. “Even when it comes to music, it is assumed that most of their audiences are men so in order to pleasure them, women are sexually objectified.” 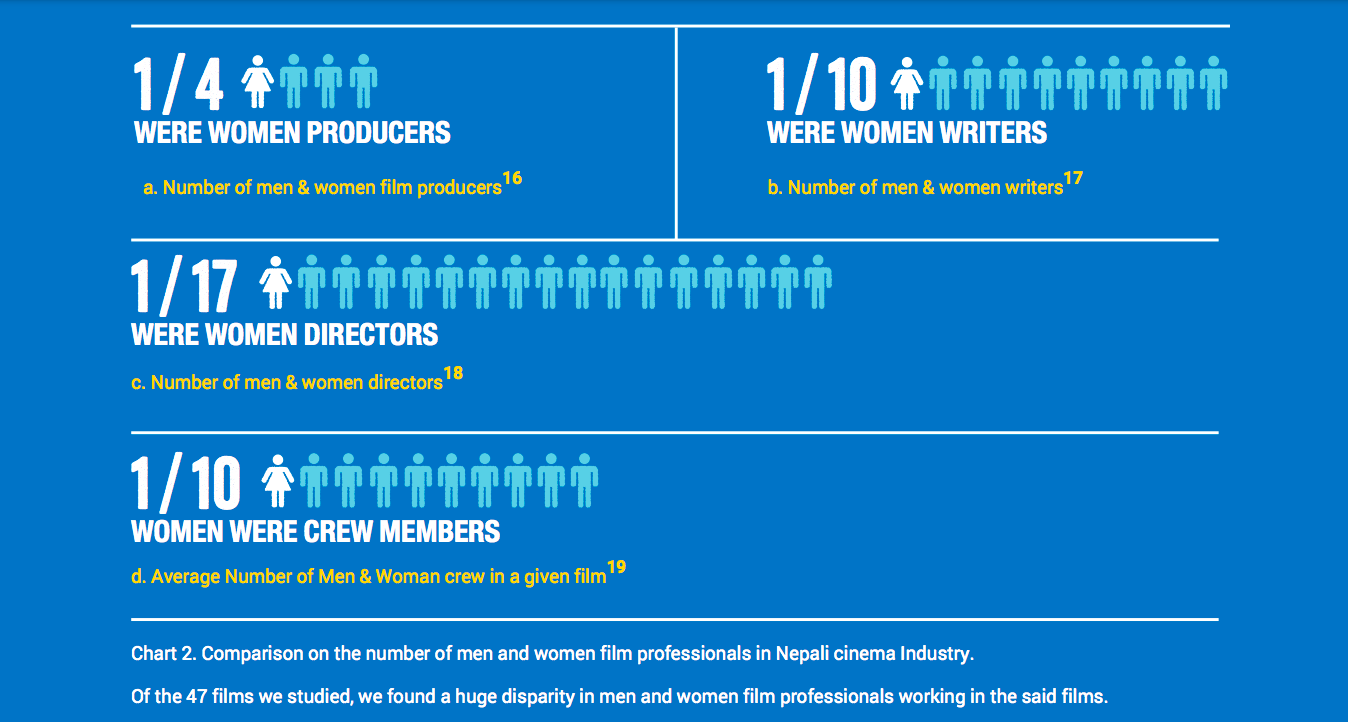 The portrayal of stigmatized patriarchal society and misogyny is rampant throughout the media. This discourages young minds from pursuing their goals that may deviate from what is shown in the mainstream media. Nepali society today has progressed and developed, but that change cannot be seen in films. “A Muslim female shared that they are stereotyped to be very restricted, but that is not the case now. The girls from the Muslim community go to school, are forward and not sinking under religious beliefs, but that remains invisible,” mentioned Bajracharya.

Following the launch of their research, a conclusion Plan International Nepal reached was that young female leaders and filmmakers need to be supported more to break this male-dominant chain. They teamed up with Kipalaya Production in order to support and train ten young aspiring female filmmakers to make films with a gender lens. Recently on “Human Rights Film Festival”, two of their films got appreciation along with an award as well.

In this day and age, women are not the only ones being misrepresented to the public. People from the LGBTQ+ community have been affected as well. “They were taken into roles of desperate and comedic characters before, but now there are more positive roles and positive outlook towards LGBTIQ people in TV shows”, said Angel Lama, advocacy officer of Blue Diamond Society Nepal, Miss Pink Nepal 2018 and the first ever transgender participant of Miss Universe Nepal 2020.

Despite the progress the industry has made in terms of acceptance and knowledge, it is not enough. “In most of the talk shows, only one person from the LGBTIQ community is called upon to talk about the issues faced. But this is a very diverse topic where not only one person can represent the entire community properly,” said Lama. “Media generalizes LGBTIQ.” The several different members of the community are generalized as either trans women or gay people, but there are more. There are non-binary people, gender non-confirming people, lesbians, etc. “Proper representation of this community in the media would be much more meaningful,” she adds.

For years, slurs like “chakka” and “hijada” have been used in a poor and rude context towards LGBTQ+ people. Recently a political leader used a slur that is very harmful to the community and “to see a person with influence using such demeaning words openly make the work done by BDS since 2001 seem meaningless”, she states.

Due to the use of such degrading words, LGBTQ+ people are emotionally affected and discouraged, as they are spoken in schools, houses and in the media. “Mental health is also mostly affected by such events. During the lockdown, more than 25 people committed suicide from our community”, says Lama.

Raising voices against these stigmatized characters and misogyny in a patriarchal environment may be difficult, but it is extremely necessary. “We were not given the time to have a conversation and when we did, they were hesitant to speak about subjects related to misogyny”, said Shreejana Bajracharya.

The Nepali media has gone through a lot of developments regarding the depiction of harmful and patriarchal ideologies. But changes are required behind the scenes as well. “What a lot of the well known directors said was that they select the female leads in accordance to and suited for the selected male characters”, Bajracharya shared horrified. However, “it is nowhere near done, but changes are being made,” mentioned Malina Joshi. Most of her colleagues who work as makeup artists, choreographers and designers are from the LGBTQ+ community.

“The glamour industry is very accepting and appreciative of people from the LGBTQ community and it is high time the Nepali society became so as well”, says Malina Joshi.