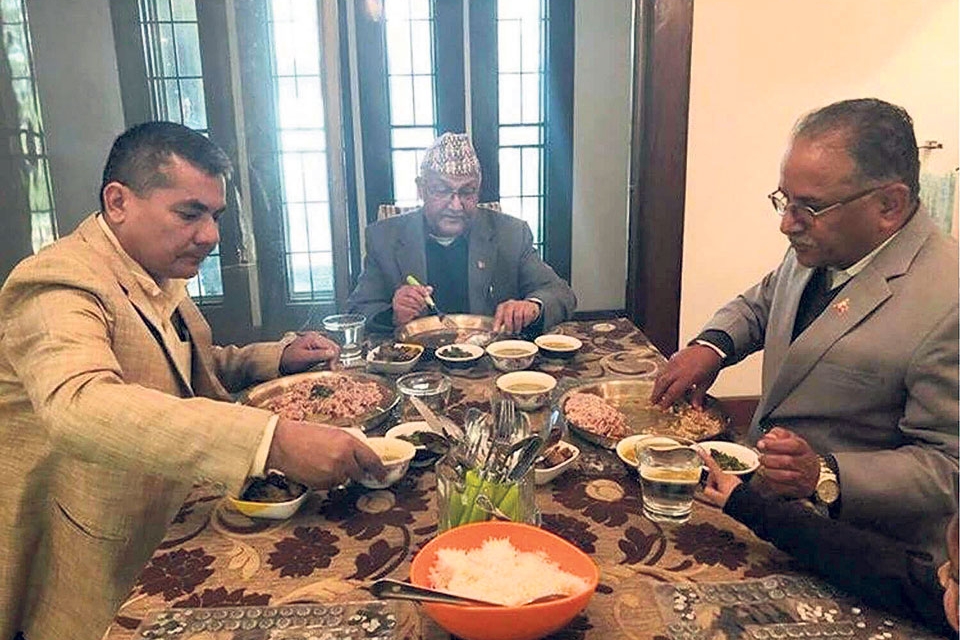 In 2018, Prasain came to public notice after a photo of him sharing a lunch with KP Sharma Oli and Pushpa Kamal Dahal in his house was widely shared and ridiculed on social media.
Former Vice-chancellors decry PM Oli, Education Minister’s move to pressurize handing of university affiliation to medical colleges
Read Time: 5 minutes

In a statement issued on Wednesday, 10 former vice-chancellors of various universities demanded to withdraw Kathmandu University’s (KU) decision to give affiliation to B&C Medical College in Birtamode of Jhapa district.
They said that the process of giving affiliation to the medical college was taken forward in an illegal and irresponsible manner.

Under the direct direction of Prime Minister Oli and Education Minister Shrestha, KU has started the process to provide its affiliation to B&C Medical College.

Prime Minister Oli had reached Jhapa on Tuesday and vowed that the college would soon get KU’s affiliation.

“The PM and Education Minister have adopted illegal and irresponsible measures by ignoring the law to give affiliation to medical colleges,” the joint statement said. 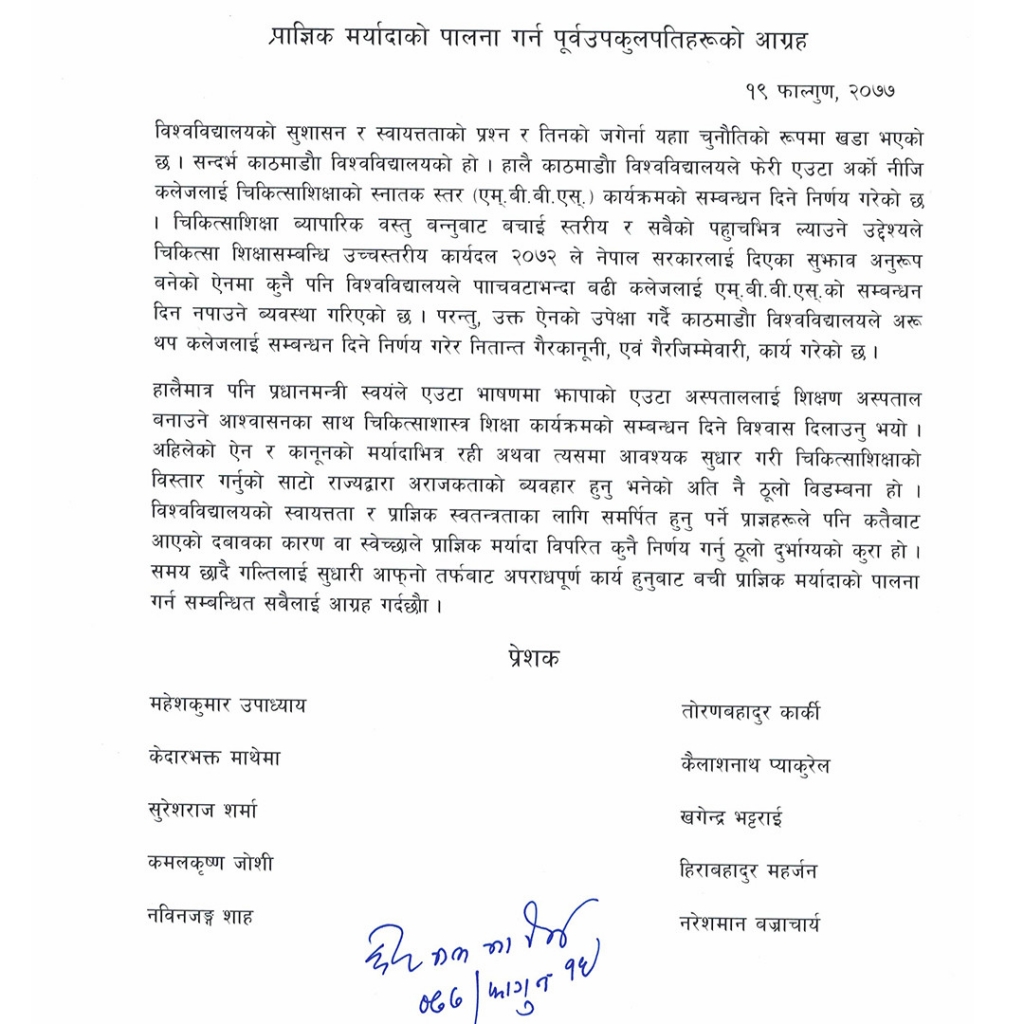 The Prime Minister and the Minister of Education, who are Chancellor and Vice-chancellor respectively of KU, during a meeting on February 24 had instructed officials to move ahead with B&C’s affiliation process.

Following the directive, KU Vice Chancellor Bhola Thapa and Registrar Subodh Sharma had written to B&C Medial College with a decision to expedite the affiliation process.

Rajendra Koju, Dean of KU School of Medical, had expressed dissatisfaction at the meeting regarding the decision saying that KU was not eligible to give affiliation to additional medical colleges.

Similarly, five members of the assembly had expressed dissatisfaction over the decision which they said was taken without any proposal or discussion.

Likewise, the Kathmandu University Professors’ Association has also objected to the decision saying that the issue of giving affiliation to B&C was not even discussed in the meeting, but still PM Oli and Education Minister Shrestha had bulldozed the decision.

A statement issued by the Association on Wednesday said the arbitrary decision was against the spirit of the movement for reform in medical education and past agreements reached with the government.

It is important to note here that Durga Prasain, executive director of Jhapa-based B&C Medical College Teaching Hospital and Research Center Pvt Ltd, initially courted controversy in 2016 when he said that female Nepali students in Bangladesh were sleeping with their professors to get medical degrees.

Though three women had sought legal action against Prasai under the Libel and Slander Act, 2016 and Some Public (Crime and Punishment) Act, 2027 for making such insensitive remarks, he was not subjected to any repercussion and the issue died gradually.

In 2018, Prasain came to public notice after a photo of him sharing lunch with KP Sharma Oli and Pushpa Kamal Dahal in his house was widely shared and ridiculed on social media.

In 2020, Prasain was arrested, after being on the run for nearly one month, after Vice-chairman of the Medical Education Commission Shree Krishna Giri filed a defamation complaint against him.

Prasain had accused Giri of demanding Rs 200 million in bribe for granting medical affiliation to his college, an allegation that Giri denied.

The District Administration Office, Bhaktapur ordered his release on a general date after Prasain appeared before the administration office.

Prasain has also been critical of anti-corruption crusader Dr Govinda KC for the latter’s hunger strikes demanding better medical education and health access for all Nepalis.

In 2019, the Oli-led government had bulldozed the National Medical Education Bill through the parliament despite protests from various sides, without incorporating all the points of the nine-point agreement signed between the government and Dr KC.

Dr KC had staged his 15th hunger strike in 2018 demanding that the Medical Education Bill be endorsed by incorporating all the recommendations of a panel formed under Kedar Bhakta Mathema.

Though Prime Minister Oli in 2018 had assured the orthopaedic surgeon that the bill would be endorsed as per the agreement, a year later, the PM did not keep his words and tweaked the bill before getting it passed.

Dr KC has staged 20 fast-unto-death strikes in the past demanding an end to political interference in the country’s medical industry, reforms in medical education sector, construction of government hospitals in all 77districts across country, and making healthcare affordable as well as accessible to all Nepalis.