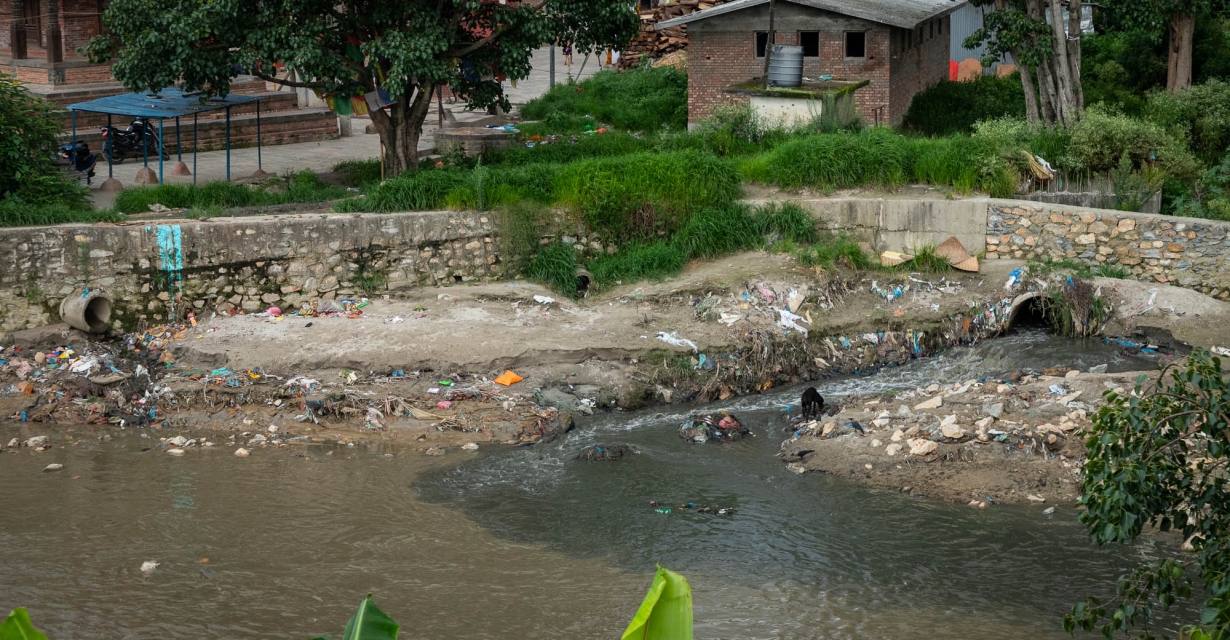 One of the most brilliant interventions in human history is arguably an unexpected one: the toilet. We use it every day with hardly a second thought for what lies beyond the shadowy pipe we see when we peer down our commodes. Out of all the types of waste society produces, perhaps the one we turn away from the most is “liquid waste,” the term for our biological excrements. The proper management of this kind of waste, including establishing and running water treatment facilities, is complex and time-consuming.

For most of us wondering where Kathmandu District’s wastewater goes, there is no question that it eventually mixes with the Bagmati River. Yes, even fecal matter eventually ends up in this precious natural resource. Yet, an important question remains. How much of Kathmandu’s wastewater is treated before it returns to the river? 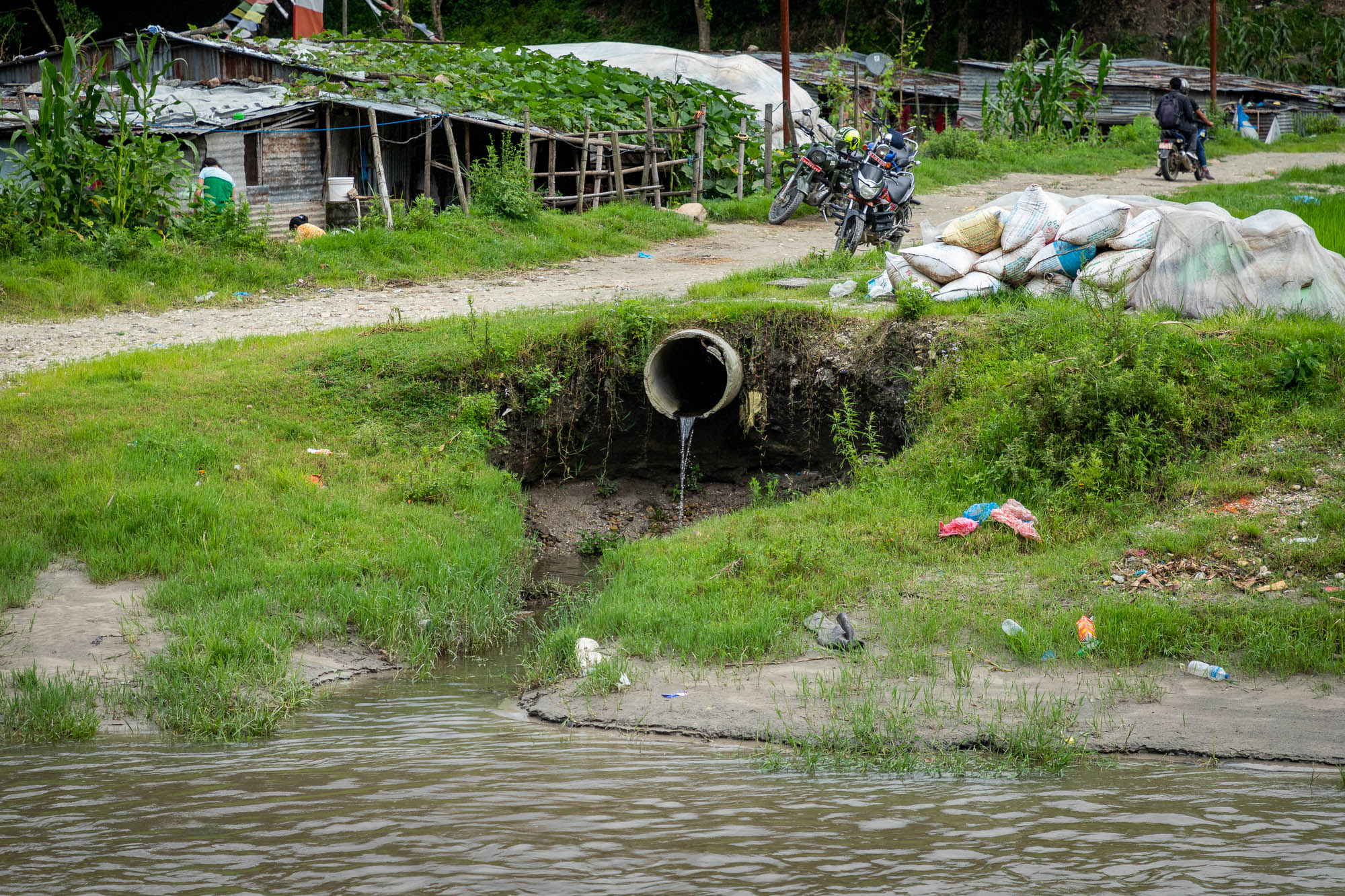 Gokarneshwor Municipality is a relatively new municipality, formed after merging Sundarijal, Nayapati, Baluwa, Jorpati, and Gokarna Village Development Committees in 2014. It is in this municipality where the source of the Bagmati River lies, inside the Shivapuri National Park at a place called Baghdwar.

Sabina Shrestha’s house lies inside the confines of Shivapuri National Park. Her house is not connected to municipal sewer lines. Therefore, her family has built a septic tank to fulfill their sanitation needs. Because Sabina’s house is also inaccessible by vehicles, she is unable to call a septic tank disposal truck when her septic tank is full. As a solution, the family manages their household fecal waste by themselves.

Yet, they do not dump their waste into the river, like so many others who live downstream. When asked why, she says, “The river is our source for drinking water and other household work. We can’t contaminate the water we drink with our own waste, can we?”

Sabina Shrestha stands in front of a shop in Gokarneshwar Municipality. Her family relies on the Bagmati for drinking water and other household use. They are one of the few households that have decided to manage liquid waste without dumping it into the river (Image: Nishant Singh Gurung / Aawaaj News)

For thousands of households who are connected to sewer lines in Gokarneshwor, their wastewater does inevitably end up in the Bagmati River. Kathmandu Upatyaka Khanepani Limited’s Project Implementation Directorate is planning to build a Decentralised Wastewater Treatment System (DEWATS) in the municipality, which is projected to be able to treat up to three million litres of wastewater every day, a much-needed relief to the Gokarneshwor residents and the Bagmati River.

From Gokarneshwor, the Bagmati River winds its way down to Kathmandu Metropolitan City (KMC). According to Ram Bahadur Thapa, Chief of the Public Works Department in KMC, all households are connected to sewer networks. However, like in Gokarneshwor, reporting on wastewater management in KMC is tricky.

According to the preliminary findings of the 2021 National Census, 845,767 people live in 105,649 households in the Kathmandu Valley. The only active treatment plant in the valley is the Guheshwari Wastewater Treatment Plant. This plant has the capacity to treat 32.4 million litres per day with a catchment area of 7.2 square kilometres, which includes areas upstream of Guheshwari along the Bagmati River such as Jorpati, Mulpani, Bouddha, Chabahil, and Gaushala. For KMC residents living downstream of the Bagmati, and in other areas of KMC, their untreated waste inevitably ends up in the river, creating environmental and health hazards.

Although the government has worked towards centralizing wastewater dumping into the Bagmati near Dhobhighat, where two wastewater treatment plants are supposedly under construction, leakages can be found in some areas.

Wastewater from local residences joins the Bagmati River in Kirtipur. In the background, the ancient town of Kirtipur can be seen from where the wastewater eventually enters the river (Image: Pankaj Thapa / Aawaaj News)

After winding its way through Gokarneshwor and KMC, with areas within Lalitpur District on its other bank, the Bagmati River meanders through Kirtipur Municipality, an urban settlement at the edge of the valley.

Gyan Bajra Maharjan, the Water Sanitation and Hygiene (WASH) focal person for Kirtipur Municipality, reports, “74% of the wastewater produced is untreated and dumped in the nearby Bagmati River. Kirtipur too is waiting for the completion of the Dhobhighat Wastewater Treatment plant as we view it as a solution for our wastewater problem.”

According to available data, 67% of wastewater is managed by the sewer system and 8% is managed by individual households through the use of septic tanks. The rest is unmanaged. However, the municipality is brainstorming a possible treatment plant in Kirtipur and is currently executing waste management intervention at a household level to reduce the amount of waste produced.

Kirtipur Municipality has drafted a Citywide Inclusive Sanitation Plan and is in the process of implementing it in the upcoming fiscal year. The plan focuses on increasing the municipality’s sewer network alongside implementing small-scale community-based solutions for waste management.

“We are focused on community-based planning and actions, as that is where real change is seen,” says Maharjan. The people of Kirtipur and the Municipality officials are working together and are engaged in finding solutions. Although waste management has historically been unsustainable and mismanaged, they are determined to change that in the coming years. 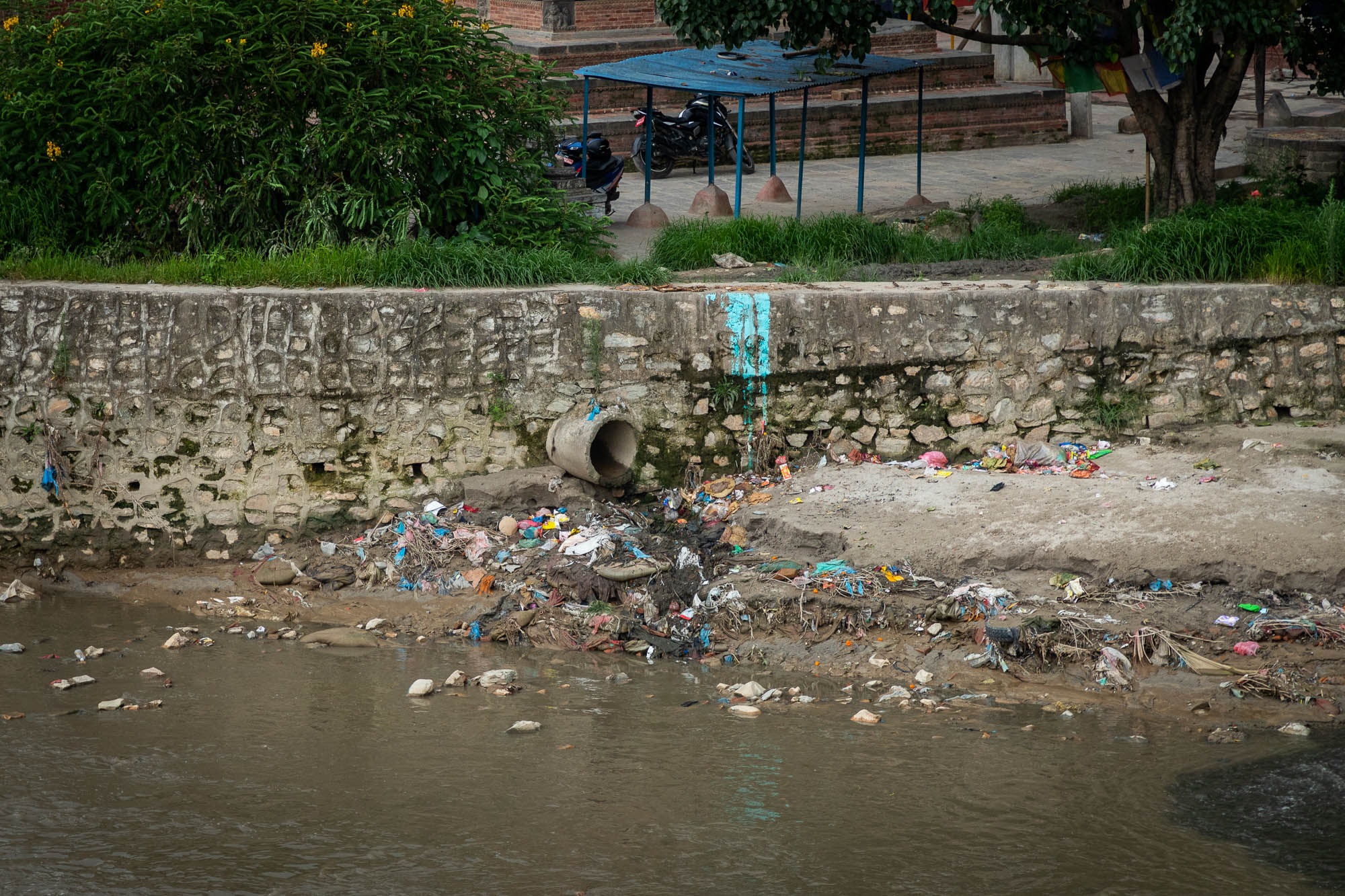 According to Dr. Sher Bahadur Pun, Infectious Disease Expert at Sukraraj Tropical and Infectious Disease Hospital, “Dumping wastewater into rivers can create a hotspot for water-borne pathogens to thrive. Diarrhea, Typhoid, and Cholera are some diseases that can come from polluted water sources. As we’ve seen with the current spread of Cholera, unsafe water sources make it harder to solve already existing public health issues on top of creating new ones.”

At the end of the day, our fecal waste somehow ends up in the environment. Wastewater should be treated and turned into a clean end product before it is deposited into a river or reused. Treatment plants play a critical role in public health and environmental sustainability. Until the DEWAT Plant comes into operation in Gokarneshwor, and the Dhobhighat Wastewater Treatment Plant comes to the rescue of KMC and Kirtipur residents, the metropolis and municipalities have no option but to discharge their wastewater into local rivers.

While we, the public, wait for treatment plants to come online, we can take an active role in our own water usage by being conscious of how much water we consume. By reducing our wastewater discharge, we can help protect our rivers from degradation and ourselves from serious public health hazards