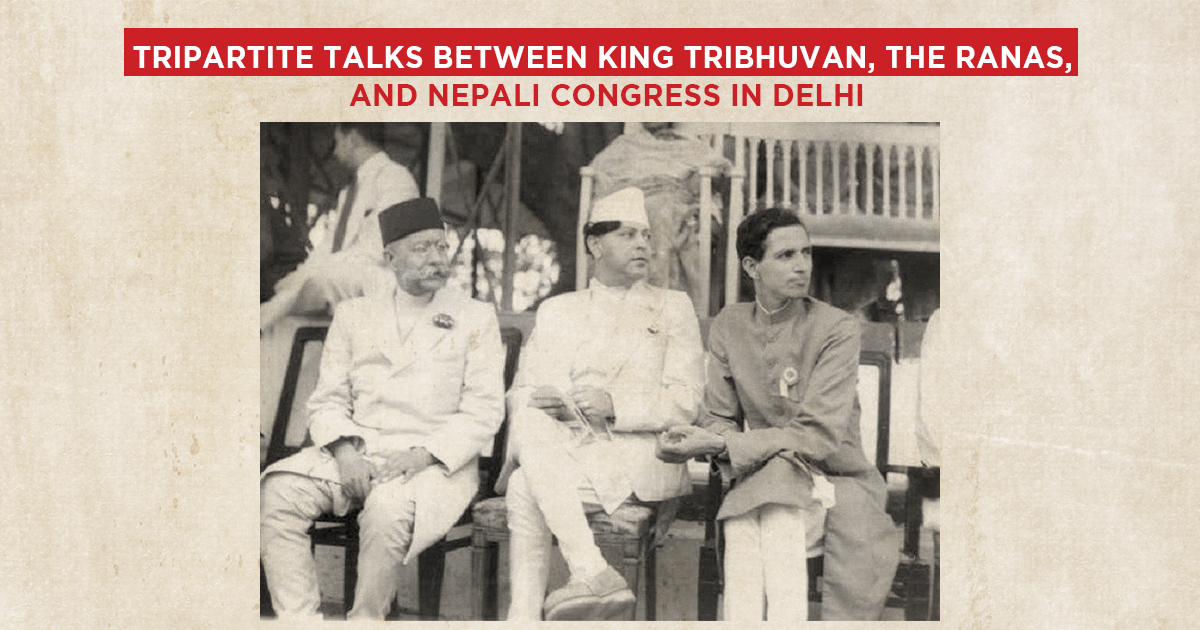 After Mohan Shusmher’s Proclamation, the tripartite talks between King Tribhuvan, Rana government, and Nepali Congress were to begin soon.

Nepali Congress, especially B P Koirala was insistent the talks should be held inside Nepal, and proposed Biratnagar would be an ideal location. However, King Tribhuvan raised the issue of unavailability of proper lodging facilities and other insecurities. Therefore the Indian government, who was playing the role of a mediator, rejected the proposal.

For years, B P Koirala would be heard saying, had the talks been held in Nepal, Nepal’s political spectrum would be completely different.

However, India, being the mediator, would not let each other meet without their consent.

They would meet each side separately and never allowed all the sides participating in the parley to meet an one place and exchange their views and opinions.

The tripartite talks were still successful though – because all three parties were in agreement that the King would serve as the constitutional monarch while ushering in other democratic reforms.

Nepali Congress also put forth several other conditions. They asked for important ministries, including the Home Ministry to develop a new model of administration. They said the ministers should report to the King and not to the Prime Minister, and asked for a high proportion of ministers in the newly formed cabinet. And lastly, they said the proposed political reforms should be announced by the King, and not by the Rana PM Mohan Shumsher. 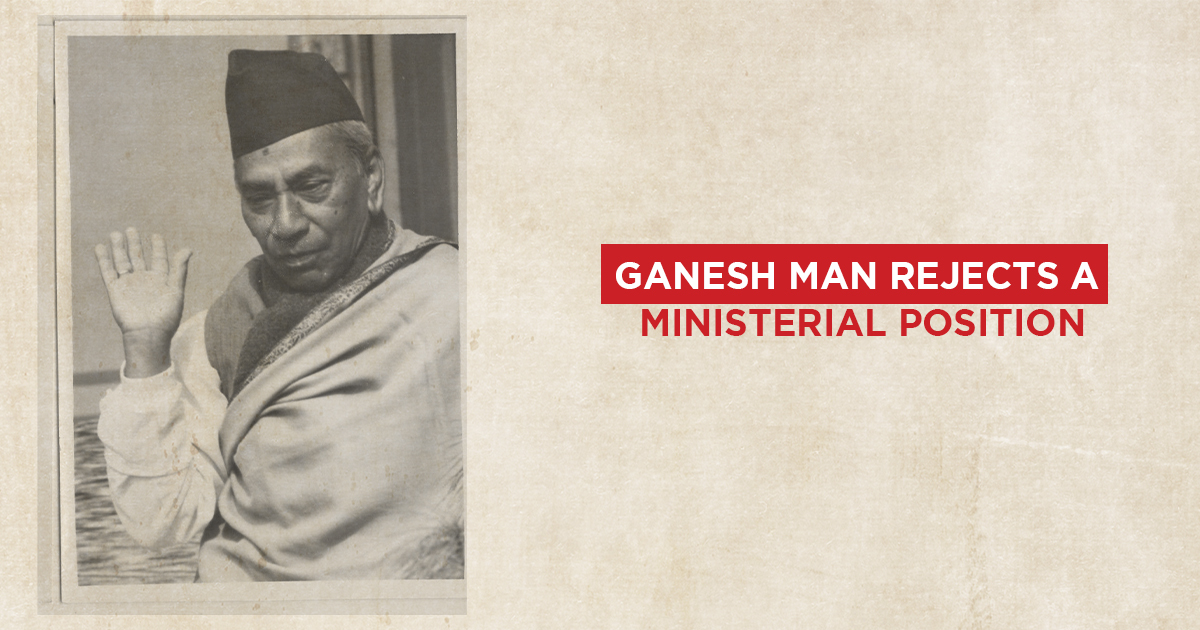 Singh, who was spending his days in Bhadragol Jail with other inmates, several who were his political friends, was still critical of Nepali Congress’s decision to join the tripartite talks. He also shared his frustration to Mathbar Singh for being inside jail during such a crucial time.

“I was unable to present my views and my thoughts to my friends of the Party”, Singh would tell Mathbar Singh. “I had become a mere spectator as the trio participated in their talks”, he added.

Meanwhile, Singh received news that B P Koirala had nominated his name as a minister in the new cabinet.

Singh was in a fix – he would have to make a public statement about his rejection of the offer. From his jail, he wondered how his statement would affect the ongoing talks.

“You must accept the leadership position”, Chalise told Singh.

“How can I accept a ministerial position headed by Mohan Shumsher whose rule we are trying to overthrow? What answers will I give the martyrs?” Singh told Chalise.

“If the Party decided to join the talks, it must have had the best interests of the people of Nepal. The Party has decided to make you a minister, and you must accept the Party’s decision”, Chalise answered back.

“If you do not accept the offer, you will have betrayed the people of Kathmandu”, Chalise added.

Singh however was not convinced, and decided to write a letter to Matrika Prasad Koirala rejecting the offer of the ministerial position. 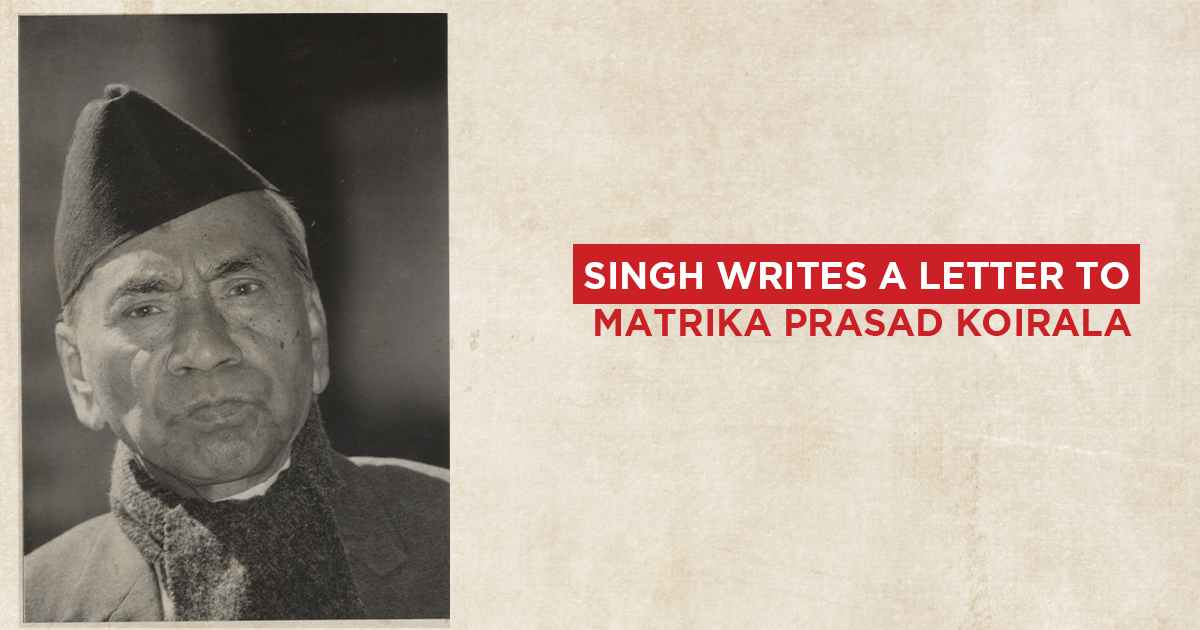 The letter, confidential in nature, had to be passed with care. Singh entrusted the letter with Sundar Raj Chalise, who in turn would pass it to other trusted people who would pass the letter to friends outside the jail.

“I learnt the decision to not send the letter was a collective decision. Sundar Raj Chalise, and other members arrested in the Indra Jatra plot believed they would lose representation in the Party if I rejected the ministerial position”, Singh shared with Mathbar Singh.

Meanwhile, Singh learnt that the B P Koirala’s recommendation as Ganesh Man Singh as one of the minister’s from Nepali Congress was met with severe criticism from the Ranas. Furthermore, because Singh was still inside jail, to make Singh a minister imposed several procedural complications.

B P Koirala therefore had to abandon the idea of making Ganesh Man Singh a minister – not for long though, Singh was to be released from jail very soon. 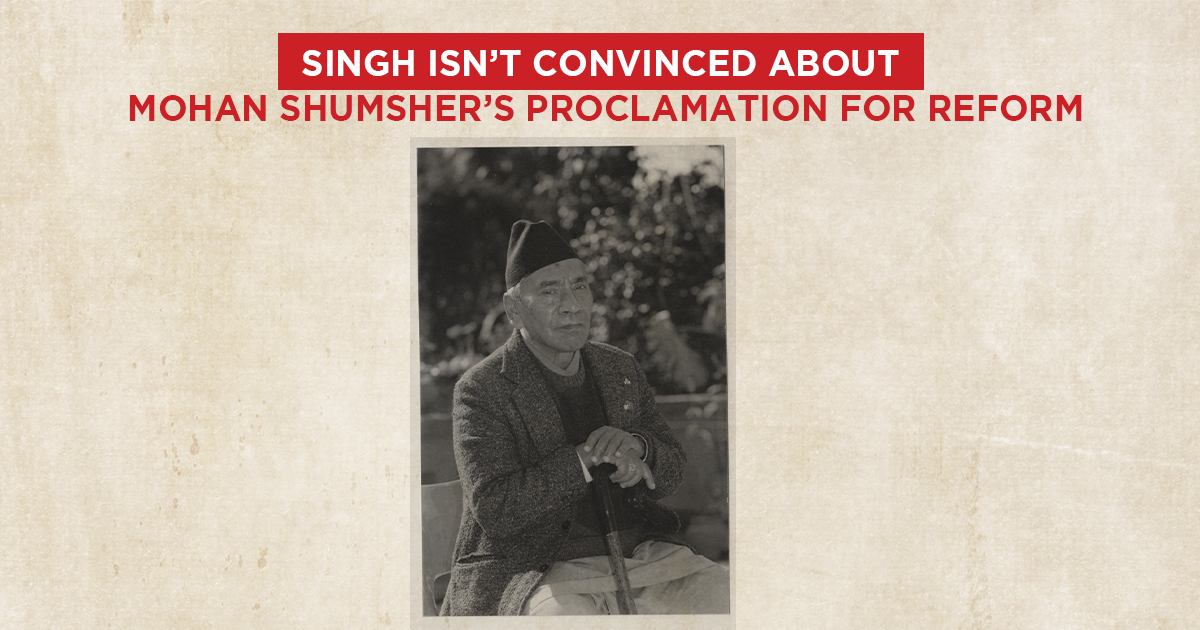 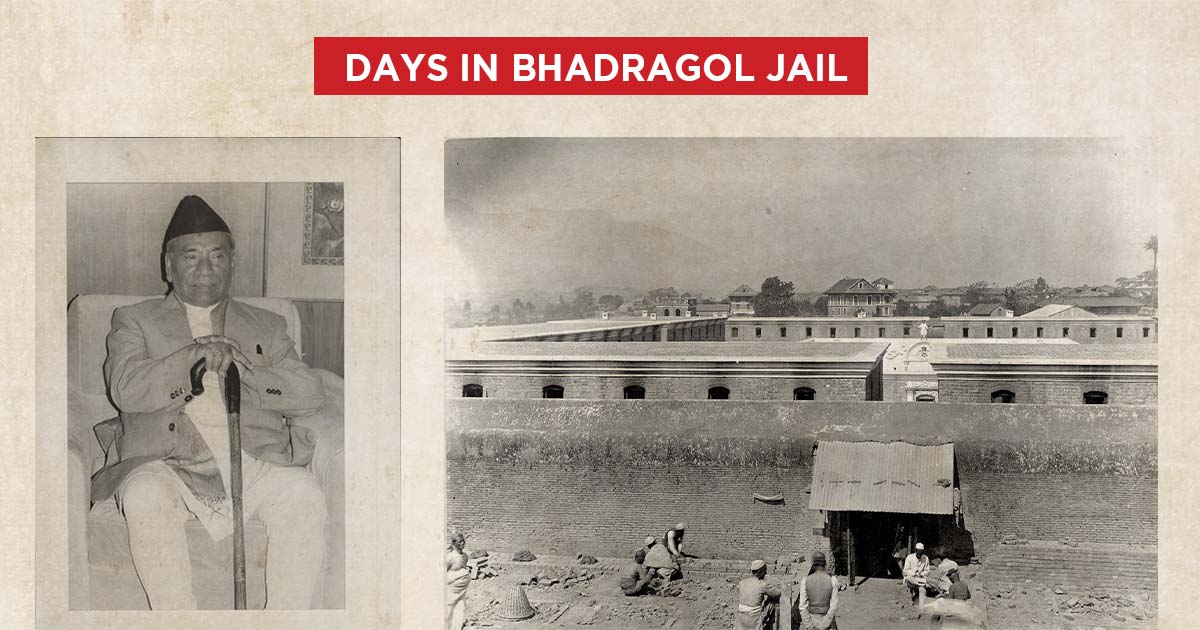