Following the 1846 coup (Kot Massacre) by Jung Bahadur Kunwar Ranaji in Kathmandu, the monarchs had been reduced to a ceremonial figure:

“By virtue of the supreme authority vested through the instruments of their sacred Panja-patras by Shree Panch Maharajadhirajas of Nepal, dating from the Sambat year 1903 onwards, delegating all powers of the State upon the contemporaneous Shree Teen Maharajas”

First, the revolutionaries thought of taking King Trihbuvan to Gorkha and make him revoke the Panja Pantra of B.S. 1903. The king would declare himself in power, and then formulate a democratic constitution. However, owing to the situation in Kathmandu and Gorkha, the plan seemed impossible.

They therefore thought of a second plan – to take the King to Palpa instead.

Then, General Rudra Shamsher was the Governor of Palpa. The general harboured anti-Rana feelings as he was driven to Palpa after having his name removed from the line of succession to Nepal’s Prime Ministerial position.

In fact B. P. Koirala had already travelled to Palpa in secret and met with Rudra Shamsher. Rudra Shamsher had assured Koirala of the necessary arrangements to provide King Tribhuvan shelter.

Now, the next problem remained “how to take King Tribhuvan to Palpa”?

For the purpose, direct communication with the Palace was required. They also needed a helicopter for which they wished to take the help of the Indian Embassy in Kathmandu.

In Kathmandu, other revolutionaries were also planning a mutiny against the Rana rulers – to be carried out during Indra Jatra.

Therefore, it was decided Ganesh Man Singh would travel to Kathmandu to organise all the above tasks. 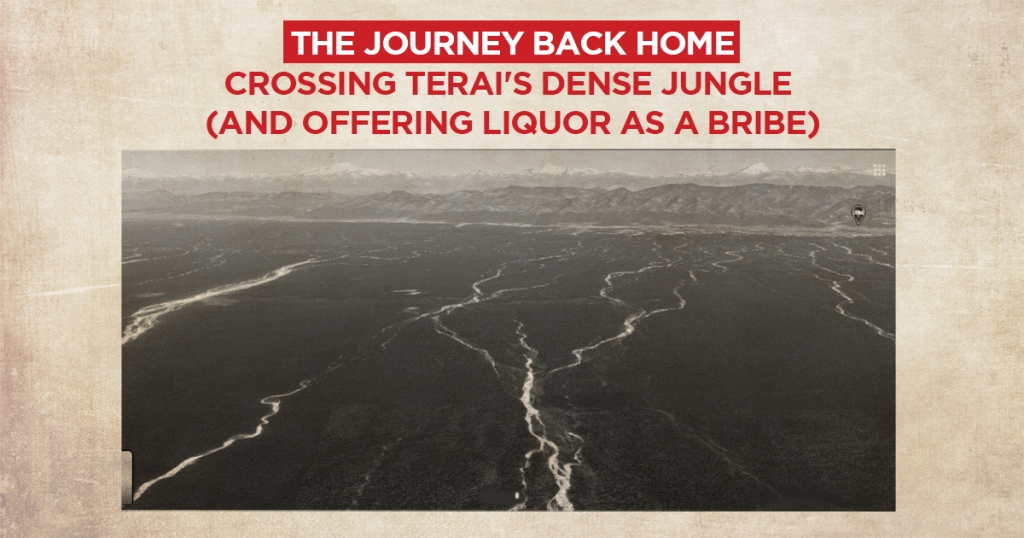 For Ganesh Man Singh, travelling to Kathmandu meant putting himself at risk (as he was still wanted on charges of escaping jail by the government of Nepal). He was therefore assigned a strong team – under the leadership Dilman Singh.

Therefore, 13 members including Sundar Raj Chalise and others set off to Kathmandu. They opted to take the route of Sarlahi-Banepa via Sindhuli and Dhapcha – also known as the ‘chor bato’ (smuggling route). It was an unfrequented and inaccessible track, and used by people smuggling buffaloes from India to Nepal, or imported cigarettes into Nepal, etc. It was also the month of Ashar (June-July), peak of monsoons, which meant the plains were going to be hot, and the rivers swollen.

Singh and team entered Nepal via Sarlahi and were immediately met with a dense forest. At the time, Nepal’s entire southern belt was covered in dense jungles – today, much of it has been lost to human settlements and other development activities.

“At the time, the forest in Madhes used to be so dense that it would appear dark during broad daylight too”, Singh would tell Mathbar Singh. “Plus, it was raining cats and dogs which meant we, and our luggage was constantly wet. We would also come across small rivulets with hip-deep water”, he added.

“Trudging along with weapons and baggage, plus the rain, the journey wasn’t pleasant at all”, Singh told Mathbar Singh.

On the third day, Singh and friends arrived on the shore of a river which had to be crossed via a ferry. It was late evening and night was about to fall. They met a boatman, but he was reluctant to ferry them across. Plus the boat was small which meant the boatman would have to make several trips.

Eventually, Singh and team convinced the boatman to ferry them across – for each trip he made, they gave him one peg of brandy. He made seven trips.

Elephant back ride across River Marin:

Continuing along, Singh and team arrive upon River Marin. The river was swollen and seemed angry, and showed no signs of abating. After several hours, they heard a rustling sound in the jungle behind them.

An elephant and its rider (mahutey) appeared. The elephant belonged to a landlord in the Terai, and Singh and team asked for help to cross the river. Although initially denying help, the mahutey changes his mind after seeing a bottle of brandy.

While riding an elephant without a seat, all riders must hold each others’ backs, and the rider behind the mahutey should hold the mahutey’s back. If one person also does not comply, everyone falls down.

Singh instructed everyone to do the same – however as luck would have it, he himself forgot to hold the mahutey. When the elephant rose, everyone else tumbled.

Nevertheless, the mahutey is successful in crossing them all in 3 trips.

“The river was very fierce, at several times threatening to take the elephant along” Singh tells Mathbar Singh.

After crossing the river, D S Lama, the radio operator looks for food in a nearby village. All village men have gone fishing to bring food for their family members, and there are only children and women in the village with nothing to offer Lama. After much desperation, a village woman gives him bamboo shoot and wildflower bulbs – having consumed that on an empty stomach, Lama falls ill. He also begins to run a temperature and team members suspect he has been infected with malaria.

There are no health facilities in the area, and it was impossible to avail medicines. The team members frantically look for a Majhi (boatman) to carry Lama – and fortunately find one who is skilled in the task. Thus, the team continues their journey forward.

“History remembers only the dates of revolutions and its leaders. Numerous citizens, unknowingly also contribute towards a nation’s history – yet each contribution isn’t taken into account. The Mahutey who helped us cross the river, and the Majhi who carried Lama are such contributions. May be history does not remember them, but history cannot be made without the contributions of such selfless sons and daughters of the soil”.