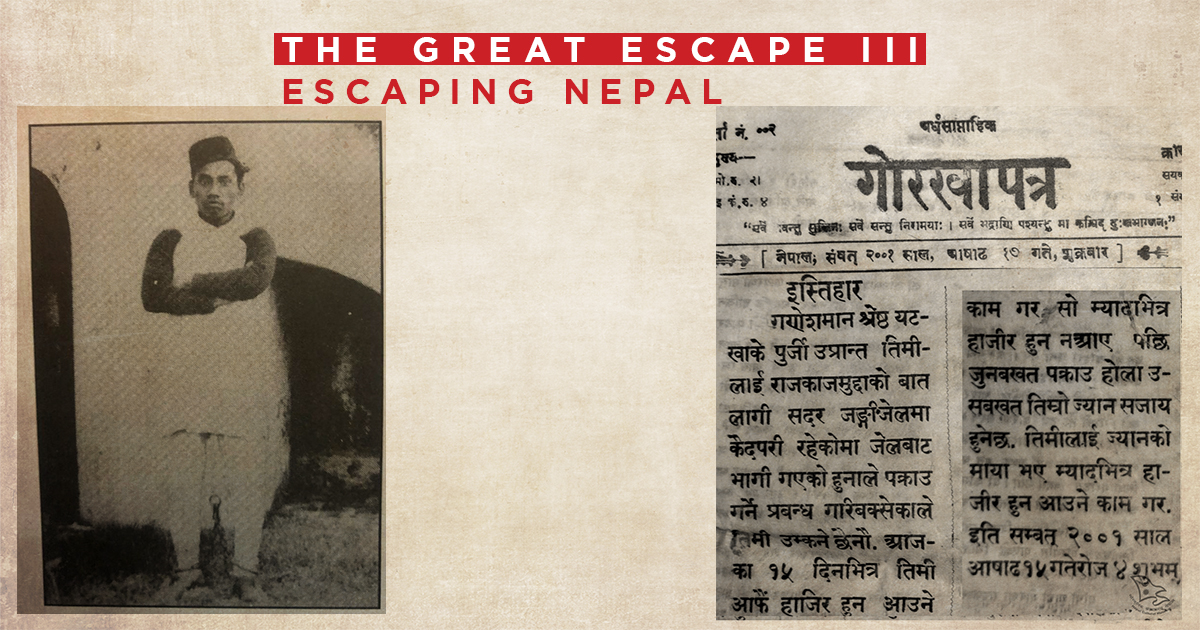 On the fifth day of his escape, after four days of walking up and down the hills, Ganesh Man’s body was starting to feel his body give in to his tiredness. His legs hurt badly, and there were blisters on his feet. Despite the pain, he continued, and managed to reach Gorkha.

Singh was resting under a tree when an ascetic inquired about his intentions.

“I am headed to Manakamana Maisthan, and then to Butwal”, Singh answered.

“But you’ve already reached Gorkha Bazaar. You have crossed the way which would lead you to Maisthan”, the ascetic exclaimed.

Singh had no option but to act shocked. He also realized he had to change his narrative.

The ascetic offered him shelter for the night, and Singh gladly obliged.

The ascetic would live in a small hut under a torn roof with his wife and children. Singh was offered a bed in the outer room, but the host was concerned what Singh would do if it rained. Therefore, when a cousin passed by the ascetic’s home, the host sent him along.

The cousin was much better off financially – whereas the earlier host could only share a plate of puffed corn, here, there was rice, corn dough and dairy in the second home. Singh enjoyed both –the puffed corn and the rice and yoghurt.

The following day, Singh tried to reach the Gorkha Durbar, however it was closed until 11 a.m.

Deciding not to wait, he carried onward – however not for long. His legs and blisters would not let him.

Unable to proceed, he sat beside a stream – until a well dressed lady arrived to fetch water. Going by the appearance, Singh assumed the lady worked for the durbar.

Meanwhile, a Chhetri woman, friend of the first lady too arrived and was willing to provide shelter to Singh. She called out for help, which arrived in the form of four elderly men. (All the young men had left the village to serve the British Army)

Once at the Chettri woman’s house, Singh’s wounds were taken care of. His blisters were pierced, which burned like hell, but immediately the lady would pour lemon and vinegar which would soothe the burn.

An exhausted and injured Singh rested in the home for four days – well fed and almost fully recovered, he continued his onward journey. 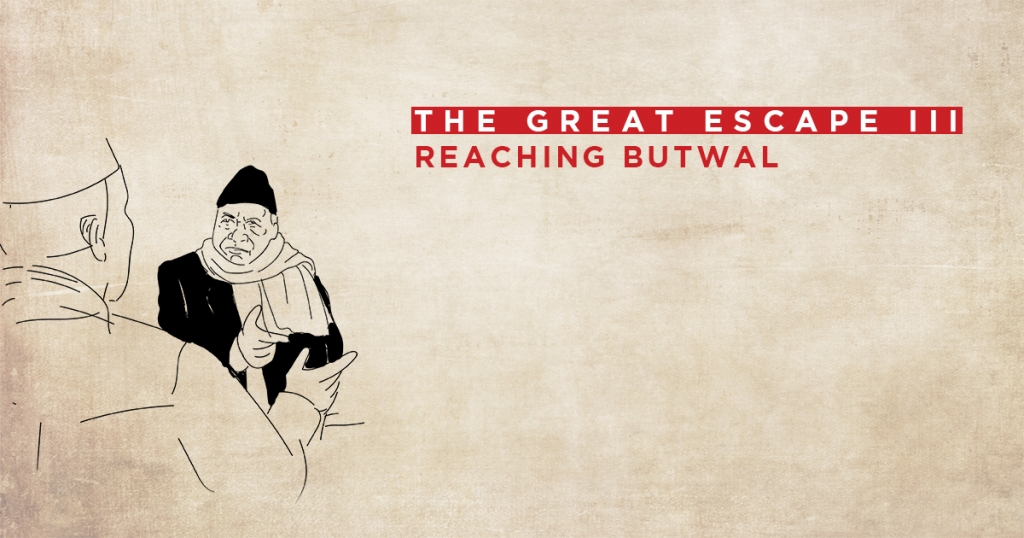 Thinking it would be an act of kindness, Singh gave one rupee each to the four children of the household.

No sooner had he left the home, he heard a familiar voice calling him out. Below, Singh’s hostess was following him, a little furious.

“You think we take money from guests? Take this money back”, the hostess said holding the money in Singh’s hand.

Singh later tells Mathbar Singh that he was actually glad he got the money back.

In the evening, Singh reaches the Lete River. Being the month of Ashar, the river had swollen. Around 20 women were waiting for the spate to subside – but it didn’t seem likely.

Upon seeing Singh, the women asked him for help – Singh gladly obliged and helped them one by one.

After crossing the last woman, he continued along his path – tired of trudging tracks across villages, Singh took the main road to Syangja.

From Syangja, he reaches towards Tansen, Palpa, and continues onward towards Butwal.

Just before reaching Butwal, there used to be a checkpoint. Singh would have to plan his escape.

The route being a major trade route for regions like Palpa, Pokhara, Baglung, Thak, Gulmi, Pokhara and Mustang was busy with porters – Singh decided to disguise himself as a porter.

Walking alongside the porters, Singh reached the checkpost – however the Kharidar (officer) wasn’t convinced Singh was a porter.

Calling Singh out, the officer questions him,

Kharidar: Where are you headed?

Singh: To fetch my mother. There was a small argument at my home, and I believe my mother has gone to my uncle’s place who lives in Butwal.

The officer looks at a guard and asks him if he knows any Krishna Bahadur from Butwal.

The bewildered guard tells him there could be hundreds of Krishna Bahadur’s in Butwal, how would he know.

Singh no longer needs to wait for the porters and proceeds ahead without them. 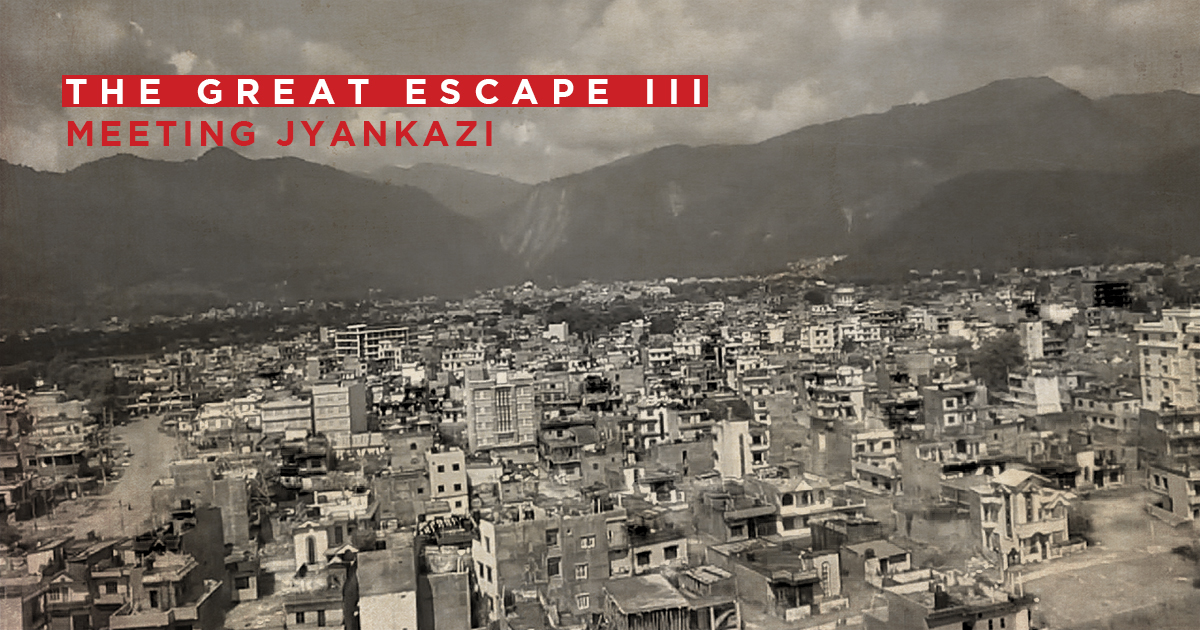 After reaching Butwal, Singh’s task was to look for Jyankazi, an old friend during his good times in Kathmandu.

Words from Singh’s grandfather were ringing in his ears:

“All your friends will only be with you during good times – once you are broke, they will leave you”, Ratnaman Kazi would tell Ganesh Man Singh.

“Time to see if he is really a good friend”, Singh told himself as he began his search for Jyankazi.

Butwal was a bustling city – Singh describes passing by shops with hot jelebis being dipped in chasni, attractive shops displaying a wide variety of goods. Singh was tempted to eat something, but he had to find his friend first.

Singh also had another traveler with him – a man who had joined him from Syangja. The poor man was on his way to Butwal to purchase cattle. Ealrier, his wife had gotten mad at him for purchasing a calf for Rs. 25. Singh asked the poor man to help him find Jyankazi – in return Singh would give him Rs. 100.

With the help of the same man, Singh was able to locate Jyankazi.

Jyankazi turned out to be a helpful friend – he took Singh to his house. In Jyankazi’s home, over a meal of rice and chicken curry, Jyankazi suggested the following:

“You’ll need to stay somewhere else. If intelligence has already arrived from Kathmandu, my house will also be monitored. I have a relative at the custom office, you can hide there. Meanwhile, what do you need?”

He said the same in a whisper, afraid his wife would hear him.

Singh agreed, and said he will need some money to reach Calcutta – Rs 400 in NC, and Rs. 1000 company notes (Indian Currency). He also asked for Rs. 100 for his friend from Syangja, and a set of clothes which would make him look like a trader from the plains. 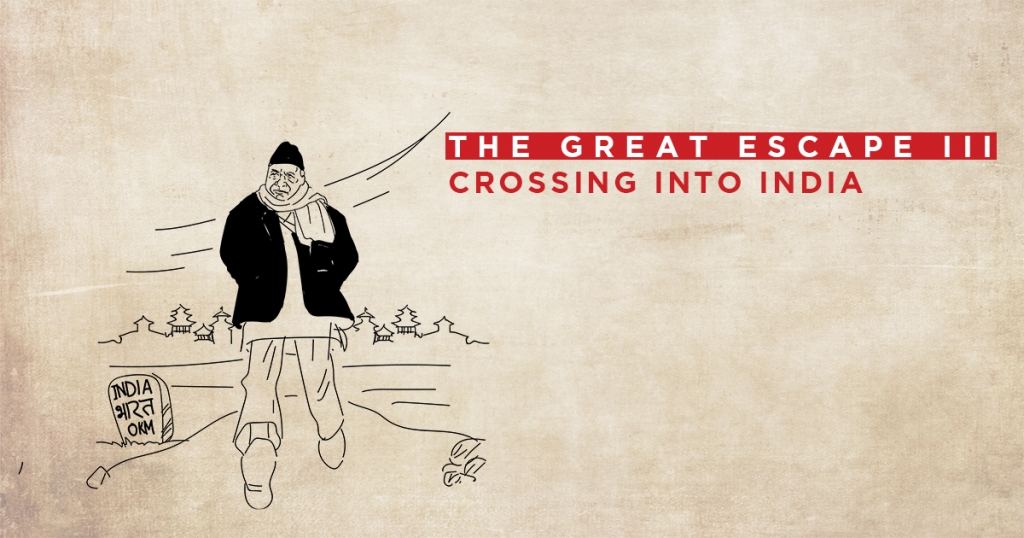 After arranging the money and the clothes, Jyankazi and Ganesh Man Singh headed to the bus stop. At the time, there were only two places where buses operated – one of them was the Bhairawaha-Khasyoli route. The road was muddy and would raise a trail of dust when passing over the street.

The road was built by Khadka Shumsher. Khadka, who was sent to Palpa by Bir Shumsher would roam around his administrative region – therefore paving way for the development of the road, and even approving the excavation of Lumbini. Khadka Shamsher was actually sent by Chandra Shumsher to avoid the possibility of any conspiracy for the post of the Prime Ministership.

Although Singh’s journey to the Indian border was uneventful, Jyankazi encountered an incident. After dropping Singh at the bus stop, Jyankazi noticed extra police security around the area. Reaching out to one of the officers, Singh asked:

“A dangerous dacoit has broken jail in Nepal. His photo is published in the Gorkhapatra, and is expected to arrive here”, the officer replied. 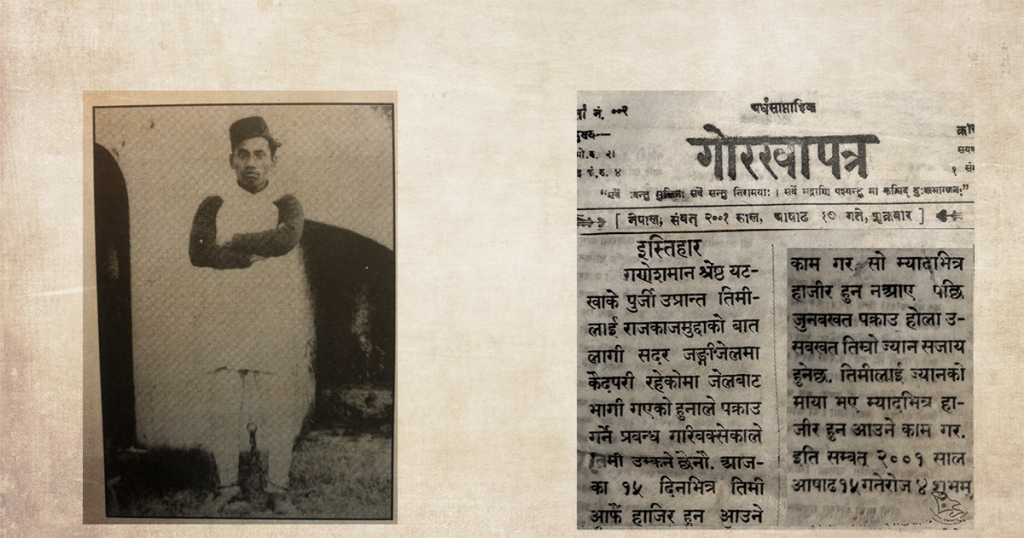 Left: An image of Ganesh Man Singh in shackles taken during his time in Bhadragol Jail; Right: The notice in Gorkhapatra.

Translation of the Gorkhapatra Text:

“Ganesh Man Singh of Yetkha, who has been accused of treachery, and has escaped jail – you will not escape the orders of the state. If you do not surrender within 15 days of this notice, you will be sentenced to capital punishment upon being found. If you love your life, report to authorities within the stipulated time. Issure on B.S. 2001, Ashar 15 (27th June, 1944), 4 a.m.

Jyankazi, who was a little shook, looked towards the bus stop – but the bus had already left, leaving a trail of dust behind it.

He silently breathed a sigh of relief. 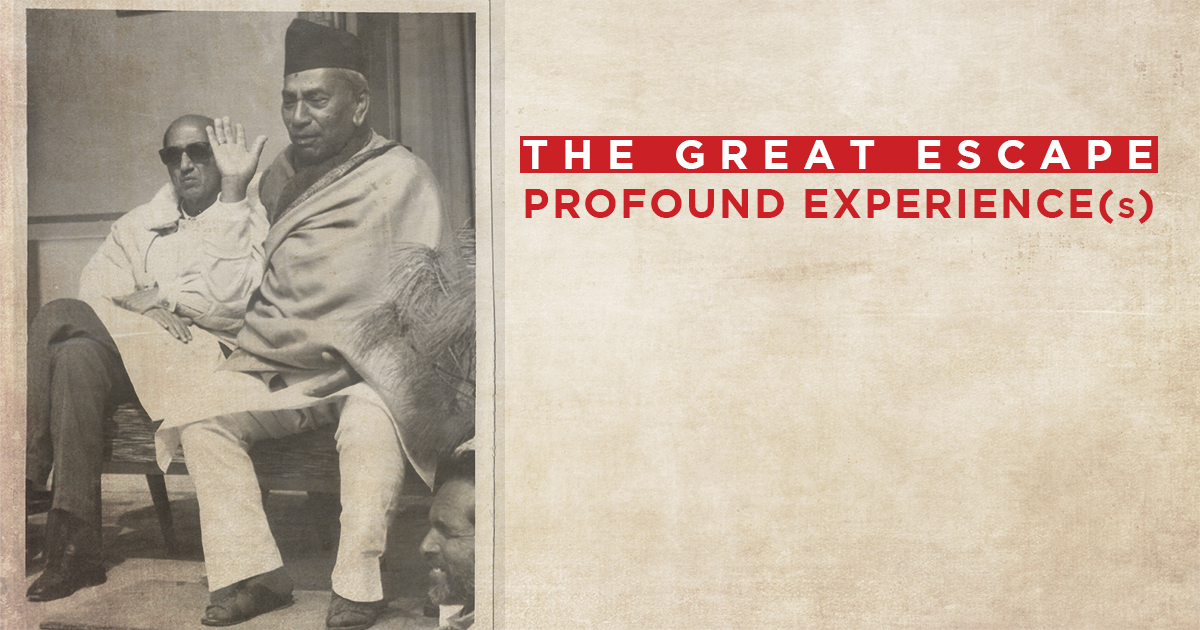 The Great Escape – Dinner in the Hills, a night with the Majhis and caste system en route 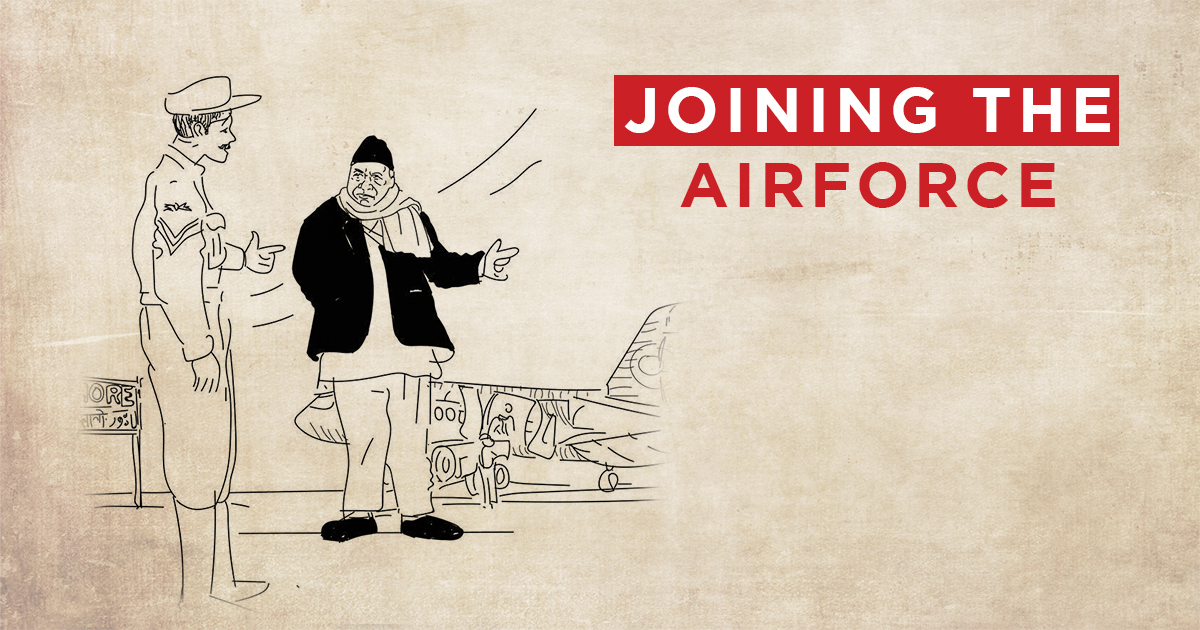