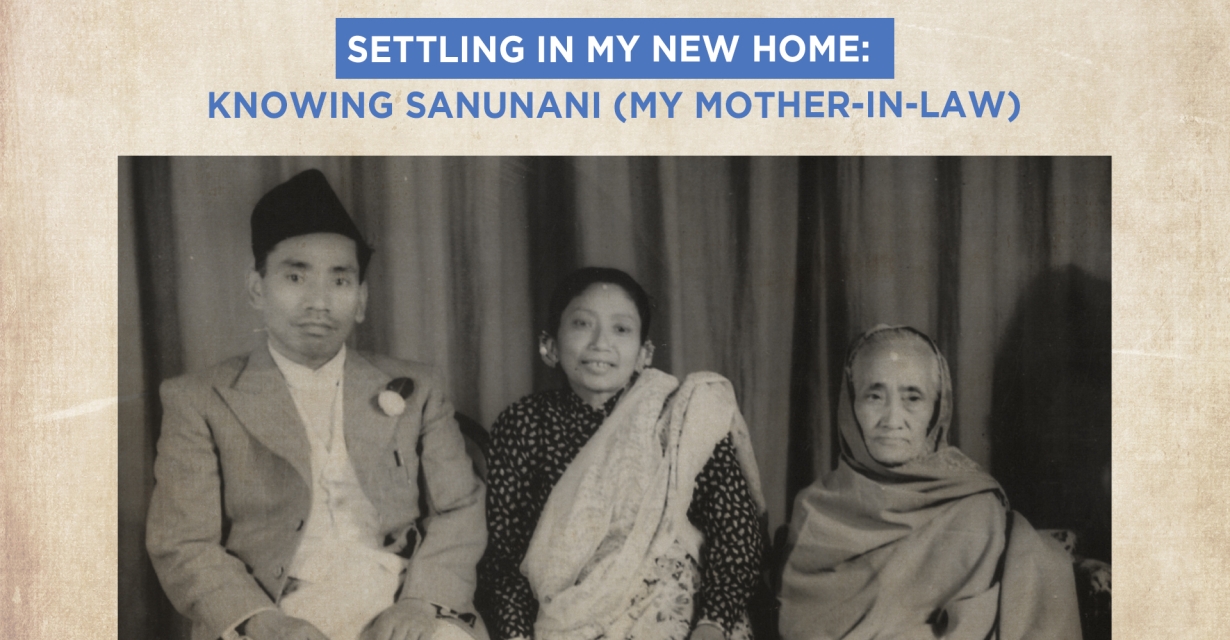 Settling in my new home: Knowing Sanunani (my mother-in-law):

The only person I knew in my new home was my mother-in-law Sanunani Shrestha Singh. Related to me from my mother’s side, I had seen her in a few family functions before my marriage to Singh. A well spoken, mannered lady, who would always hold her head high, she had a distinct personality.

Coming from a prominent business family in Bhedasingh, she carried her household duties and social obligations with grace and virtue. Singh’s father Gyan Man Singh had died at an early age, widowing San unani. However, she, or Singh were not discriminated or subjected to unjust behaviour at the Singh home.

Singh, an unruly kid during his childhood years, was raised with the love and care of his mother Sanunani, and other members of the household, the biggest influence being his grandfather – Badaman Ratna Kazi.

Ganesh Man Singh lost his father Gyan Man Singh at an early age; his own grandfather too had passed away at the age of 33, and was therefore raised by his eldest grandfather Ratna Man Kazi. Ratna Man Singh, who served as a Sardar during Ganesh Man Singh’s birth, was Kazi during our marriage, and became Badakazi during Judhha Shumsher’s premiership.

Ever since my marriage, I had the love and respect of Bada Man Ratna Kazi, and therefore most of my household duties were limited to taking care of Badaman Kazi.  Being the household of a respected Kazi, there wasn’t much household work for daughters-in-law anyways. A plethora of help was available for all household work.

My responsibilities therefore were centred around Badaman Kazi – putting together the puja utensils for his morning prayers, serving him his medicines, asking the cooks to make the dishes he liked, overseeing his meals are sent to his office, etc.

So much so, Badaman also trusted me with the household safe – an area where many were not allowed to enter.

Untouchability in my own home:

Initially, I did not like the tea. Every morning, a pot of tea would arrive in my room – I, without a care for where the tea came from, or who made it, would consume it without a second thought. However, as the days passed, I started enjoying the ritual.

Similarly, in my maternal home, meals would be prepared by family members, and was an intimate affair with close family members. At the Singh household, meals had to be prepared for 40 – 50 people every day! For this purpose, we had cooks – that too Brahmins. It was believed that meals prepared by the hands of Brahmins would bless the members of the household.

Interestingly, our own family members were barred from entering the kitchen – if our hands were to touch the utensils, the cooks would not eat the meal, considering it impure. Furthermore, it was considered an omen if the Brahmin cooks weren’t fed, therefore no one would dare enter the kitchen.

I, during an occasion or two, would enter unknowingly, as the ritual was different to that at my maternal home. Seeing me enter, the cooks would tell me:

“You should not enter the kitchen like this. If you were to touch anything, we won’t be able to eat”.

Getting married to Singh, and settling in my new home

My political determination begins to grow