“When a political party presents its policies and agenda, be it in whichever sector – agriculture, education, health, labour etc, it usually refers to its manifesto as its principal document. Within a party, individual objective and experiences are secondary, and the party’s objectives primary. In our case, we were yet to draft the party’s objectives. In the early years, our objective had been to overthrow the Ranas and usher democracy in Nepal, and now that we had been successful in that endeavour – we were focusing our energies towards reform. Although our guiding principles were inspired from social democracy, we were yet to draft a document which would be our party philosophy.

Owing to lack of previous policies, there was a lot of homework to be done – while it took enormous amount of time, we did the work diligently. When we would suggest reforms such as modernization of agriculture, abolition of caste system – Rana ministers would not express any concern. However, when the issue of the Birta System was addressed, the ministers in the Rana cabinet would oppose the proposed reforms vehemently.

Their opposition could be understood – considering Ranas were the ones benefiting the most from the Birta System. Already bitter about their eroding political status, they were worried the reforms would also diminish their economic status”.

Ganesh Man Singh’s own family worry about the proposed reforms: 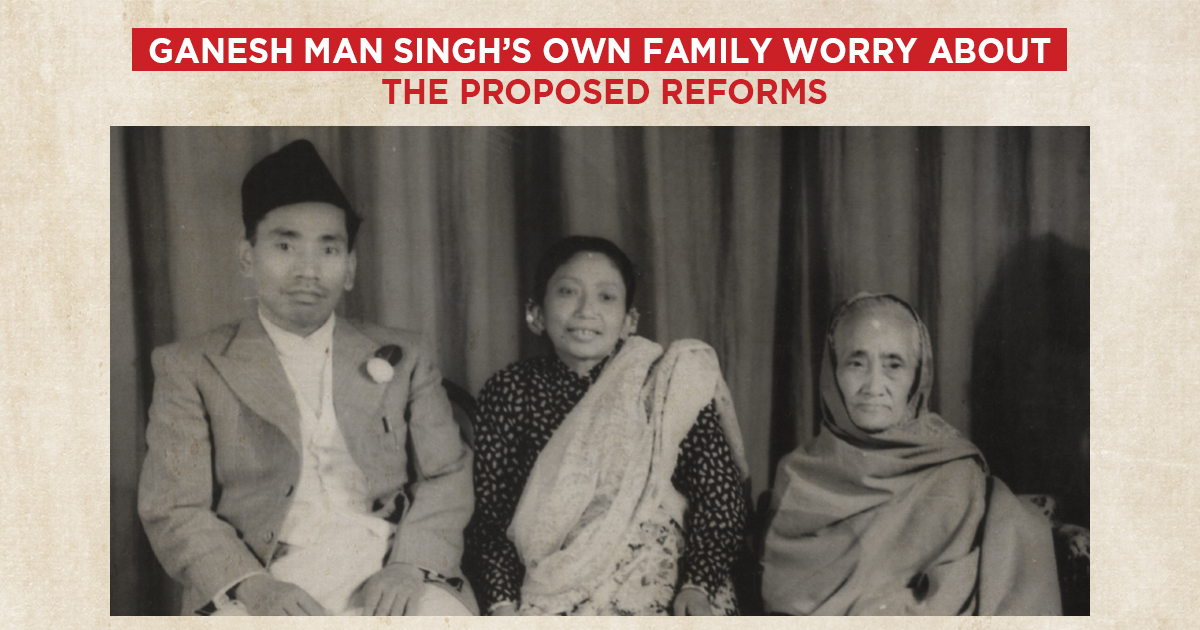 Surprisingly, according to Ganesh Man Singh, resistance to reform the Birta System was not only met by the Rana leaders – but also by other leaders of Nepali Congress.

A majority of Congress leaders were land-owners themselves – a class of people who had benefited from the Birta System over the years. They were worried the reform would allow confiscation of their lands.

“That was not what we were proposing – our reforms were aimed at introducing a fair taxation policy to landowners and ensuring the land tillers were treated fairly”, Singh explains.

At Singh’s own home, where family members used to rely on the harvest sent to them by the land tillers in their ancestral property in Janakpur, started worrying about the reforms.

“Rumours about Congress working towards land-confiscation had reached my home too. My grandmother and mother used to worry about their land, and wondered if their annual harvest would be taken away”, Singh said.

It was only after Subarna Shumsher – one of the biggest landowners within Nepali Congress proclaimed his endorsement of the proposed reforms, other leaders were convinced.

Meanwhile, communist leaders, who were convinced that Nepali Congress was only going to serve the interests of the wealthy – had begun communicating the same to the farmers.

Mohan Shumsher, B P Koirala and other ministers visit India:

Meanwhile, although Mohan Shumsher had vacated Singha Dubar and moved to his private residence, the question of his resignation was left dangling in the air. At the same, an invitation to visit India from the Indian government arrived for Prime Minister Mohan Shumsher, Home Minister B P Koirala, Finance Minister Subarna Shumsher, and Transport Minister Bhadrakali Mishra.

Within the official visit, Indian PM Jawaharlal Nehru tried to convince B P Koirala to work together with Rana leaders with Mohan Shumsher as Prime Minister. However, B P Koirala was insistent that Mohan Shumsher must resign. “At the same time, Indian media ran wide and proud stories of Mohan Shumsher, which did not help our case at all”, Singh said.

Speculations within Nepali public about the Indian government supporting the Rana rulers began to emerge, and leaders of Nepali Congress were divided. “Numerous intra-party arguments ensued”, Singh shared. “But we tried our best to not let it reflect on our work”.

“Our role as an interim government was to draft the new constitution, and to lay the groundwork for the general elections. We kept our focus on that”, Singh shared.