After the Congress-Rana government of 1951 AD was dissolved, it paved way for a new government, which required a name for the Prime Minister’s position to be recommended. A meeting of the Central Committee was called for, and Congress was divided over B P Koirala and Matrika Prasad Koirala.

Eventually, it was decided that Matrika Prasad Koirala would become the new Prime Minister, mostly owing to a letter from Nehru. In the letter, Nehru had written to King Tribhuvan that it would be difficult for India to work with Nepal if B P Koirala was to be made Prime Minister.

On the same day Matrika Prasad Koirala was appointed Prime Minister, I gave birth to Rita – our first-born. At the time Ganesh Man Singh was in Calcutta for his hydrocele surgery. Singh was also made minister for a second time. 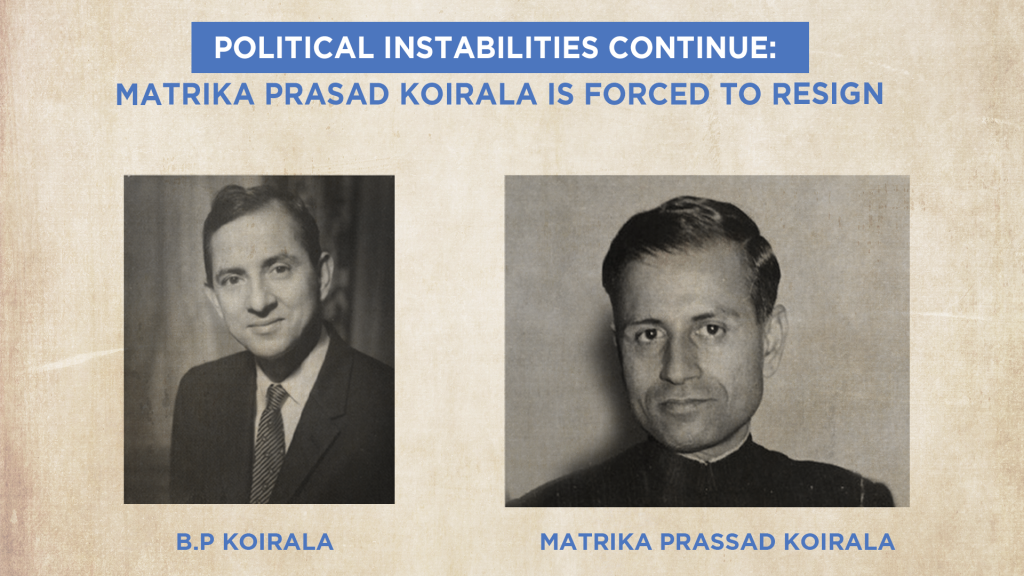 Following Rita’s birth, I had to take a temporary break from everyday politics. Therefore, much of Matrika’s first stint as Prime Minister, I was home. However, I would be constantly updated.

As Prime Minister of a Congress-majority cabinet, Matrika should have focused on ensuring timely general elections; however, he did not do so. Instead, his intentions showed he was more inclined towards the king.

Therefore, differences between B P Koirala and Matrika began to grow. Matrika Prasad Koirala, upon the advice of King Tribhuvan, took several decisions that were construed as pro-India. Similalry, public’’s trust in Nepali Congress began to erode.

Over unilateral decisions, and increasingly aligning with the king, Nepali Congress’s Central Committee arrived upon a decision to ask for a resignation from Matrika Prasad Koirala, Mahendra Bikram Shah, Mahabir Shumsher, and Naradmuni Thulung.

After losing his party membership, he could no longer remain Prime Minister, and he was forced to resign on 14th August, 1952. 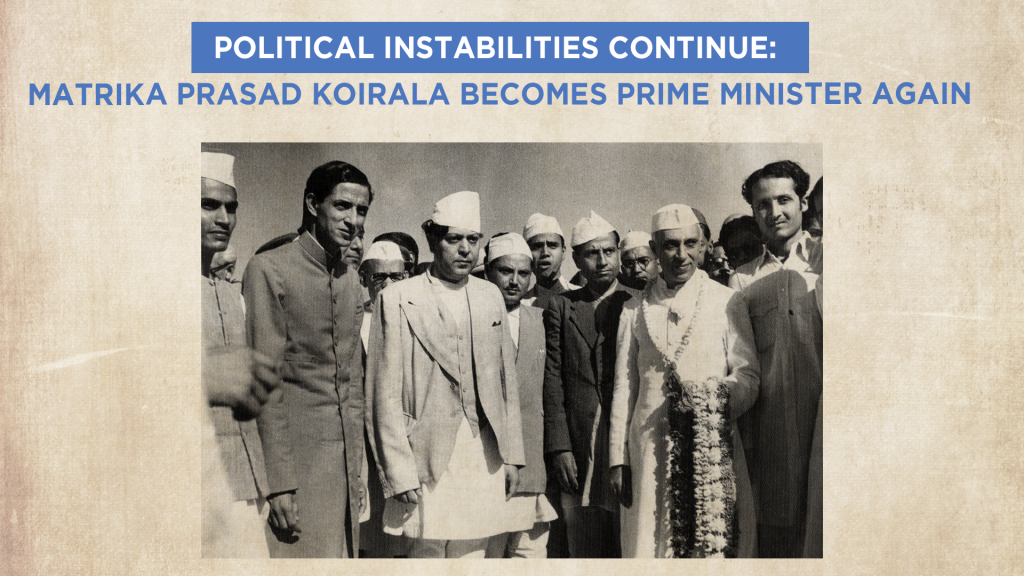 Nepali Congress believed Matrika Prasad’s resignation would pave way for a new government; however King Tribhuvan had other plans. “He took a regressive act of instating an advisory government which included the reactionaries”.

We protested against the king’s decision. Even the communist forces joined hands with us to protest this unconstitutional move.

In between the protests, King Tribhuvan went to India for an official visit. During his visit, he sought the advice of then Indian Prime Minister Jawaharlal Nehru, and then implemented the same after arriving home.