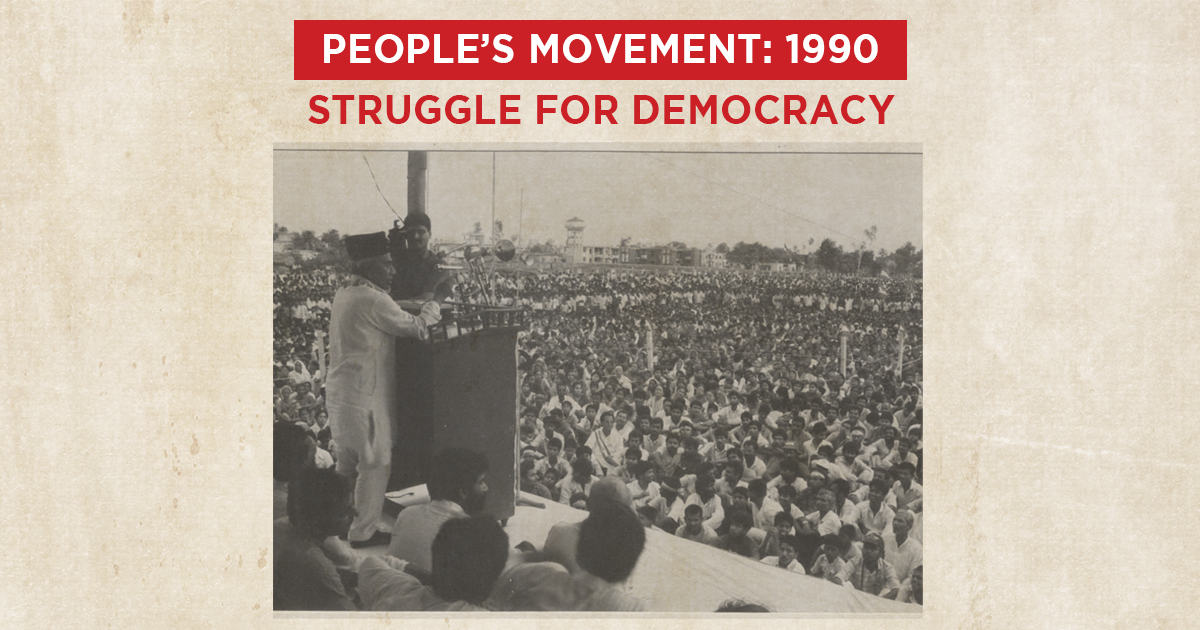 Ganesh Man Singh Foundation owes a note of gratitude to Ghanendra Purush Dhakal, author of ‘Loha Purush: Bisheleshanatmak Jivangatha (Iron Man: An analytical biography) for his permission to use his text as a source for Democracy Series. The following chapter, People’s Movement: 1990, Struggle for Democracy has been penned by Ghanendra Purush Dhakal, documenting and analyzing Ganesh Man Singh and the people of Nepal’s struggle for democracy in 1991 (translated).

Amongst the revolutions that have happened in the soil of Nepal for democracy, the 1990 People’s Movement is one of the first. The revolution was envisioned, architected, and led by Ganesh Man Singh – with the support of friends. This revolution holds a special place within Nepal’s narrative.

After King Mahendra introduced the partyless Panchayat System in 1960 AD, Ganesh Man Singh’s second struggle for democracy began. Singh, along with his political friends which included B P Koirala spent several years in jail at the Sundarijal Detention Centre without trial, several years in exile, and several years on the run. B P Koirala, sadly passed away before the end of the struggle, however Singh, continued efforts.

On the dawn of Nepal’s democracy, Singh was heard saying, “his 39 years of struggle have borne fruit. I might have had to go through several ordeals to arrive here, however, I now considered my debt to Martyr Gangalal and the people of Nepal paid”.

Interestingly, the 1991 Revolution was also unique from a political perspective – during this time, people forgot if they were representing Congress or Communists – they were united under one single cause – for democracy and ensuring human rights.

On 15th December, 1960 AD, then King Mahendra established a partyless Panchayat System under his direct rule. The incumbent ruling party, Nepali Congress was dissolved, and leaders including B P Koirala, Ganesh Man Singh, Krishna Prasad Bhattarai, and several others were jailed. They spent eight years in prison at the Sundari Jal Detention Centre awaiting trial. After several political pressures, they were released from detention in 1968 AD. After being released from jail, Singh, Koirala and other members of the party had to live in exile in India for the next eight years – there they continued the revolution, but without much effect.

During the time, the chief leaders of Nepali Congress were B P Koirala, Ganesh Man Singh and Subarna Shumsher respectively – however, most strategies were developed by B P Koirala.

Singh, who was insistent that the nation needed a national movement, would constantly share his opinion with Koirala and other party members. He was of the opinion that instead of these small movements from across the border, the party should work on collecting resources to launch a national movement from the soil of Nepal itself.

After a long struggle with deteriorating health compounded by living in exile and other struggles, B P Koirala passed away in 1982 – without being able to see Nepal’s democratic dawn. After Koirala’s demise, much of the party’s responsibilities were shouldered upon Ganesh Man Singh.

Singh, who was still convinced for the need of a national movement, began making plans for a nationwide Satyagraha (civil disobedience) movement in 1985. NC began their nationwide Satyagraha in May, 1985 AD, but had to call it off within a month after a series of bombings (1985 Nepal Bombings) by other exiled parties took place across the country, jostling the country into severe civil unrest. Singh, his family members, and their sacrifices