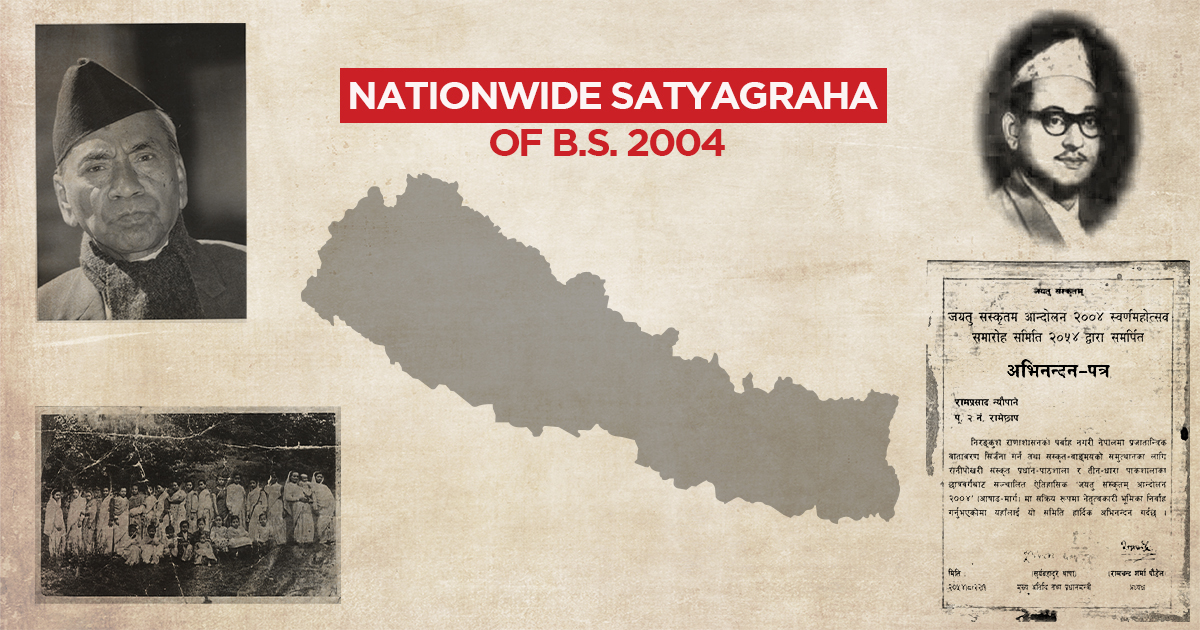 Following the arrests from Biratnagar, Rastriya Congress decided to issue a notice to the Rana government – if within one month the arrested leaders were not released, a nationwide Satyagraha would be launched. The ultimatum also asked the Rana Government to pave way for other political reforms.

The government did not pay heed, and in April, 1947, a nationwide Satyagraha was launched.

“Despite the challenges of communication during the time, the Satyagraha gained swift momentum”, Ganesh Man Singh would tell Mathbar Singh.

From Kathmandu to Janakpur, and Birgunj to Biratnagar, protesters poured in the streets chanting political slogans against the government. In Kathmandu, Bhaktapur, and Lalitpur, activists, including students demanding reform poured onto the streets. Nepal Women’s Association was formed, and participation of women leaders such as Mangala Devi Singh (wife of Ganesh Man Singh), Sahana Pradhan, Sadhana Pradhan, amongst others were at the forefront of the protests. A nationwide movement for political reform based on political consciousness had indeed begun. 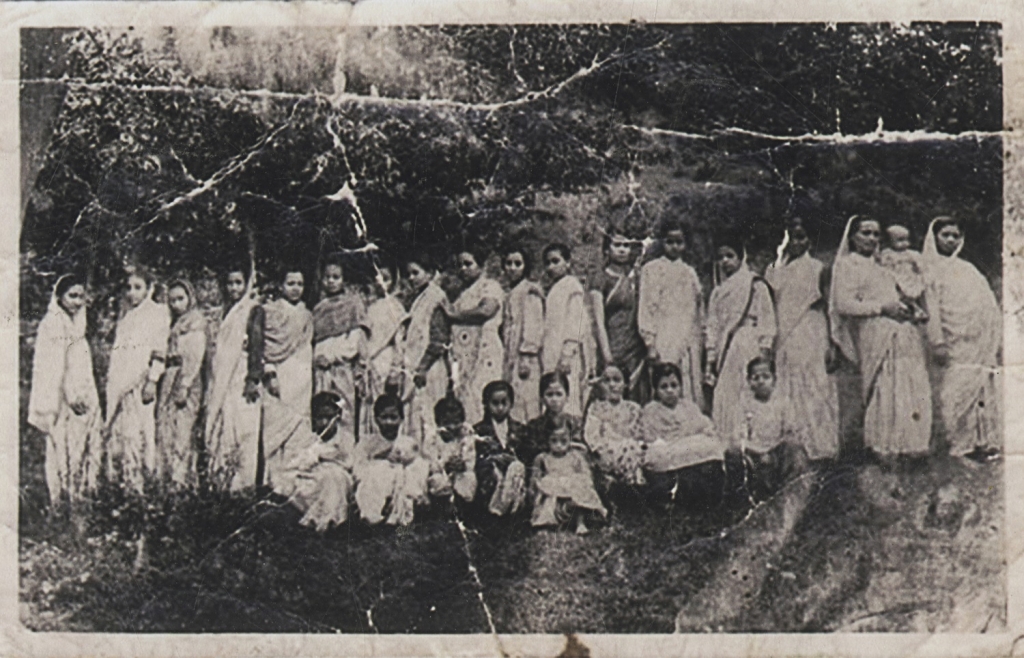 As protests intensified, Ranas clamped down upon the activists, and jailed thousands of protesters. A famed incident of the 1947 movement is Pushpalal, brother of martyr Gangalal launching himself in front of General Nara Shumsher, demanding to be shot. Nara Shumher had overseen the execution of the four martyrs, and had also flogged Ganesh Man Singh during his interrogation. Pushpa Lal would later be known as the father of communism in Nepal.

In India, Ganesh Man and other leaders were overseeing the Satyagraha movement. They were mobilizing other resources, and arranging meetings to give further direction to the movement. In Calcutta, Singh reached out to Bhetnarayan and Satyanarayan Bahadur Singh for financial assistance; however, they proposed starting a publication which would carry the message of the Nepali people instead. Thus, Nepal Today, a weekly paper began publishing from Calcutta.

Meanwhile, demonstrations inside Nepal, especially inside Kathmandu continued for days, until, in May, 1947, Padma Shumsher made a proclamation. 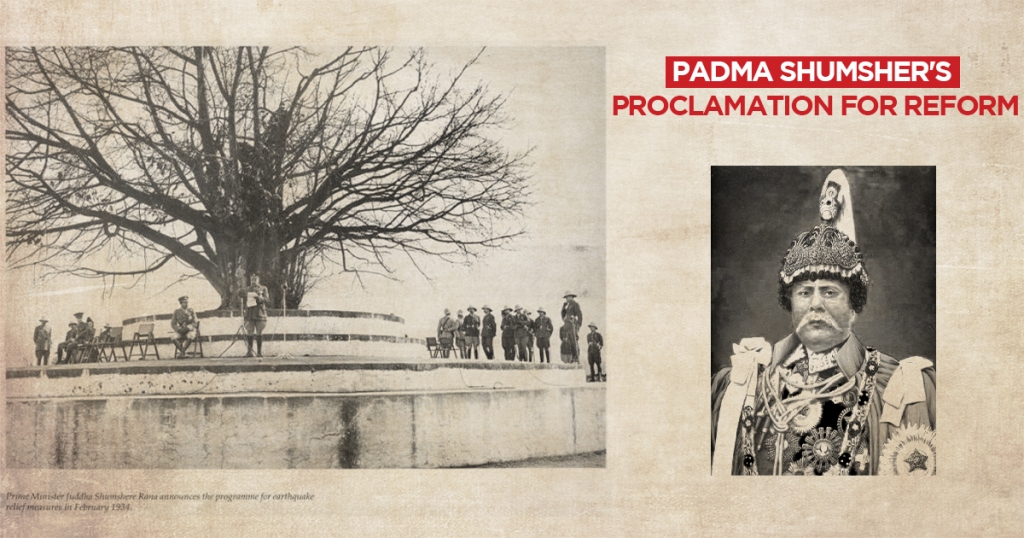 During the time, there used to be a large Khari Bot (Ficus Tree) tree at the centre of Tundikhel. Known as Chakala Sima, the tree was used by heads of state to make official proclamations (as seen in image (L), ‘Juddha Shumsher Rana is announcing earthquake relief measures in February, 1934).

Similarly, in May, 1947, Prime Minister of Nepal Padma Shumsher Junga Bahadur Rana stood atop the circular platform and made a proclamation to the people of Nepal that political reforms would be made. Padma Shumsher, assuring the protesters said Nepal would be administrated in conformity to a Constitution, and constitutional experts would arrive soon. He also promised other reforms, including provisions for girls to be enrolled in schools, and municipality elections. While his administration conducted local level elections and enrolled 500 girls in a formal school, his other proclamations pertaining to political reform were widely ignored.

“In fact Padma Shumsher’s reform Proclamation was vague – it did not stipulate specific objectives, how they were to be achieved, and most importantly did not specify deadlines”, Ganesh Man Singh said.

“However, because it was important first step, we decided to give Padma Shumsher an opportunity for reform”.

Nepali Congress therefore decided to suspend its Satyagraha. Matrika Prasad Koirala, who was serving as the Acting Chairman of Rastriya Congress in the absence of B P Koirala requested to be relieved off his duties, and Dr. Dillliram Regmi was nominated the next Acting Chairman.

“However, that did not materialize as Mohan Shumsher and Babar Shumsher, sons of Chandra Shumsher were against political reform in Nepal”, Ganesh Man Singh tells Mathbar Singh.

Nevertheless, the 1947 Satyagraha did instill a certain degree of political consciousness within the citizens of Nepal. It also established Rastriya Congress as a formidable organisation and gained the attention of other nations. 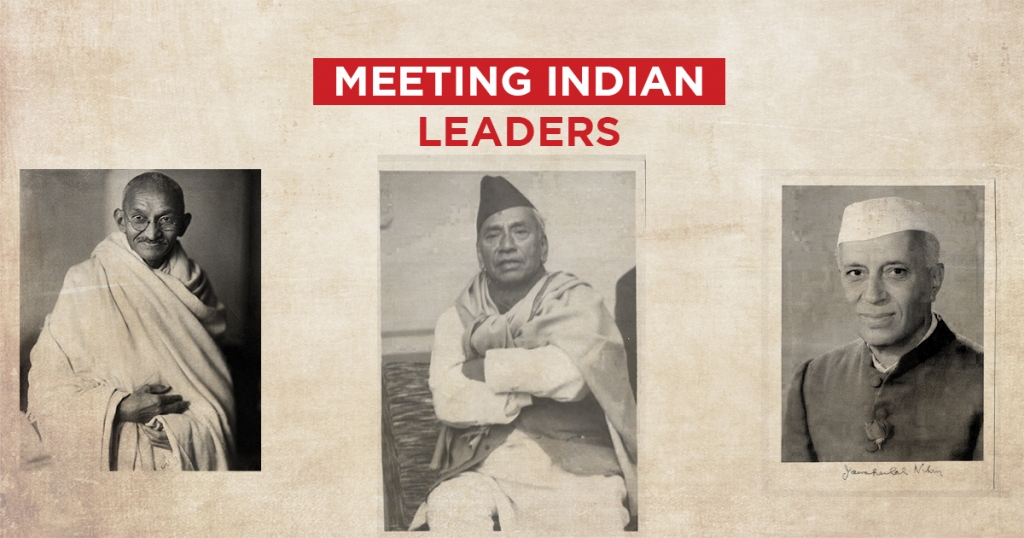 India, at the time was readying its transition from British India towards a sovereign nation; Nehru was the Prime Minister of the Interim Government of India. Interestingly, Nehru had also requested the Rastriya Congress to suspend its Satyagraha. Therefore, it was decided Ganesh Man Singh and Matrika Prasad Koirala would meet Jawaharlal Nehru. Singh would meet him as Krishna Bahadur Pradhan as he was still wanted by Nepali authorities.

Therefore, Koirala and Singh reached Teen Murti Bhavan in Delhi.  The trio had a very productive discussion about Nepal, with Nehru showing particular interest in the 1941 movement of Nepal. Koirala also asks the reason for Nehru’s request to suspend their Satyagraha; to which Nehru tells Singh and Koirala that ‘the Proclamation is an important first step and that Padma Shumsher should be given an opportunity for reform’.

“But they aren’t doing anything concrete to follow up on their promised reform”, Singh insists, to which Nehru explains that ‘civil rights is a complex subject, and Ranas have little to no knowledge over the matter’.

“Such things take time, and my advice still remains that you suspend your movement”, Nehru shares.

Koirala and Singh, a little convinced, thank Nehru for his time, and take leave. “He came right up to the door, and waited until we got into the car”, Singh shares a trait about Nehru.

In the meantime, B P Koirala who suffered from cancer had fallen seriously ill. He was in need of medical attention, and needed to be released from jail for the same. Therefore, Rastriya Congress decided to reach out to Mahatma Gandhi. Gandhi was in Calcutta at the time, and it was decided Ganesh Man Singh and Krishna Prasad Bhattarai would go to meet him, and request for the release of B P Koirala.

Their meeting with Gandhi is brief, and Gandhi lends a sympathetic ear to the plight of Nepalis. He also asks Bhattarai and Singh to come visit him the next day to collect a letter requesting the release of B P Koirala. At the same time, he turns to his secretary and tells him to wire Nepal government that Krishna Prasad Bhattarai will be arriving in Kathmandu with his letter.

The next day, Kishunji (Bhattarai) and Singh go back to visit Gandhi. Upon seeing them, Gandhi, who has forgotten to write the letter asks them to wait for 10 minutes, and requests for a pen and paper from his aide. However, the letter is not required.

“We received word that Koirala was released yesterday Bapu”, Singh tells Gandhi. “The Rana government released him upon receiving your wire”. 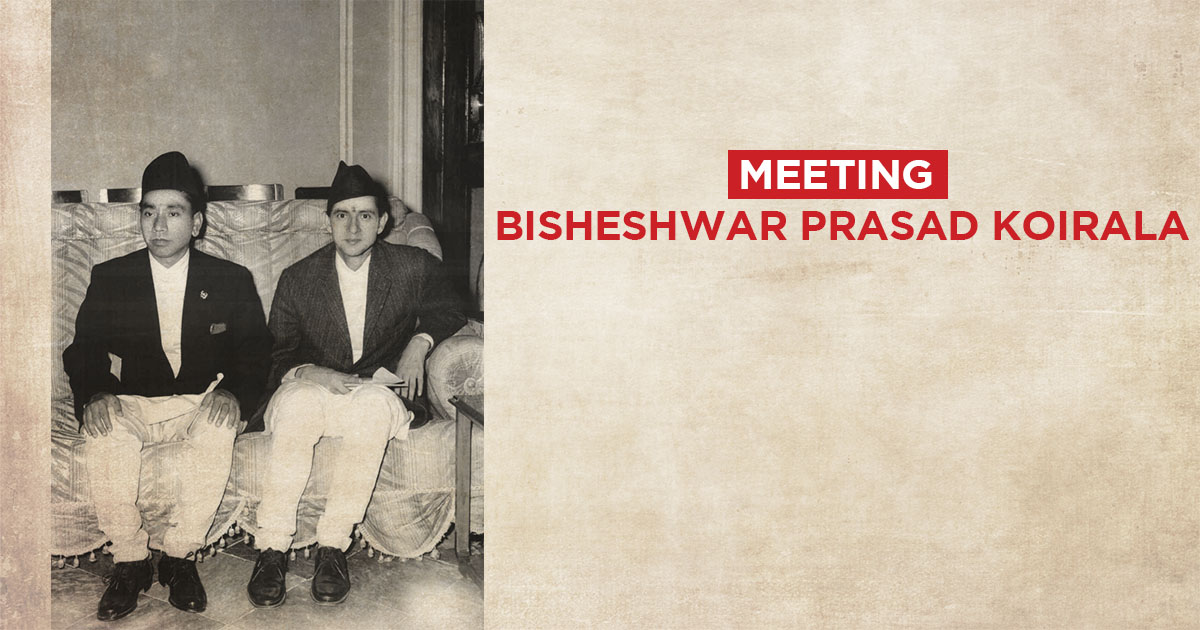 Meeting B. P. Koirala, formation of Rastriya Congress and the Jute Mill Strike 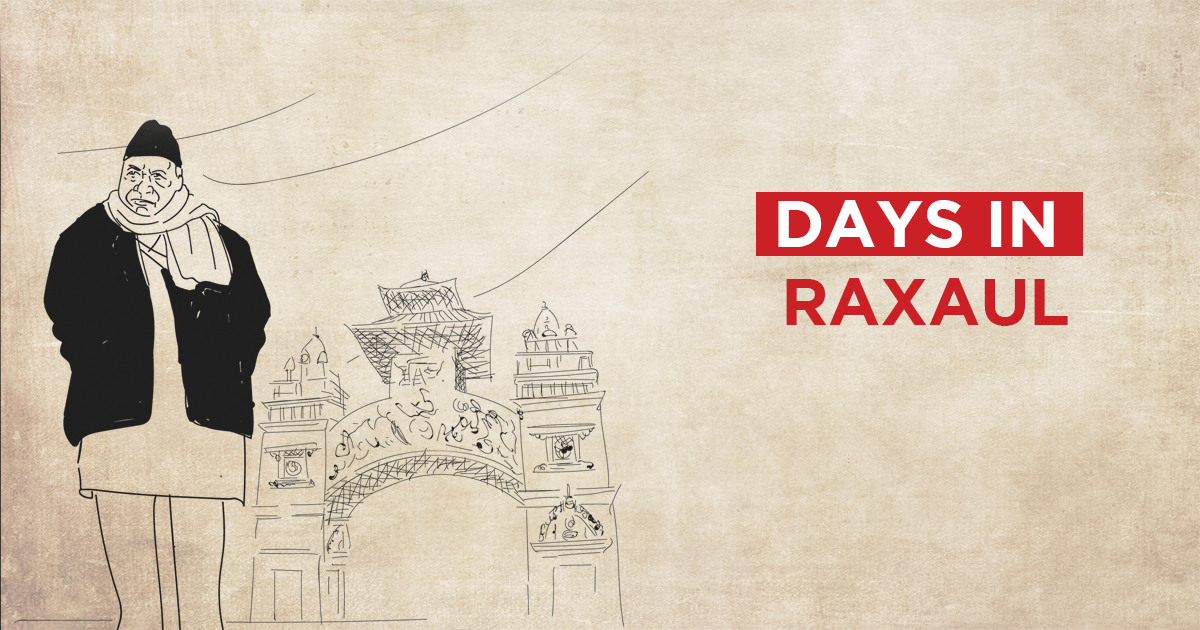