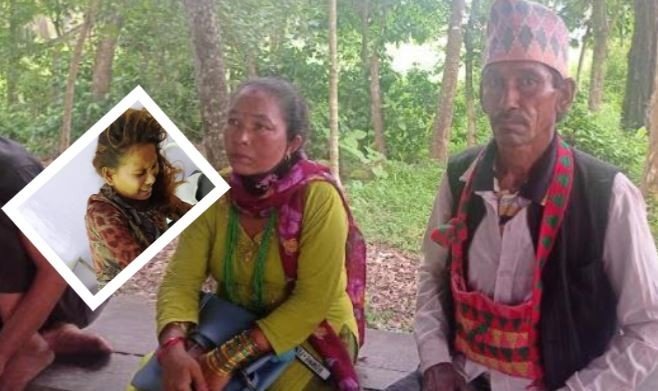 For the last 15 days, Dukadevi Darji Tamang of Chisang settlement in Kanepokhari Ward No 5, Morang, has been undergoing treatment at the Intensive Care Unit of Dharan-based BP Koirala Institute of Health Sciences.

On May 14, Tamang’s neighbors mercilessly beat her to a pulp accusing her of stealing a sim card. The abuse affected Tamang’s mental health, rendering her mentally ill.

“She would often lose control of herself – throwing her arms and legs in a sudden outburst of uncontrollable anger,” said Tamang’s father Harka Bahadur Darji. Following which, Tamang’s father’s side of the family decided to tie her up to keep her mental fits in control.

Fearing that his daughter was possessed by evil spirits, Darji even sought cures from the village’s witch doctors. For want of psychiatric consultancy, Tamang’s health continued to further deteriorate.

That was when the Ward chairman of Kanepokahri-5, Charan Gurung, took the initiative to send her to the Dharan-based hospital. “Given the family’s poor financial condition, I provided them with Rs 15,000 for the initial treatment,” said Gurung.

During the course of medication, Tamang, who was three months pregnant at that time, suffered a miscarriage.

“My daughter Dukadevi is married to Kumar Tamang, who is also a local here. The two of them have an eight-year-old daughter. But she has been living with us for some time now,” said her father.

During the two-week stay at the hospital’s ICU, Darji said he had already spent over Rs 250,000 for his daughter’s treatment. “I am not sure for how long we can afford it,” he lamented.

With the help of Dalit rights activists, Darji had somehow managed to lodge a complaint against the neighbors. However, the district court dismissed the case and released the perpetrators on bail of Rs 25,000.

“Both the court and the police failed to provide justice to impoverished Tamang and her family. This is just one among several other cases where Dalits — the Darji family in this case — have been treated unjustly. For how long should we keep facing such atrocious acts of hate and discrimination?” wondered Dalit rights activist Tilak Bardewa.

On Friday, Tamang’s family registered another case against the three neighbors under offenses against pregnancy protection. The neighbors, however, have refuted all the charges against them.

According to Pushpa Magar, Dukadevi was drunk when they had a verbal argument on May 14. “Dukadevi was drunk and had been hurling expletives at us, which resulted in a mild argument. There wasn’t any violence involved. More than one month since Dukadevi’s deteriorating mental state, her family was oddly quiet. They have spoken about it only now. That’s suspicious.”

Meanwhile, a man killed his sister-in-law over a family dispute in Mahagadhimai Municipality of Bara district on Friday. Singhasan  Paswan beat his sister-in-law Maina Devi Paswan, 35, to death at around 9:00 pm on Friday. She was rushed to the hospital but died while undergoing treatment. Bara District Police is searching for Singhasan, who is on the run after the incident. Maina Devi is survived by her husband, who works in Kathmandu, two sons and a daughter.