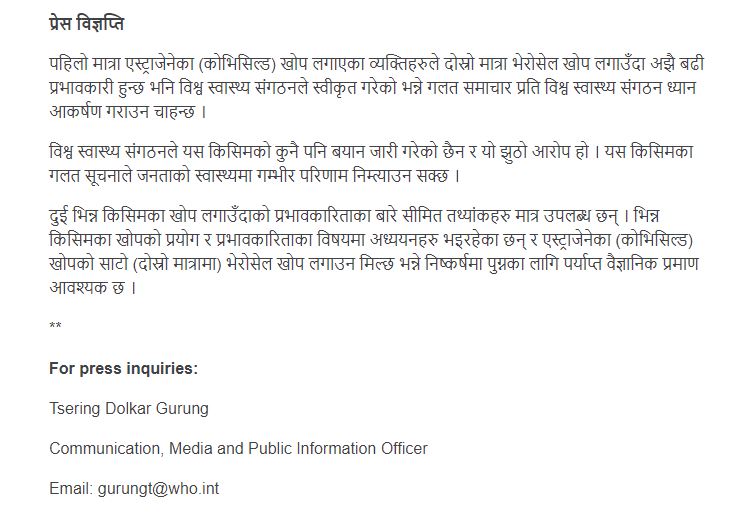 The World Health Organization (WHO) has refuted the claims that mixing the vaccination of Vero Cell and CoviShield vaccines would yield more effective results.

WHO, Nepal clarified that it has not issued any such statements and such remark is totally baseless.

“WHO Nepal wishes to refute incorrect claims that the World Health Organization (WHO) has approved of a ‘mix and match’ regimen for Vero Cell and AstraZeneca Covishield vaccine citing more effective results,” the organisation said, issuing a press release on Wednesday.

The public health body also warned that such kind of misinformation can lead to grave consequences for the public and their health safety.

Several medical studies are under way to understand if switching COVID vaccines for second doses could boost immunity. No conclusion has been reached yet.

One small UK study into using different COVID vaccines in two-dose inoculations found that people who received Pfizer’s vaccine followed by a dose of AstraZeneca, or vice versa, were more likely to report mild or moderate common post-vaccination symptoms than if they received two doses of the same type.

Canada, which is facing supply shortages, has recommended that the Pfizer and Moderna vaccines can be used interchangeably.