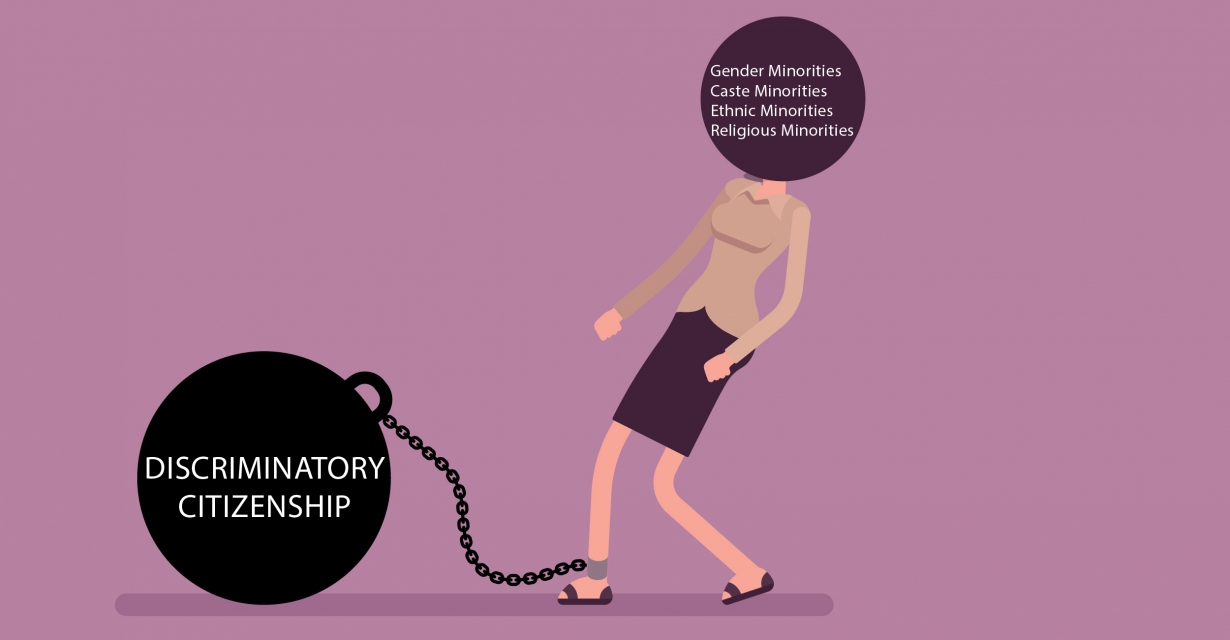 If you were asked what makes someone Nepali, how would you answer? Is someone Nepali only when both their parents are Nepali, irrespective of where they were born and raised, whether or not they speak Nepali or any languages spoken within Nepal?

What makes a foreign woman married to a Nepali man and seeking to make a home in Nepal more Nepali than a foreign man in the same circumstances? Are there different degrees of Nepaliness, where someone is more Nepali than another and has greater claim to that identity?

Most of all, who gets to decide on the Nepaliness of a person?

The Mahendra Government did when it released the Citizenship Act 1964, the first Act to introduce citizenship cards as proof of Nepali citizenship. This Act was not written by a democratic representative government and was instead an instrument to push then king Mahendra’s Hindu-centric and patriarchal vision of a Nepali society: of a Nepali-speaking Khas man clad in daura suruwal, with a Nepali-speaking Khas woman in gunyo cholo beside him.

It introduced categories of citizenships – natural and naturalized – which in itself is not a point of contention here, as such categories exist in other countries around the world. It is more important to evaluate how it was decided which category a citizen belonged to.

The 1964 Act said, simply, if your father is Nepali then you are Nepali by descent, a natural citizen. It also said that if you are a child found in Nepal but whose parents are unknown you will be deemed a Nepali citizen by descent; however if your father’s whereabouts are eventually known and he is learned to not be Nepali, your citizenship will be revoked.

Despite the post-monarchy government’s declaration that it will now usher in a secular state that treats all its citizens justly and equally, the laws it passed and continues to pass say otherwise.

In today’s Nepal, there are several categories of citizens with different levels of claim to the Nepali identity – some categories visible and blatantly present in the constitution, others more invisible.

During the 30 years of Panchayat rule from 1960 to 1990, the Mahendra Government had rigorously enforced a large-scale homogenization campaign in which the Nepali identity was reshaped and enforced as Hindu, Khas, and only Nepali-speaking.

Our present continues to be informed by this. Local administrative officials, who are more often than not Bahun/Chhetri men, are stationed as gatekeepers of the Nepali identity and get to decide upon the Nepaliness of the people who go to them for what is their right.

In places like Kailali and Dhangadi, Muslim men and women are still denied citizenship for no other reason but the xenophobic suspicion of the local administrator. Children of single mothers – and their mothers – are often harassed and slut-shamed when they try to seek citizenship in their mothers’ names.

Transgender people still have to deal with the administrator’s transphobia to get their citizenships, which itself refuses to acknowledge the gender they identify with; instead they are forced to mark themselves as ‘third gender’. However, some gender queer or gender non-conforming people may indeed identify as ‘third gender’.

We have read enough news stories of marginalized groups being refused their citizenship to know that it is not an exception, but a systemic wrong. Sometimes we hear the story end with triumph: the person seeking the citizenship certificate will go to court, and after a long legal battle often lasting years, will finally receive a citizenship certificate.

But there is rarely ever a mention of what consequence the xenophobic, transphobic, and/or sexist administrator faced. Does he continue to work as the decider of someone’s Nepaliness, still informed by his racist, sexist outlook?

The Constitution of Nepal 2072 states that all citizens must be equal before law, and that any law inconsistent with the fundamental laws spelled out in the constitution is void. By this, the Citizenship Act in its entirety must be void.

Even if the Citizenship Act is scrapped entirely and rewritten, which it should be given that it still carries vestiges of the Panchayat era, will it be enforced in the same spirit in Jajarkot, Ilam, Kailali, and across the nation?

Last Saturday, when the Secretariat meeting sat down to decide on who can become Nepali and under what circumstances, the room did not have a single woman. It did not have a single Muslim, Dalit, Buddhist, any one in fact who deviates from what Mahendra’s government had envisioned for Nepal: a Hindu only, Khas patriarchal society.