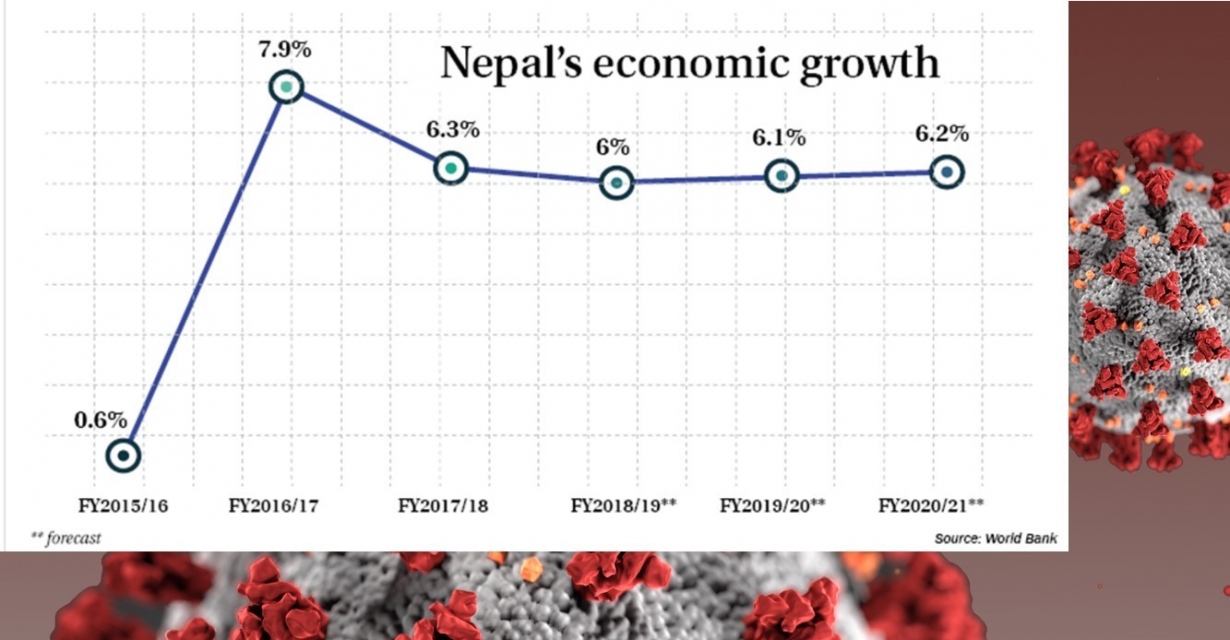 What Covid-19 could mean for a small economy like Nepal?
Read Time: 4 minutes

According to United Nations Conference on Trade and Development (UNCTAD), the cost of Covid-19 to the global economy is estimated to be more than $ 1 trillion. This widely spreading contagious disease which has wreaked havoc is certain to push down the global economy, mainly through supply chain disruptions. The question is “What Covid-19 could mean for a small economy like Nepal?”

Nepal is a country with an economy of roughly around $30 billion and the impact of Covid-19 on national economy can be seen through various grounds.

India being the largest import partner of Nepal, with around 60% of the total import, is facing disruption on production, whose repercussion will be seen on Nepali economy. India’s import dependency on China is also huge with the total import of electronics, pharmaceutical ingredients and organic chemicals accounting to 45%, 40% and 70%, respectively.

With the outbreak of Covid-19, the value of dollar has risen against Indian Rupees (INR), which makes Nepali Currency weaker as compared to INR.

Nepal, being a consumption-based import-oriented country, is supposed to be hit hard by the rising value of dollar. The price of import of goods and services escalates which not only creates an inflationary pressure but also is supposed to widen the current account deficit.

Given this scenario of Nepal’s dependency on imports from India and China along with the rising value of dollar, it will have a significant impact in Nepali economy.

With fear of widespread Covid-19 around the world, Qatar government temporarily banned flights from 14 countries, Nepal being the one of them. Remittance from workers abroad, a pillar of Nepali economy, accounts for 24.25 percent of the national GDP and Qatar is Nepalis’ one of the top three destination choices for foreign employment.

The number of Covid-19 cases is increasing in Gulf countries, which will affect economic activities, making Nepali workers vulnerable to job cuts if the contagion of the virus is prolonged. With an already declining number of workers going abroad for employment and the possibility of job cuts, the virus will create an additional impact on remittance.

Apart from trade and remittance, another area hit hard by the coronavirus is tourism industry. Nepal Government’s plan of promoting tourism sector through the Visit Nepal 2020 campaign had to be called off shortly after it was inaugurated. Airlines and hotels are suffering massive losses with national and international travel restrictions enforced to contain the spread of the virus. Empty flights and hotel rooms have made it difficult for business owners to meet operating expenses.

Nepal’s manufacturing and construction companies are no exception and are greatly affected by the adversities invited by global supply chain disruption. Scarcity of raw materials will not only cut down production but will also result in inflationary price of finished goods along with lack of employment opportunities.

In today’s integrated world, not a single country can remain unaffected with any sort of global event. With such a huge pandemic outbreak, Nepal will not be spared of the effects that Covid-19 will bring to the global economy. Though the intensity of Covid-19’s impact on Nepal’s economy can’t be estimated this early, the impact will get bigger if the situation is prolonged.