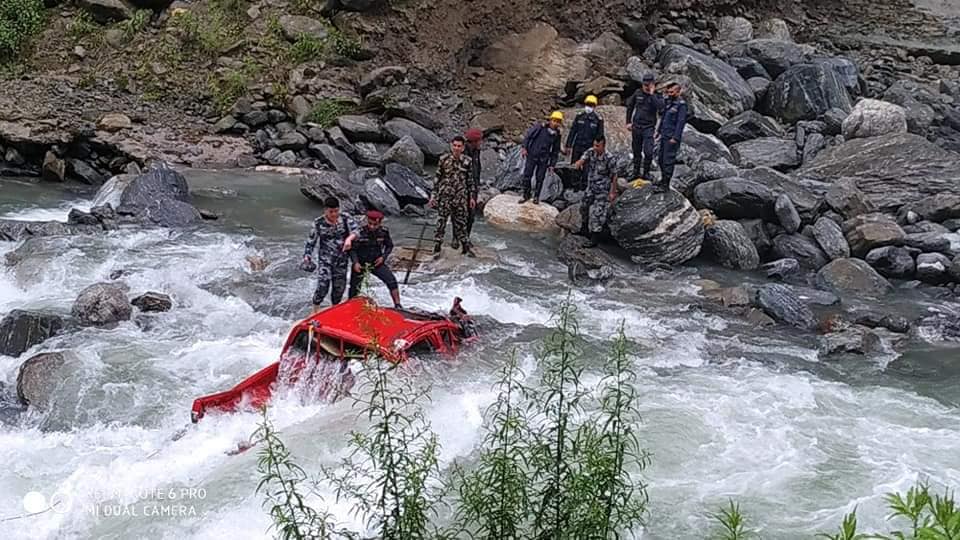 An engineer and a driver working for Melamchi Drinking Water Project (MDWP) have gone missing after the gate of the audit tunnel at Aambathan gave burst due to the water pressure inside the tunnel yesterday.

The duo was swept away along with the vehicle after the tunnel burst out.

The missing persons have been identified as Engineer Satish Goit of Dhanusha district from the contracting company Sinohydro and driver Radha Krishna Thapa of Godavari in Lalitpur.

Though two others — Engineer Shekhar Khanal of MDWP and consultant Pemba Lama — were also in the vehicle when the incident occurred, they were rescued by locals.

According to Mayor of Melamchi Rural Municipality Nima Gyalzen Sherpa, the water that gushed out of the audit tunnel was no less than a devastating flood.

The vehicle was found in a ruined state down the stream outside the audit tunnel while search for the missing duo is still underway.

Rajendra Prasad Pant, information officer of the project, attributed the incident to a ‘technical error’.

In mid-March, MDWP had conducted a water inflow test along a limited route of the tunnel from the Melamchi River to the Aambathan tunnel. The inflow test was conducted in the presence of Drinking Water Minister Bina Magar.

Magar, at that time, had vowed to speed up the project with the aim of completing it by the end of the current fiscal year, which ends in a couple of days.