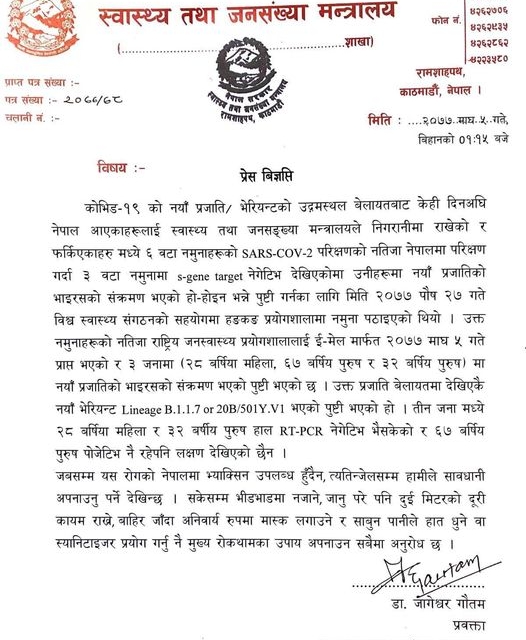 The UK variant (B-117) of corona virus has been confirmed in three people who had recently entered Nepal from the UK.

The Ministry of Health and Population said in a statement on Monday that the new corona variant had been confirmed in three UK arrivals.

According to the Ministry, those who had arrived in Nepal from the UK a few days ago were kpet under surveillance and three of the six samples from those people tested positive for the new COVID variant.

The Ministry informed that the new type of corona has been confirmed in a 28-year-old woman, 67-year-old man and 32-year-old man.

Of the three, the 28-year-old woman and 32-year-old man have already tested negative in their second PCR test, meaning they have recoverd, while the 67-year-old man is still positive, according to the Ministry.

The swab samples collected from the UK returnees a few days ago were sent for test at the National Public Health Laboratory (NPHL) and three samples showed signs of a genetic mutation in the UK.

The samples were sent to a Hong Kong laboratory for further testing with the help of the World Health Organization (WHO).

A report sent by the Hong Kong Laboratory to NPHL via email on Monday confirmed the new corona variant seen in the UK, the Ministry said.

Experts say the B-117 variant is over 71 percent more contagious than other genetically modified corona viruses.

Studies have shown that people with this infection carry a much higher viral load than normal coronavirus infections.

Compared to other corona viruses, more studies are being conducted on the effects of B-117. The World Health Organization (WHO) says that the new variant has not escalated the death toll.

Studies are also being done to see if the vaccines currently in use work against B-117. According to Corona Tracker at Johns Hopkins University, the virus has spread to about three dozen countries around the world.