Fresh rage inundates social media (SM) platforms whenever cases of bullying, rape or murder are reported. People feverishly share their opinions on their SM with trending hashtags such as ‘#Justicefor…’ and in cases of rape ‘Hang the rapist(s)’ along with some inspiring quotes.

Eventually, the rage fades away within days or in some cases weeks. The cycle takes a break while waiting for another similar incident to be reported. To get the cycle wheeling, it is important to self-check where we have reached with the short-lived energy and rage.

The SM rage after the video of two boys on a motorcycle harassing Nikisha Shrestha, an aspiring model, went viral last week has gradually started to fade. In the video, the perpetrators are seen following Nikisha and harassing her.

Nikisha is not new to harassment, but this time it was different for two reasons – for once this was a case of people sharing a video of her being harassed offline (physical) instead of the regular virtual bullying she faces with hate comments on her posts and her videos being turned into meme contents, and secondly the incident finally triggered Nepali woke and privileged class to call out the blatant harassment against a sexual minority.

One truth, however, remains that the video managed to yet again garner attention towards how sexual and gender minorities are forced to live amid acute lack of fundamental constitutional right to choice, right to freedom, and the right to live with dignity.

Following increasing concerns across social media and pressure on Nepal Police, the police headquarters ordered its Cyber Bureau to investigate into the case who then ordered Bhaktapur police to take action against the alleged perpetrators.

According to the Bhaktapur Metropolitan Police Range, Safil Khatri, 19 and two other boys aged 16 and 17 from Bhaktapur-5, Taumadhi, have been arrested.

“Our preliminary investigation shows that Khatri was riding the motorcycle while the 16-year-old was recording the video, which was later uploaded through the social media of the 17-year-old boy,” said Deputy Superintendent of Police (DSP) Dipak Giri, spokesperson for Metropolitan Police Range, Bhaktapur.

“We have obtained seven-day remand order from court against the arrested teens on the charge of indecent behaviour and investigation into the case is underway,” informed DSP Giri.

Though the alleged perpetrators are arrested, the president of Blue Diamond Society (BDS), Pinky Gurung, doubts that harassments and violence against the LGBTQIA+ community will not occur again.

Pinky said that BDS has been helping Nikisha by filing a police complaint and providing moral support, however they believe that Nikisha has to fight most of the legal battle on her own.

“BDS provides support to our community (LGBTQIA+) members, teaches them to defend themselves, and stand up against their harassers or tormentors rather than babysitting them as queer people face discrimination and bullying in every step of their lives. I, myself, still am subjected to discrimination sometimes despite openly embracing my sexuality for more than 15 years now,” said Pinky who is also a trans woman besides being an LGBTQIA+ rights activist.

Pinky also highlighted the society’s hypocrisy in trying to embrace ‘passable’ trans persons in the name of tolerance, acceptance, and inclusion.

Pinky said that Nikisha was already renowned via her TikTok videos and so people showed interest in her case, but there are several other queer people who continue to face online bullying and harassment on a daily basis as their ordeal go unnoticed.

Pinky also feels concerned about the mentality of younger generations and our education system as one of the three involved is a minor and all of them teenagers. (The Nepal Citizenship Act (1963) considers a person below 16 years of age to be a minor.)

The Blue Diamond Society, on Friday, organised a silent protest at Basantapur Durbar Square to mark the Transgender Day of Remembrance, where they remembered the members of their community who faced violence and harassment. They also demanded action against the ones harassing Nikisha Shrestha with change in mentality.

Similarly, Parakram SJB Rana, an openly gay fashion vlogger who avidly tries to educate his followers on gender and sexuality spectrum through his platform, said that it was quite upsetting to see people being bashed just because of their sexuality.

“Online bullying is quite rampant these days and Nikisha has been bullied for quite a long time. The video disturbed me very much. However, I believe that I did go overboard while addressing the situation due to anger and rage. Since one of three alleged perpetrators is a minor, it was quite wrong of me to dox them out for which I apologize. It was all out of love and concern for my community,” said Rana.

Rana, who was one of the first responders to Nikisha’s viral video, believes that the main focus should be on systematic change rather than capital punishment if one is to hope for an equitable society.

P.S. refer to the images below (retrived via Reddit) for a sneak peek on how Nepalis have a long road to travel in order to achieve gender equity while homophobic bigots thrive in closed spaces. 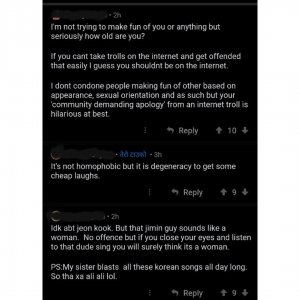 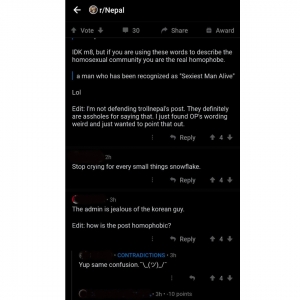