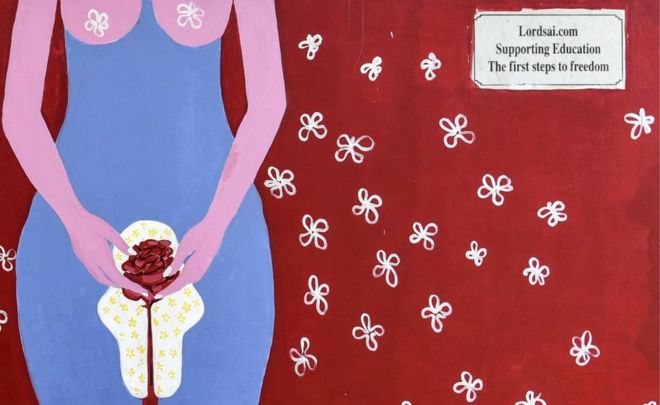 When I was around twelve years old, I saw blood in the toilet while relieving myself. The sight of blood scared me. I immediately ran to my mother, who was entertaining guests in the living room at that time, and I told her distraught that I was bleeding down there. My mother’s face suddenly turned bright red. She quickly got up, grabbed me roughly by my arm, and dragged me back into the toilet.

“Why are you running out announcing it like this in front of guests?” she hissed in anger. I was terrified by her response. She held my arm painfully tight and her eyes were filled with fury that I could not understand. Later on, we found out that I had stomach worms.

A girl in my fifth grade did not come to school for ten days. Other girls whispered amongst one another that she had had her period. There was fear and awe in those whispers, questions they could only dare ask in hushed voices. Some girls with older sisters had the answers.

“If she touches a boy, she will now get pregnant,” one girl said. “She is now not a kumari so she cannot play with us like before,” another said. “She cannot be touched now,” said yet another. “She has become ‘“nachhune”, untouchable”.

At that time, I was vaguely aware of menstruation’s connection with a woman’s reproductivity, but that connection made this even dirtier for me. All girls become “nachhune” when they grow old enough, the girls said. But every girl wished it would not happen to her. I remember the dread I felt when I heard these things. When that girl who had her period returned to school, I was amazed to see she hadn’t changed at all.

So, when I had my first period years later, I was old enough to know what this was. This time, the sight of blood filled me with incredible shame, and I tried to hide it from my mother and everybody else in the family. I stole sanitary napkins from her cupboard in secret. My mother discovered this in a few days; but she did not get angry. She sat with me and explained to me that it was a natural process and I should have come to her.

During that conversation, I could not look up and meet her eyes. I hated myself; I wished the floor would open up and swallow me. In my family, the restrictions were less severe than it was in most of my friends’ families. We were allowed to enter the kitchen, cook, touch our male family members, but we weren’t allowed to enter the puja room.

My mother told me I should not enter temples and places of worship during my period; otherwise the gods would be angry. She also told me to take care to hide it from my father and brother. I hated myself then.

I did not want to be impure, I did not want to be seen as impure. I hated my female body for making me this way. I should have been angry at the rules that say I am polluted when I am on my period but instead, I accepted that I was polluted and directed that anger inside me.

There is no rational reason behind the association of impurity with periods in women. Every year, Hindu women across the country fast and pray to the Saptarishis on Rishi Panchami to wash away the sins they accumulate while on their periods. But what is sinful about having periods?

Rarely do women and girls ask this question. Even when they do, they don’t get a real answer. Instead, associations are made with mobility during a woman’s period and disease and ill-fortune in the family. Rumours and stories are shared as evidence. If you think about this hard enough, it seems incredulous that something so ridiculous would become so widely accepted as fact.

And yet, period shame has become part of a general shame of the female body and female sexuality that is taught to little girls in Nepal as they grow into womanhood. While mothers play a major role in passing on the shame they themselves carry to their daughters, the society at large also reinforces this shame.

This shame towards our bodies lends strength to the powerlessness we also internalize. Women are taught to hate the bodies we inhabit, and to blame our bodies for the abuse we experience. We grow up acutely aware not only of how we see ourselves, but how others see us and it in turn affects how we respond to them. In the face of violence, we learn to bow down and take it. In the face of injustice done to us, we learn to accept there is nothing to be done.

It took me a really, really long time to shed some of the shame I felt for my body; I had to actively work to do so. In my late teens I began questioning this idea of period impurity and resolved to not let it take hold of me. I decided to go inside the puja room in my parent’s home while I was on my period.

I made sure no one was around, stood teetering at the door for a while, staring at the idols of Buddha, Manjushree, and Bodhisattva who stared back at me. I took a quick step inside and immediately jumped out, my heart thumping the entire time. For the next few days, I waited with anxiety for a sign of the gods’ displeasure. Nothing happened.

So, I went into the puja room again while on my period. Slowly I gained the confidence to walk up to the statues. Soon, I was able to stay in the room for a short period of time without my heart racing. Finally, I mustered the confidence to enter temples and Gumbas.

But this is only the first step of my possibly life-long struggle against shame. Despite knowing better, often I become ashamed of things I should not. I become uncertain about myself. Human emotions aren’t rational.

Shame and powerlessness aren’t taught to us in linear, rational terms, and so it cannot be rectified simply by linear, rational thoughts. It requires a healing of the emotional trauma inflicted when little girls are told that when they grow older, they will become impure. It requires an understanding and acceptance of self that I am yet to achieve. But I can only keep trying in the hopes of one day not being ashamed.