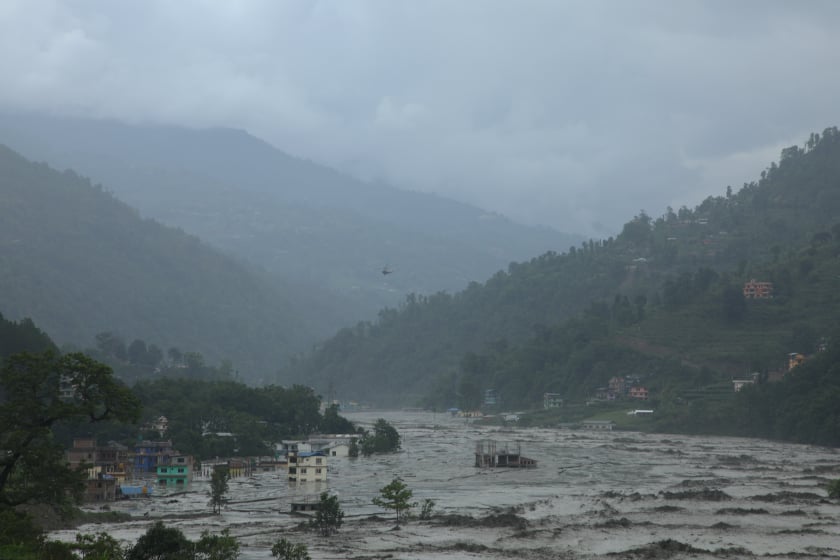 The Department of Hydrology has issued several safety alerts as incessant downpour increases risk of monsoon related natural disasters such as landslides, erosion, flooding and inundation.

Continuous downpour has increased the water level of the Melamchi River, and authorities have asked residents to practice higher caution. Settlements from Helambu to Melamchi (Shermathang, Dhap and Chautara) are considered at higher risk, with erosion occurring at several areas. Residents living in downstream areas have been asked to move inward, or at higher ground areas.

The Department of Hydrology and Meteorology has also issued flood alerts for people living along the banks of Koshi, Narayani, Rapti, Kankai, Bagmati and Kamala Rivers – including their tributaries. The department has requested authorities and locals to pay attention to water levels, and to move inward in case immediate threat is perceived.

Meanwhile, heavy rainfall has been measured in Bharatpur, Nawalparasi and Makwanpur Districts. The Department of Hydrology and Meteorology (DHM) issued a warning to the residents about the risky areas and urged them to stay vigilant after heavy rains in these areas since Wednesday morning.

In Bajura, erosion along the Budhiganga River is threatening more than a dozen settlements. In the past decade alone, the river has damaged thousands of bighas of cultivated land – worsening the woes of locals.

Poor drainage systems in urban areas are believed to make inundations in more frequent, and worse, unplanned development in the hills contribute towards erosions and landslides, threatening communities living in poorly built tracks.

According to official data, 27 people have been killed and 26 people are missing owing to rain-related disasters (as of June 30, 2021). 19 people have been injured, 462 houses completely damaged, and 110 houses partially damaged.