Senior orthopedic surgeon Dr Govinda KC has been barred from providing free medical care services at a health post in the remote Dolpa district in the beginning of August.

Dr KC informed about the restriction imposed on him through an opinion article published in online news portal Setopati on August 5. He wrote, “The Chair of Jagadulla Rural Municipality has threatened the chief at the Rimi Health Post and warned not to allow me to provide service to the public.”

“Despite threats, I provided service for two days. I was in Dolpa to provide service to the general public for at least three days. After repeated threats to the chief of the health post, I decided to stop providing the service and left the area,” he wrote in the opinion article.

Dr KC then moved to Jumla but was once again restricted by security personnel from providing medical services to the public.

Issuing a press statement on Saturday, the Nepal Medical Association has raised concern over Dr KC being barred from coming out of the Royal Garden Hotel, where he is currently staying, and meeting other people.

After retiring from Tribhuvan University Teaching Hospital (TUTH) following 26 years of service, Dr KC has been moving to remote northwestern Nepal, where health care is neither accessible not affordable for a majority of people.

Dr KC has been holding free clinics for patients in hospitals and COVID-19 isolation wards in western Nepal ever since the pandemic started.

He had arrived in Gamgadi of Mugu on 5 August after walking for two days from Jumla, and immediately started free consultations with patients, performing emergency operations at the Mugu District Hospital. After 12 hours of break-free service there, Dr KC had returned on foot to Jumla.

Dr Govinda KC, who was preparing to begin a fresh hunger strike beginning August 27, had earlier announced that he was postponing his strike for a week at the request of the local administration of Jumla. The objective of his strike is to exert pressure on the government to fulfil his demands for reforms in the medical education sector.

Issuing a statement, Dr KC also accused the government of being insincere toward fulfilling the agreements reached with him in the past.

“The leaders of the ruling party are focused on power game and make money through corruption,” he said. Dr KC also shared that a large number of security personnel had been mobilized outside the hotel to restrict him from going out.

His other demands include ensuring appointments of officials at Institute of Medicine (IoM) under Tribhuvan University strictly on the basis of seniority.

Despite a public outcry and condemnation from the medical sectors towards the restrictions imposed on Dr KC, there has been no official statement or explanation of such a move by the government.

According to Dr KC the security personnel cited “order from higher authorities” to restrict him in the hotel premises. 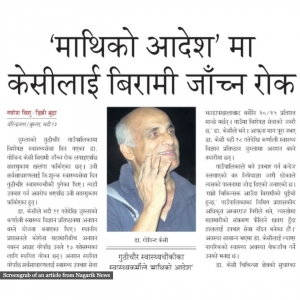 Using force to silence dissent and critique has been a part and parcel of the incumbent KP Sharma Oli-led government. Virologists, epidemiologists, public health experts, online and startup entrepreneurs, economists have voiced their concern towards the government’s lack of apathy to their suggestions in the time of a pandemic.

The Oli-led government has gradually advanced political impunity and crackdown on public objection, starting from the arrest of people for posting political satire on social media; detaining comedians and musicians that criticized government on YouTube; action against virologist Dr Sher Bahadur Pun; and using unprecedented force on campaigners of the recent Enough is Enough movement.