Reflect with Pride: Bridging the gap between acceptance and anti-heteronormativity
Read Time: 5 minutes

By Shreeya Maskey and Nushla Pradhan

Pride Month may have ended but the fight against injustice, prejudice, and bigotry facing the queer community continues.

After the 2007 decision by the Supreme Court to ‘legally recognize a third gender category, audit all laws to identify those that discriminated against LGBT people, and open the door to consider same-sex marriage’, Nepal began its journey towards ensuring gender equality – legally as well as socially.

In September 2015, Nepal promulgated a new constitution that for the first time recognized the rights of LGBTIQ people to equality and social justice and to citizenship.

However, the Constitution of Nepal is far from ensuring equal rights and opportunities for People of Marginalized Sexual Orientation, Gender Identity and Sex Characteristics (PoMSOGIESC) as Nepali society and laws still reinforce heteronormativity, be it by overlooking the legalization of same sex marriage or through gender-biased laws that invalidate the gender spectrum. 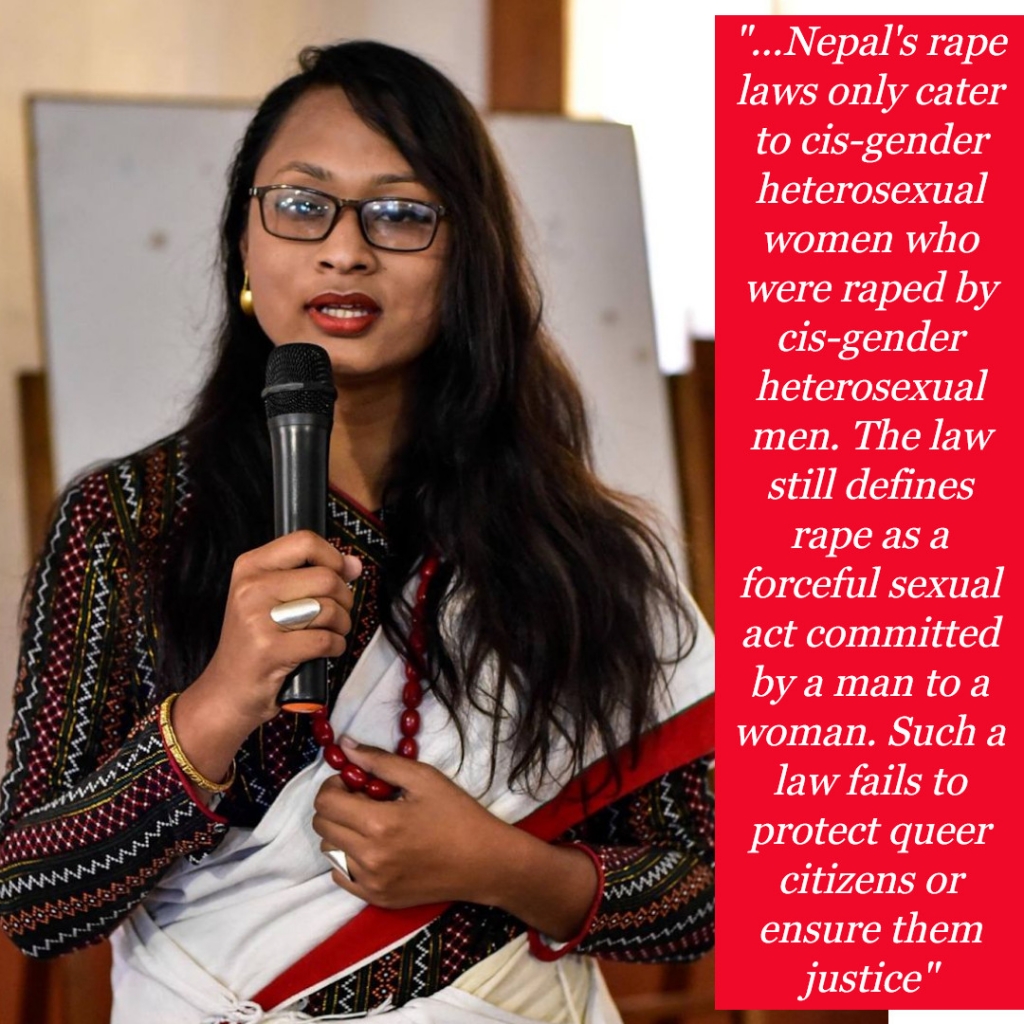 According to a UN Women Nepal analysis in 2020, translating the Supreme Court rulings into a legal framework that guarantees inclusion and protections is slow-paced and hindered mainly by bureaucracy and dominant patriarchal institutional and social culture.

“When we questioned the Ministry of Home Affairs about existing rape laws, the officials stated that Nepal’s rape laws only cater to cis-gender heterosexual women who were raped by cis-gender heterosexual men. The law still defines rape as a forceful sexual act committed by a man to a woman. Such a law fails to protect queer citizens or ensure them justice,” said Rukshana Kapali, a trans woman who advocates for the rights of LGBTIQIA+ community as well as the indigenous Newa people.

Labeling various gender identities in their correct form holds great importance not only in encouraging self-expression but also in discussing privilege and power.

All members of the queer community, despite having different individual gender identities, are labelled as “third gender” or “others” by Nepal government. Denying gender recognition to PoMSOGIESC only dismisses the prospect of legal establishment of one’s identity.

Identity documents, especially citizenship, in Nepal play a vital role in securing social benefits and services including voting, opening a bank account, making passports, and getting driver’s license. However, this fundamental process of gaining one’s legal documents is a rather tedious process for trans persons.

As a result of such restrictive laws, PoMSOGIESC are subjected to greater inequalities within the society. She added, “Trans people face a lot of skepticism, disrespect and distrust from government officials and workers who question their identity at every step.”

These forms of legal discrimination easily transcend into PoMSOGIESC facing bigotry in society through internalized homophobia and heteronormativity.

“Our society has normalized treating queer people with injustice and using queer terms as insults, as if queer identities are something to be ashamed of,” said SJ, a member of the Queer Youth Group who identifies as a non-binary person.

There is a palpable lack of self-awareness even in the education system as people choose to remain ignorant and propagate stigma against PoMSGIESC without questioning their own biases. Our textbooks and teachers don’t help either.

“I had to experience bullying from an early age during my school years. Later, I was denied admission to the university I wanted to enroll in because of my gender identity,” said Kapali.

The challenges facing queers while growing up in a heteronormative society do not end with discrimination and marginalization at social levels but seep into the internalization of regressive values in individual levels as well.

“Before I gained proper knowledge about queer issues and had the chance to come to terms with my gender identity, I did not even realize that I could be anything other than a cisgender heterosexual person,” said SJ. The assumption of heterosexuality as the norm restricts anyone from believing in identities outside the gender binary.

“In terms of modern-day Nepali society, where we are at could be called a double-edged sword in regard to acceptance and ignorance,” said SJ. Today’s heteronormative society poses a distinct presence of hypocrisy and lack of acknowledgment towards queer issues, which only serve to perpetuate gender-based biases.

“The generation I belong to loves preaching that they are most welcoming and open minded of the genders spectrum, yet cases of bullying and cybercrime against queers have never been higher. Even educated and ‘woke’ people use various excuses to justify their behavior and passivity,” SJ added.

The many instances of alarming legal and social discrimination against the queer community reflect the heteronormative status quo. Despite many having easy access to a plethora of resources to educate themselves about issues concerning PoMSGIESC, people choose to disregard their privilege and continue with their discriminatory behavior towards queer persons.

Denying and failing to acknowledge the inequalities against PoMSOGIECS only trivializes their issues, and is a clear sign of prejudice, injustice and bigotry within Nepali society that needs to be addressed as well as called out.