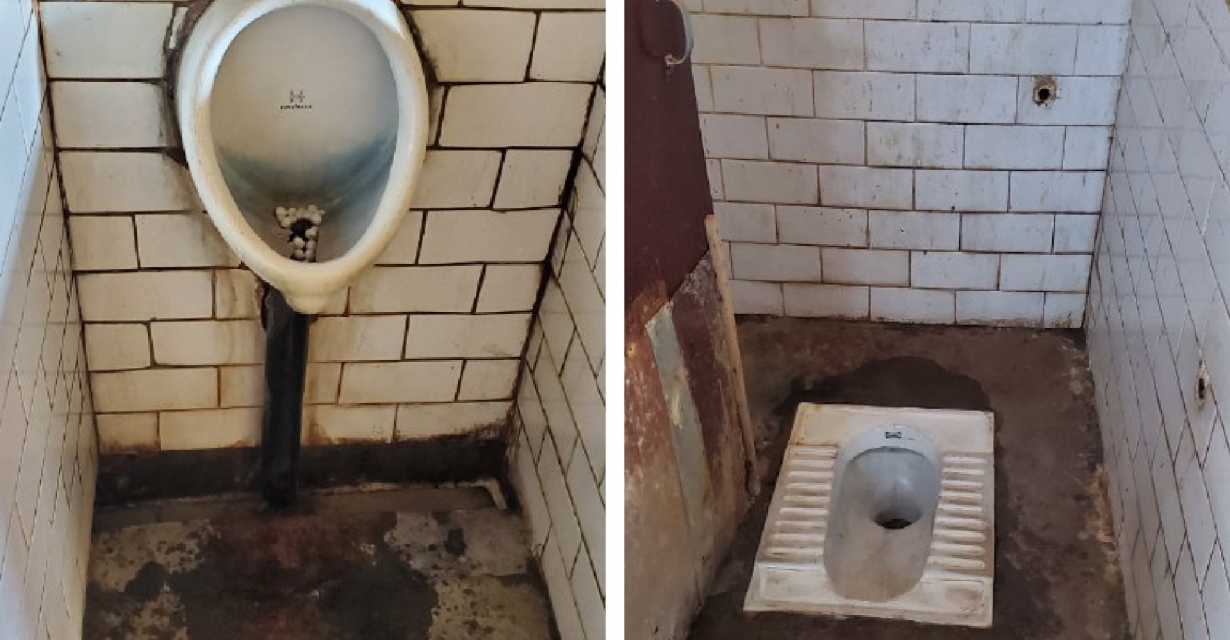 According to a report by the City Planning Commission published in 2019, the Kathmandu Metropolitan City has a total of 56 public toilets. If we are to go by recent reports on various national dailies, Kathmandu Valley has a total of 65 public toilets, excluding hospitals, public offices, parks, and petrol pumps. These toilets serve over one million inhabitants of the central capital on a daily basis.

As per the 2011 census, Kathmandu Metropolitan City has a population of 1,003,285. Though the standard set by the World Health Organization dictates that there should be one toilet per 50 persons and a toilet at every 500m distance, this is not the case in Kathmandu. Public toilets in Kathmandu are limited not only in number but also in quality.

According to Sanjay Kumar Mallik, Office Chief at the Brikutimandap Park and Exhibition Center, over 1,000 visitors come to the park on a daily basis, even more if there are events scheduled. “The Social Welfare Council provides us a yearly budget of five million rupees and we earn some more from the park. Though we generate an average revenue of more than 100 million rupees per year, we are not authorized to use a single penny from the income.” 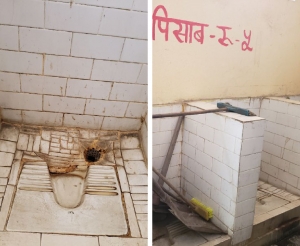 Financial sustainability is a major challenge facing public toilets. “Our monthly budget for maintenance and repair of toilets is Rs 2,000,” he said.

Public toilets not only add to a city’s quality as well as viability but with fitting ingenuity they could also serve as aesthetically pleasing structures. Nonetheless, public toilets at public spaces like Bhrikutimandap are a cry for help. The dilapidated status of public toilets and lack of WASH are certain to put public health at risk. 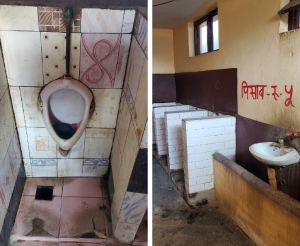 Stating that the rundown toilets were a result of lack of budget as well as manpower, Mallik said, “We have a total of five toilets around the park area, but only two staffs to clean and maintain the toilets. The same staffs also look after the cleanliness of the entire park, so it is not possible for them to do their jobs properly.”

Bhrikutimandap has two public toilets inside the Exhibition Hall, two around the open market at the park and one at the main gate. Park authorities have given one of the toilets (at the gate) for rent because they thought doing so would help in maintaining WASH in the toilet. The toilet was built with the financial support of Association of International INGOs in Nepal (AIN) and has one disability-friendly toilet, informed Mallik.

“The tenants pay almost 1.26 lakh rupees rent per year for the toilet at the main gate and they have also maintained cleanliness. But, that is not the case with other toilets in the park. Visitors hesitate to pay even five-ten rupees to relieve themselves; they’d rather defecate in the open. I have seen many people urinating in the open just because they are too lazy to walk to the public toilets,” informed Mallik. 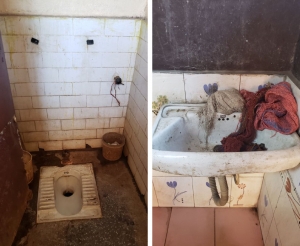 Public toilets are meant to facilitate the general public, but a proper public restroom is still a luxury in the Valley. These toilets are mostly used by passersby, shoppers and shopkeepers. However, most public toilets don’t have running water, soap, dustbins, functional doors and even latches. Public toilets in Kathmandu reek of urine because authorities concerned invest bare minimum to keep the restrooms clean. Along with this, none of the toilets are disabled-friendly.

Kathmandu was declared an open defecation-free zone on September 16, 2019 without any efforts to build even a single public toilet. Piles of feces at overhead bridges around Jamal and Ratnapark areas, one of the most frequented areas of Kathmandu, are stark examples that the city is anything but free of public defecation.

A proper public toilet with basic amenities is essential to make cities more accessible, inclusive, and convenient for all members of society. Hence, they should be designed in such a way that they are accessible to new mothers, children, differently-abled, transgender people as well as the elderly. Accessibility features for menstrual hygiene management is also equally important. But for a park that was built in 2022 BS, toilets in Bhrikutimandap are as old as time.

“We understand the prerequisites of a functional and clean public toilet, but we simply don’t have the manpower or budget to maintain that,” said Mallik.

Meanwhile, public toilets at the Bhadrakali-based Ripumardini Petrol Pump are faring comparatively better. The toilets at the petrol station have clean running water, soap, and buckets for water.

“Ample water and proper drainage system are keys to a clean toilet. Though we don’t get a budget for toilet maintenance, we do get water delivered by Nepal Army’s tanker every day. We also manage around Rs 1,200 every month from among ourselves to invest in toilet cleanliness,” said Ram Bahadur Ranabhat, Assistant Accountant at the Ripumardini Petrol Pump.

He added that reusing broken tiles and water could be great ways to save money while repairing public toilets.

The petrol pump, run by Nepal Army, has a total of five toilets for public use. It also has one toilet with commode meant for foreigners who feel uncomfortable in traditional toilets with pans. Though over 1,000 visitors use the toilets on a daily basis, Ranabhat said they are able to maintain hygiene at the toilets because the users are cooperative. 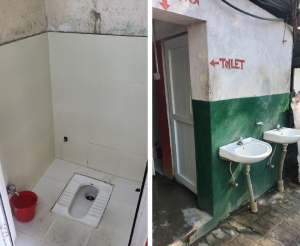 One of the toilets for public use at Bhadraklai Petrol Pump in Kathmandu.

“We keep a tight vigil to ensure that the toilet users don’t smoke inside, spit paan or scribe dirty texts on the walls and doors. I believe that toilets are also called restrooms because people should be able to sit there in peace and relax. So, I take personal responsibility to keep the toilets hygienic and clean. I also think public toilets should be made free of cost all over the country so as to discourage people from defecating in the open,” Ranabhat opined. 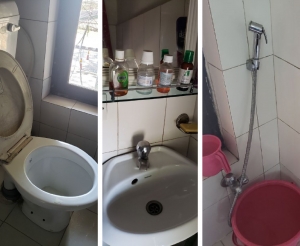 Toilet with commode for foreigners at Bhadrakali Petrol Pump in Kathmandu.

Stating that he has noticed the tendency among women to flush sanitary pads and diapers in the absence of a dustbin, Ranabhat said he is planning to soon keep dustbins in the toilets. The petrol pump has employed only one cleaning staff for the toilets, and still the toilets are clean majorly because the authorities concerned are personally involved in keeping them sanitary, according to Ranabhat.

The lack of operation and maintenance guidelines, standard specification of public toilets, monitoring and reporting system from the state level give way to mismanaged and unhygienic public restrooms. It is crucial to understand that the poor condition of public toilets is only further discouraging people from using them.