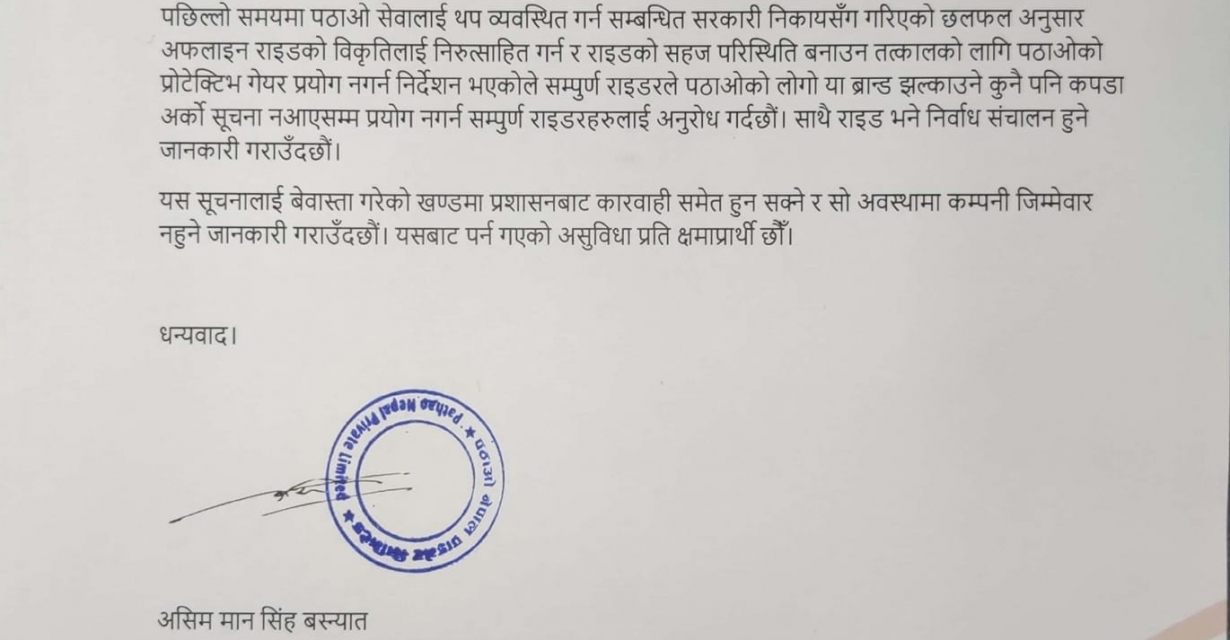 A group of taxi drivers indiscriminately thrashed a Pathao rider in New Bus Park of Kathmandu on Monday evening. Enraged taxi drivers assaulted the Pathao rider saying that the latter had tried to ‘steal their passengers’ by offering a cheaper fare.

Videos of the incident were quickly and widely shared on various social media platforms.

When the incident was reported to the Metropolitan Traffic Police Office (MTPO), it intervened by making Pathao riders stop wearing their uniform.

“Earlier, we used to receive complaints regarding taxi drivers demanding exorbitant fare and refusing to go at a cheaper rate, but lately complaints of Pathao riders bargaining with passengers for fare have increased,” he said.

Adhikari added that if Pathao riders did not gather in groups, they would not court any controversy. “They should not try to compete with other services or gather at different sites in search of customers,” he said.

He added that Pathao riders wearing their uniform looked like some organized gang.

Issuing a statement issued on Tuesday, Asim Man Singh Basnyat, Regional Director of Pathao, said that as per the discussion held with the concerned agencies to manage their services, discourage offline rides, and create a comfortable environment for the ride sharing service, Pathao riders had been directed not to wear their uniform.

“Accordingly, all riders are requested not to wear any clothing that reflects Pathao’s logo and brand until further notice,” the statement read.

Taxi entrepreneurs have long been against ride hailing services under the pretext that such services had disproportionately harmed their business. Similarly, the Department of Transport Management (DoTM) has also repeatedly cracked down on ride hailing services saying vehicles registered for private use cannot be allowed to carry public in exchange for money.

In a notice issued on March of 2020, DoTM imposed a blanket ban on ride hailing services saying that carrying passengers in private vehicles and charging money from people would go against the Motor Vehicles and Transport Management Act, 2049 BS, which states that vehicles registered for one purpose cannot be used for another.

The notice was issued a month after the Patan High Court issued an order to the government stating that instead of banning ride sharing companies like Tootle and Pathao, the government should make laws as well as policies to regulate them.

Stating that Nepal’s law had no provision for the operation of such services, the Department of Transport Management and Traffic Police have repeatedly stopped the ride hailing services from operating.

Gogan Bahadur Hamal, Director General of the Department of Transport Management, on July, 2020 had said that a law in line with Patan High Court’s ruling was being drafted to manage service providers like Tootle and Pathao.

“A bill regarding the same has been sent to the Ministry of Physical Infrastructure and Transport. It will be presented at the parliament for approval once House session resumes.”

A year later, the said bill is still gathering dust at the Ministry.