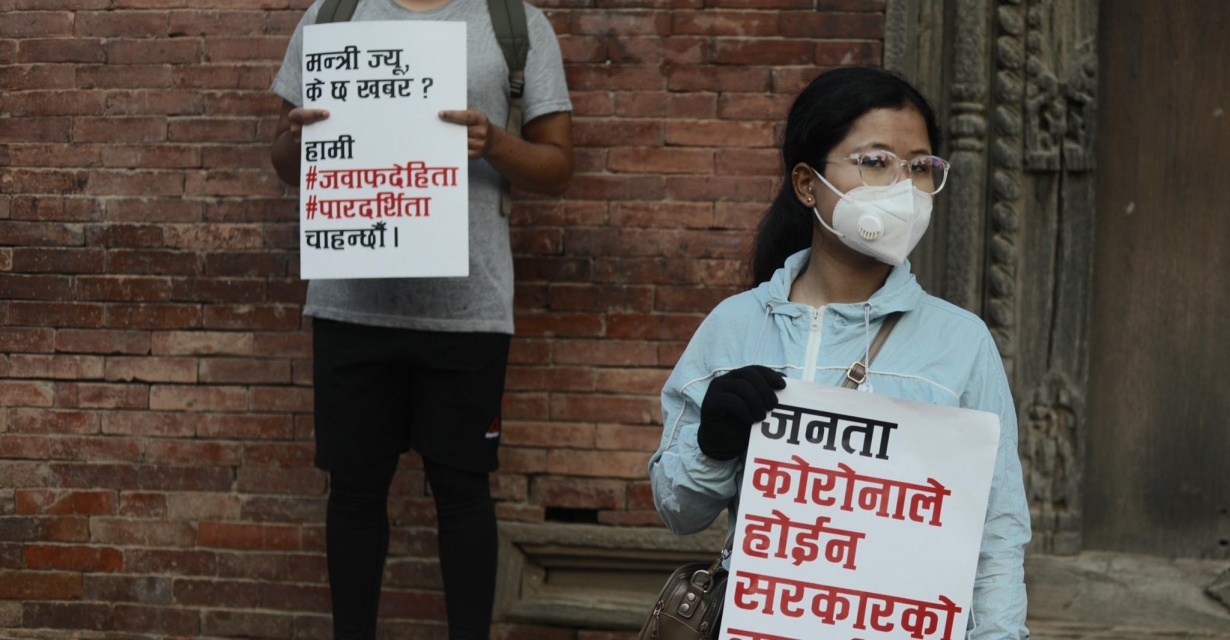 The government imposed a nation-wide lockdown and gradually extended it for months at stretch so that focus could be centralized in preventing the spread of Covid-19.

While we are nearly four months into the lockdown, politicians can be seen using every ounce of their influence to gain power rather than working on materializing the objective of the lockdown.

Non-gazetted first-class officers (Nayab Subbas) are protesting some provisions proposed in the Federal Civil Service Bill, passed recently by the State Affairs and Good Governance Committee of the House of Representatives. They have said “provisions stipulated in the bill were deliberately designed to obstruct the career development of more than 35,000 non-gazetted first-class officers”.

Journalists are protesting the media houses’ refusal to pay as well as delayed payment during the lockdown despite them working in the frontline and media corporations earning millions in profit.

Similarly, various political parties and their sister wings have been protesting the implementation of MCC Nepal compact for the past week. The compact, however, is not likely to be endorsed anytime soon as President Bidya Devi Bhandari prorogued the ongoing session of the parliament on Thursday, which essentially halts all kinds of businesses at the parliament.

A hunger strike (satyagraha) has entered 10th day under the Enough is Enough campaign led by youths who do not associate with any political party. Four campaigners have been hospitalized after their health deteriorated due to the hunger strike. The government has offered to sign an agreement, which activists claim is vague, with the campaigners asking them to end the strike.

Dalit rights activists across the country have been protesting with demands for justice to the six youths who were allegedly killed in an incident of caste-based violence in Soti of Rukum. No takers for the protesters’ demand as of yet.

Likewise, taxi entrepreneurs have handed their vehicle keys to the government as pa pert of their protest demanding to be either allowed to run their taxis or be provided a relief package for the lockdown period.

Meanwhile, more than 30 people in Kathmandu alone have been found infected with coronavirus despite having no travel history. Health experts are concerned about community transmission as the virus was detected in two sewers of the Valley.

The data with police show that 413 people, including 54 minors, have committed suicide in Province 1 alone since March 14, the first day of the ongoing lockdown. Poverty invited by the ever-extending lockdown and uncertainty of future among other things are said to have caused a spike in incidents of suicide.

While the country is in tatters with pending as well as current unresolved issued at hand, Nepali politicians are busy flexing their muscles for power sharing as the citizens suffer. Perennial political meetings are being held that discuss retaining power, but no time for citizens dying of hunger.

On one hand Prime Minister KP Sharma Oli is confident that he is doing his best and no one except himself can do a better job at governing, on the other hand his opposition as well as allies have failed to present a superior plan for the nation’s betterment.

The politics of distraction has led the citizens, especially the working class, to the present pitiful state. Citizens of a country with good governance need not be checking the news every other hour just to track how the leadership is ruining their present and future.

The political and bureaucratic environment should be such that citizens can rest assured that their administration is working for their welfare so that more focus can be shifted towards mental, physical, emotional, and, economic well-being.