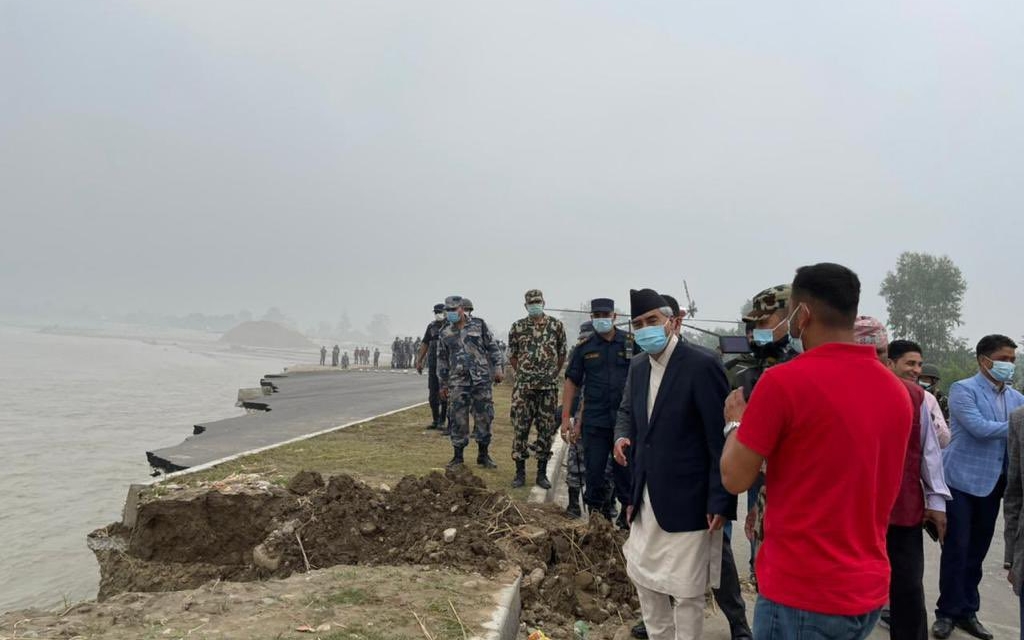 Prime Minister Sher Bahadur Deuba is scheduled to visit parts of eastern Nepal hit by floods and landslides today to take stock of the situation and ensure relief measures are being taken.

The team is scheduled to inspect the disaster-ravaged districts including Ilam, Panchhthar and Sunsari by a helicopter.

According to Janak Raj Bhatta, Personal Secretary to the Prime Minister, PM Deuba is scheduled to get information from the Chief District Officers of Panchthar and Ilam about the damage caused by the recent post-monsoon rain in the districts.

He is also scheduled to discuss the relief packages and assistance to be provided for the disaster-affected people and the programme to be taken in the coming days, said Bhatta.

Similarly, the Prime Minister is also scheduled to visit Pakali Barracks, Sunsari, where he would meet the Chief District Officer and receive information about the damage caused by small streams, originating from Koshi River and Chure area, he informed.

The PM-led team is scheduled to return to Kathmandu today evening.

Torrential post-monsoon rains in the past few days has adversely affected normal life in different parts of the country, including eastern Nepal as more than 100 have been killed and 33 are still missing across country in the last four days.

The Ministry of Home Affairs, issuing a detailed report of the casualties caused by the untimely rain during the last four days, stated that a total of 32 people were injured in the disasters while 71 houses were completely destroyed due to the various disasters triggered by unseasonal rain across the country.

Among those who lost their lives, majority are from Panchthar district in the eastern region. The deceased were either trapped inside their house in landslide, or were swept away by floods. Of the Panchthar casualties, 21 deaths were recorded in Milkajung Rural Municipality alone.

Ilam, another mountainous district in eastern Nepal recorded 14 deaths due to flood and landslide, 10 each died in Sunsari and Bajhang districts, seven died in Dhankuta, six in Humla, four in Baitadi. Similarly, Udayapur, Pyuthan, and Dadeldhura, each recorded two casualties and Morang, Bhojpur, Solukhumbu, Sindhuli, Salyan, Kailali, and Accham each recorded one fatality.

The highest number of missing people were recorded in Bajhang district with a total of 19 persons gone missing.

Of those injured, highest number (13) was recorded in Doti district followed by Panchthar with nine injuries.

The government has claimed that over 1,500 people were rescued during the disasters across the country.

Although rainfall has started subsiding across the country, the Meteorological Forecasting Division has forecast light to moderate rainfall. Similarly, the highways and electricity supply obstructed by rainfall and landslides has started resuming in the country.

According to the Department of Roads (DoR), the damages to roads have been estimated at Rs 250 million while the damage caused to bridges across the country is worth Rs 1.05 billion, according to preliminary estimation. As of Thursday, roads at 17 locations of five highways were disrupted by the disasters.

DoR officials said that traffic along road segments at seven different locations is yet to resume while the many roads have been repaired and traffic has resumed there. Likewise, a total of 15 bridges have been wrecked fully or partially by the natural disasters.

A rare system caused by combination of low-pressure system from the Bay of Bengal and westerly wind from the Caribbean sea had caused the untimely heavy rain in Nepal.