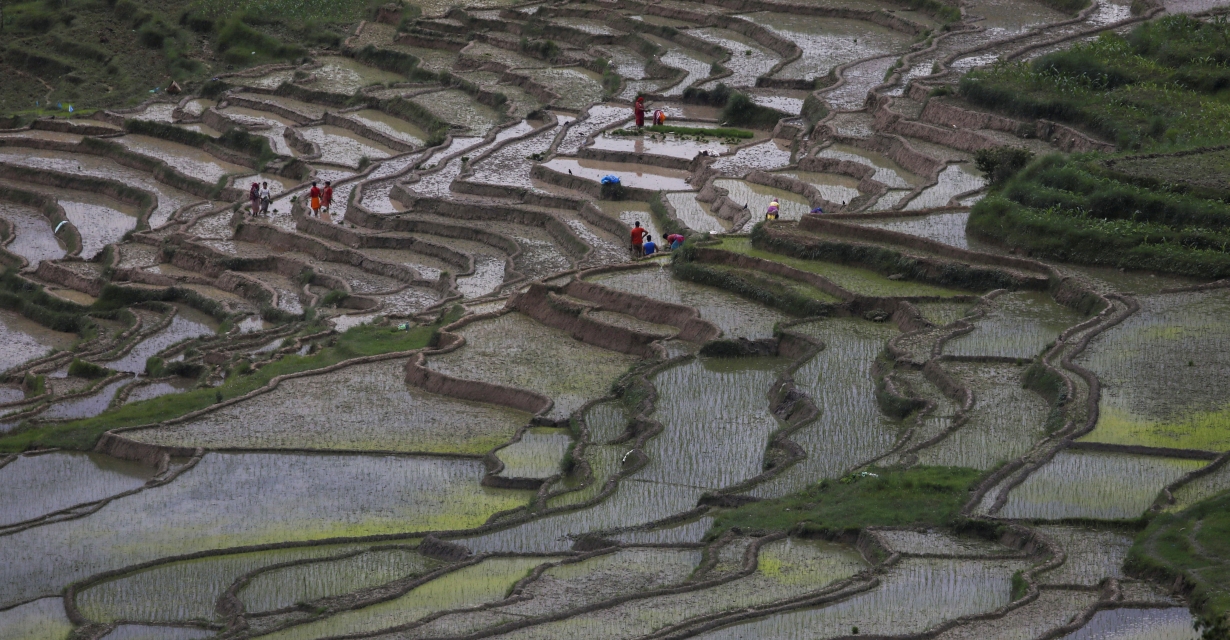 PYUTHAN, Nepal, July 15 (Thomson Reuters Foundation) – Two months ago, Krishna Prasad Jaisi lost his job as a chef in neighbouring India when the coronavirus pandemic shut down the hotel where he worked. With the business still closed, he’s unsure he’ll ever get his job back.

“I have heard that they are cutting down the number of workers there,” said the 33-year-old, who returned to his home in Nepal when his job disappeared.

To find another way to support his family of five, Jaisi is trying his hand at farming this year, having leased a half-hectare of land near Pyuthan, in central-west Nepal, to produce staples such as maize and paddy rice.

But that too is now under threat.

Fall armyworm, a pest new to Nepal this year, is devouring his maize field – and he is facing waves of locusts as well, as climate change brings conditions conducive to the spread of the insects.

“Larva of this worm are scattered almost everywhere in the field,” Jaisi said, standing amid half-eaten maize leaves.

“I have seen this pest for the first time and I don’t have much idea about its control,” he said.

He and other villagers successfully drove from their fields a first small swarm of locusts early this month, by using smoke and beating utensils against pans. But now a second swarm is arriving, he said.

“I am worried if the paddy and remaining maize will remain after the second swarm,” Jaisi said.

With crucial migrant jobs, remittances and crops disappearing this year, families in Nepal – one of South Asia’s poorer countries – face a growing risk of hunger and worsening poverty this year, officials warn.

Lockdowns in countries that normally employ large numbers of Nepali migrant workers – from India to Saudi Arabia and Malaysia – have left many with little prospect of new jobs or alternative incomes.

Giriraj Bhandari, another resident of Pyuthan, contracted the coronavirus while working as an electrician in Dubai. After recovering and returning home he now hopes to find a job in his own country, using the skills he acquired abroad.

But with Nepal’s economy – like many around the world – struggling under coronavirus restrictions, he and his family admit he may have a hard time.

“The prospect of getting a job during this time is very dim so he is planning to earn from agriculture until he gets a job,” said his wife Rima, as her husband waited out 14 days of quarantine.

She said the pest attacks on farm fields this year leave her uncertain whether she and her husband will be able to feed their family, with other job options rare.

“The extent of damage that these insects have done in our neighborhood point toward a bleak future in farming,” she said.

Arjun Kumar Kakshyapati, the mayor of the municipality of Pyuthan, said about three-quarters of maize in the area had been affected by armyworms this year.

“Though we distributed subsidised pesticide, its effectiveness was not as expected,” he said.

He said he expects about half of the maize crop in the area to be lost this year to armyworm infestations.

So far only one ward of the municipality was hard-hit by the first locust swarm that arrived, in the first week of July, the mayor said.

But a second and third swarm have been spotted and they “may cause more damage,” he added.

More than 2,000 people have returned to the municipality of Pyuthan from abroad – and more are still coming, said Kakshyapti.

The municipality has about 38,500 residents.

The mayor said most of those returning would try to farm to earn an income, leaving them vulnerable to pest problems and crop damage.

Continuing crop losses to armyworms and locusts – plagues the community has not been prepared for – “would invite a dire situation”, he said.

“The crop harvest this year could be very lean and with income sources gone for many people, a majority of families could struggle for food, let alone education and other needs,” he added.

But the municipality is trying to help, using limited funds to try to make resuming farming easier, the mayor said.

Each ward in the area has received a 300,000 rupee ($2,500) emergency allocation, he said, to provide farming inputs as needed.

And “for those who don’t have land for farming we have planned to give them employment in other sectors such as construction” he added.

Last year, about 300 people were hired by the municipality to carry out work such as building or maintaining irrigation channels. This year that should rise to 800, Kakshyapti said.

But he admitted that “it is not possible to provide a job for everyone who returns from abroad and agriculture still remains the major source of income for most of the families”.

That may mean more hungry people in months ahead, particularly if locust damage grows, the mayor and families say.

“It has become a major challenge for us to make agriculture thrive when everything is moving in wrong direction,” Kakshyapti admitted.