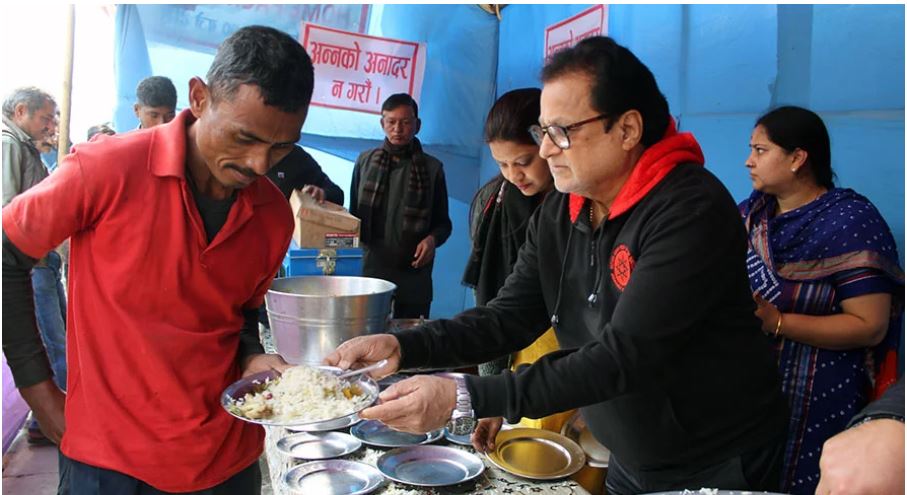 Meal at Rs 10 per plate a hit campaign in Biratnagar
Read Time: 1 minutes

When Dilip Ghadewa started the campaign to provide the needy with one course meal at just Rs 10 in Biratnagar, many had raised doubts about the drive’s sustainability.

However, one and a half month later, the campaign has drawn ample supporters to fund meals enough for one year.

“A total of 365 people have committed to support the campaign for 365 days this year. Now, if any more people want to help, they will be registered for next year,” Ghadewa said.

Local Nandu Tapadia, Umesh Yadav and Mohammad Kadir are also assisting in the campaign with their meal stall located in front of the Jain Bhawan in Mainroad of Biratnagar.

Though the meal time is set for 11:00 am, a crowd of interested eaters gather around the stall before time. A token system has been arranged to manage the crowd.

Under the campaign, a total of 100 kg rice along with 300 kg vegetables are served to around 1,000 people every day. While the range of vegetables varies each day, garlic and onions are not added to the food.

The campaign was launched with the aim of feeding rice and vegetables at 10 rupees, targeting the needy, laborers and those who cannot afford to eat at a hotel.

After the campaign turned out to be a hit in Biratnagar, Itahari and Damak have also initiated a similar drive.