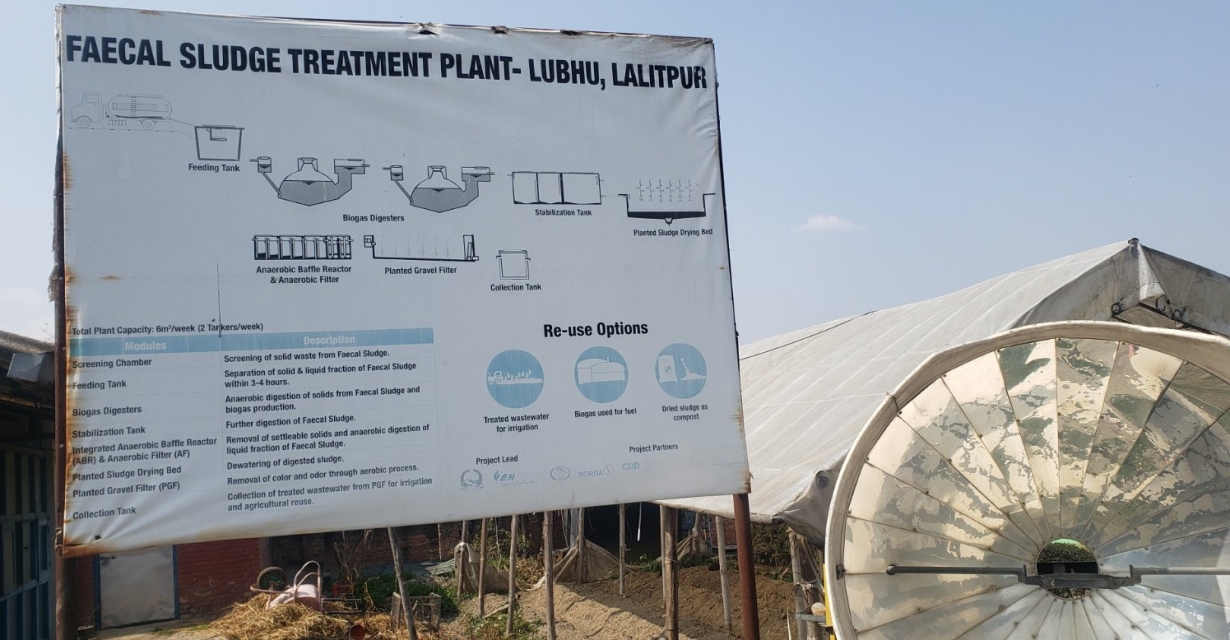 The plant built with support from BORDA, ENPHO, Saligram Bal Griha and CDD Society is the first and only of its kind in the entire country. The treatment process provides resource recovery options: treated wastewater for reuse in irrigation, biosolids as soil conditioner for farming, and biogas for cooking and lighting in the treatment plant caretaker’s home.

The treatment plant site is spread on around 300 m2 of land owned by Saligram Bal Griha, a local community-run orphanage. They use the land for agricultural purposes, the proceeds of which go towards financially sustaining the orphanage.

A step in the process of treating fecal sludge at the treatment plant.

A step in the process of treating fecal sludge at the treatment plant.

Fecal sludge goes through three phases — liquid, semi-solid and solid — before it turns into manure.

A farm at the site where vegetables are grown using the end product from the treatment plant as fertilizer. The food grown in the garden is primarily used for consumption by the kids residing in Saligram Bal Griha whereas excessive produce is sold in the local market.

With 2,365 households, Mahalaxmi Municipality generates about 3.85 m3 of sludge per day and the single-most treatment plant is not even nearly enough for the area, let alone the entire Lalitpur district.

Though the Asian Development Bank (ADB) is currently funding the construction of a new treatment plant in Dhobighat of Lalitpur, which is expected to take care of most of the fecal sludge in the city, the stark negligence towards the metropolis’ Fecal Sludge Management (FSM) cannot be ignored.

ADB —through the Sanitation Financing Partnership Trust Fund under its Water Financing Partnership Facility, a collaboration with the Bill and Melinda Gates Foundation—has been supporting and working closely with its South Asian developing member countries, particularly Nepal, Bangladesh, and India, to prepare and establish regulatory frameworks on FSM.

ADB is also assisting with piloting innovative and appropriate FSM interventions that can be scaled up and replicated in the region in future.

Fecal sludge, if well managed, can be a source of energy and fertilizer. Moreover, it can advance overall sanitation. As a result, FSM has increasingly become a priority development agenda for national and local governments, as well as development partners.

With the Ministry of Water Supply and Sanitation approving and issuing a Fecal Sludge Management Institutional and Regulatory Framework in 2017, Nepal became the first country in South Asia to have a countrywide FSM framework.

According to the framework, cities have not been able to make the process of evacuating, collecting, transporting and managing fecal sludge from household septic tanks systematic. Individual labourers are hired to clear the septic tanks.

Prashant Singh Thapa, Engineer at the Department of Environment and Disaster Management of Mahalaxmi Municipality Office, informed that his office had the plan and design ready to build a new treatment plant, but the project has been stalled due to political instability.

Thapa added that lack of regular desludging and adequate septic tanks were the biggest challenges faced by Mahalaxmi Municipality in FSM. “Though people know sanitation is of utmost importance, the government does not prioritize projects related to sanitation,” he said.

“The Municipality office has also proposed to improve the existing treatment plant and increase its capacity as the plan for a new plant has been stalled for too long. For want of adequate treatment plants, most fecal waste is dumped into local rivers,” added Thapa.

Thapa said that sewerage leakage, no responsible agency to timely collect and dispose fecal sludge, lack of fecal sludge treatment plants along with lack of clear policy and intervention from government have contributed to long-term pollution of environment as well as water bodies, putting at risk both humans and water beings.

Meanwhile, Pradip Amatya, Environment Engineer at the Lalitpur Metropolitan Office, said that his office had filed several cases in court against the Office of the Prime Minister and the Ministry of Urban Development in regards to fecal sludge management and river pollution due to haphazard disposal of gray water as well as fecal waste.

“In almost every two months, we have hearings in court about the cases. The central government utterly lacks a concrete action plan and relies completely on foreign donors for intervention. There is also a confusion among authorities regarding which district does the Bagmati River belong to and who should look after its cleanliness,” said Amatya.

He added that the Bagmati Action Plan had been limited to papers as the river is used as a dumping site for all types of wastes without hesitance.

The Bagmati Action Plan was formulated with the aim to restore and conserve the Bagmati River and its tributaries in an integrated and coordinated approach. But, as fecal sludge is dumped into the river, its life is in danger.

Similarly, the environmental degradation of the river system has accelerated due to increase in unplanned urbanization of the Kathmandu valley.

“The least the central government could do is give us the prerogative to treat and manage fecal sludge produced in the area, establish DEWATS, and provide adequate budget to buy lands for the construction of treatment plants. We could manage the funds to build treatment plants on our own,” he added.