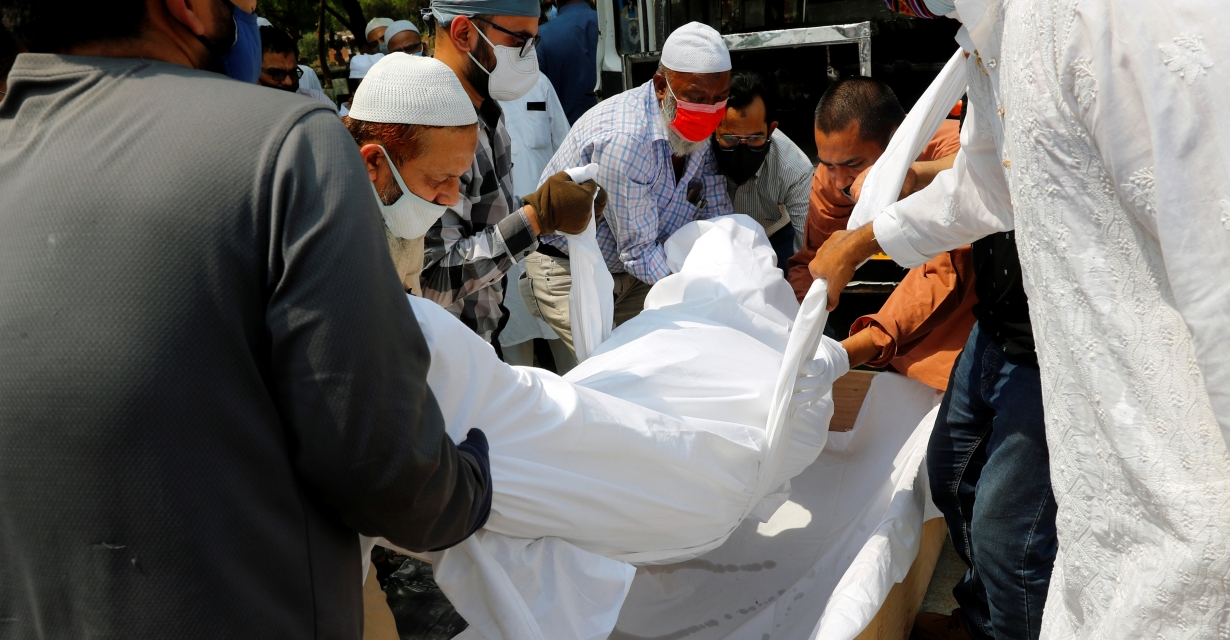 People carry the body of Laeeq Ahmed, 67, who died from the coronavirus disease (COVID-19), during his funeral at a graveyard in New Delhi, India, April 27, 2021. REUTERS/Adnan Abidi
India’s coronavirus deaths exceed 200,000 after record surge in cases
Read Time: 4 minutes

India’s toll from the coronavirus surged past 200,000 on Wednesday, the country’s deadliest day yet, as shortages of oxygen, medical supplies and hospital staff compounded a record number of new infections.

The second wave of infections has seen at least 300,000 people test positive each day for the past week, overwhelming healthcare facilities and crematoriums and driving an increasingly urgent international response.

The last 24 hours brought 360,960 new cases for the world’s largest single-day total, taking India’s tally of infections to nearly 18 million. It was also the deadliest day so far, with 3,293 fatalities carrying the toll to 201,187.

Experts believe the official tally vastly underestimates the actual toll in a nation of 1.3 billion, however.

The world is entering a critical phase of the pandemic and needs to have vaccinations available for all adults as soon as possible, said Udaya Regmi, South Asia head of the International Federation of Red Cross and Red Crescent Societies (IFRC).

“This is both an ethical and public health imperative,” he added. “As variants keep spreading, this pandemic is far from over until the whole world is safe.”

Ambulances lined up for hours in the capital, New Delhi, to take COVID-19 victims to makeshift crematorium facilities in parks and parking lots, where bodies burned on rows of funeral pyres.

Coronavirus sufferers, many struggling for breath, flocked to a Sikh temple on the city’s outskirts, hoping to secure some of its limited supplies of oxygen.

Hospitals in and around the capital said oxygen remained scarce, despite commitments to step up supplies.

“We spend the day lowering oxygen levels on our ventilators and other devices as our tanks show alarmingly dipping levels,” Dr Devlina Chakravarty, of the Artemis hospital in the suburb of Gurgaon, wrote in the Times of India newspaper.

“We make hundreds of calls and send messages every day to get our daily quota of oxygen.”

The Mayom Hospital nearby has stopped new admissions unless patients brought oxygen cylinders or concentrators with them, its chief executive, Manish Prakash, told television channel NDTV.

“The current wave is particularly dangerous,” he said.

“It is supremely contagious and those who are contracting it are not able to recover as swiftly. In these conditions, intensive care wards are in great demand.”

Supplies arriving in New Delhi included ventilators and oxygen concentrators from Britain, with more sent from Australia, Germany and Ireland.

“First shipment of oxygen generators from #Taiwan to #India is leaving this week,” Kolas Yotaka, a spokeswoman for Taiwan President Tsai Ing-wen, said on Twitter. “We are all in this together.”

The Asia-Pacific region, in particular, was susceptible to contagion from the highly infectious variants in India, given the region’s low ratios of vaccination, it added.

“At this point, lives are so much more important than livelihoods,” the University of Michigan professor said on Twitter. “Provide assistance to the poor, but please lock down and vaccinate.”

U.S. President Joe Biden said he had spoken at length with Indian Prime Minister Narendra Modi on issues such as when the United States would be able to ship vaccines to the South Asian nation, and added that it was his clear intention to do so.

“I think we’ll be in a position to be able to share, share vaccines, as well as know-how, with other countries who are in real need. That’s the hope and expectation,” he told reporters at the White House on Tuesday.

The U.S. State Department’s coordinator for global COVID-19 response, Gayle Smith, warned that India’s challenge called for a sustained effort: “We all need to understand that we are still at the front end of this. This hasn’t peaked yet.” (REUTERS)