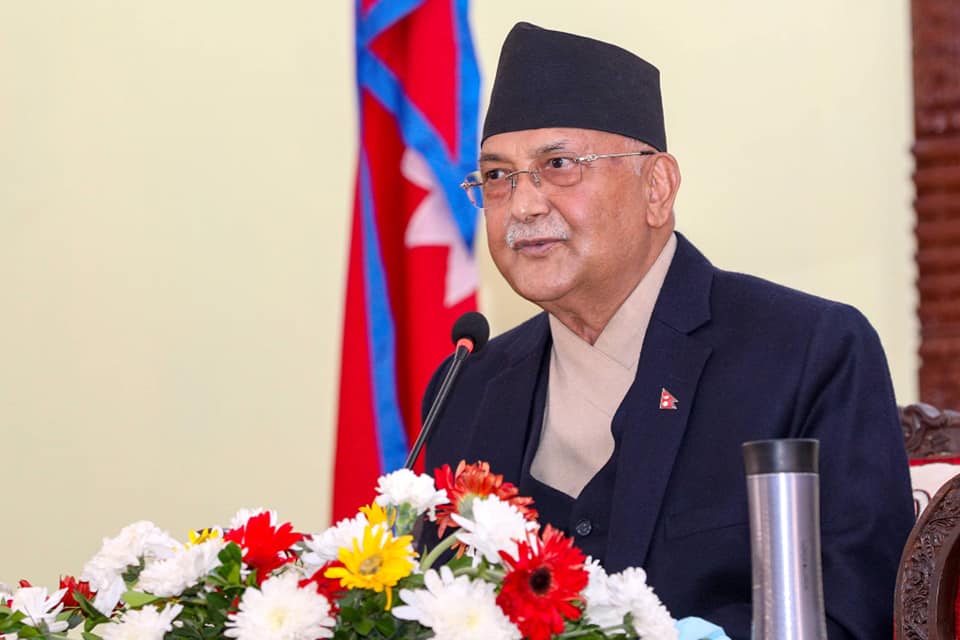 In a video message released on the occasion of World Human Rights Day, which is celebrated on December 10 every year, Prime Minister KP Sharma Oli tooted his own and his government’s horn as he listed out their achievements in various sectors.

“Despite being a socio-economically underdeveloped and heterogeneous geographical structure, Nepal’s constitution guarantees almost all universally accepted human rights treaties as fundamental rights. This is an exemplary aspect in itself in terms of national capacity,” he said in his message.

“Nepal has made clear its full, unwavering and unwavering commitment to human rights by constitutionally guaranteeing not only civil and political rights but also some economic, social and cultural rights that are believed to be achieved in a progressive way and cannot be treated by the courts as fundamental rights.”

Nepal has been criticized by various national as well as international rights organizations for stalling to amend its laws to ensure accountability for the serious crimes committed during the 10-year Maoist insurgency, which ended in 2006.

The process has been in a deadlock as authorities continue to favor impunity for perpetrators—both security forces and members of the ruling Nepal Communist Party—over justice for victims.

According to Human Rights Watch, despite a two-thirds’ parliamentary majority, the Oli government made little progress in implementing the federal structure created under the 2015 constitution, including devolving some powers over justice and policing.

In 2019, the government proposed new laws curtailing free expression and limiting the powers of the National Human Rights Commission.

The government has outlawed several practices harmful to women and girls in recent years. However, weak enforcement along with remaining gaps in laws on sexual violence and gender discrimination continue to leave women, particularly ethnic minorities, at high risk of abuse.

“The government has committed to “No one goes hungry and no one dies of hunger” policy. In order to ensure employment, programs such as ‘Skills for All, Employment for All’, ‘Respect for Labor, National Campaign’, Prime Minister’s Employment Program, Presidential Women’s Upliftment Program, Interest Subsidy on Loans for Entrepreneurship Development, Women’s Entrepreneurship Development Program are brought for implementation of Right to Dignity,” he said.

He added that Social Security Allowance had been provided to senior citizens, economically deprived, disabled and helpless people, helpless single women, people with disabilities, children, people who are unable to take care of themselves and people of endangered castes.

“Education and health have always been our top priorities. The problem of street children, which tarnishes human dignity, has been effectively addressed. Kathmandu has been established as a city without homeless people,” said the PM.

“Programs such as ‘People’s Housing’ have been conducted to provide housing for persons or families who do not own a house or land and cannot manage housing on their own or their family’s income, resources or efforts.”

In order to realize the concept of ‘Healthy Citizens for Prosperous Country’, programs such as ‘One Local Level, One Health Institution’, ‘Free Health Insurance for Senior Citizens’ have been implemented to ensure free basic health care and access to emergency health care.

He also lauded his government for working diligently in the prevention, control and treatment of COVID-19 by making maximum use of their resources, means and capacity.

“We started the work of prevention, control and treatment from the state of complete inexperience. From not being able to conduct a single test, we are now able to test thousands in one day,” he said.

“Through these efforts, we have succeeded in preventing the COVID-19 pandemic from spiraling out of control in Nepal. There has also been extraordinary support from the general public since the lockdown.”

“The government is doing necessary homework to ensure prompt availability of the COVID-19 vaccines and make it accessible to all citizens,” he said.

Venting his ire on sharp criticism that he has been receiving from all sides for his inept handling of contemporary socio-political issues, he said, “The government always welcomes constructive criticism from opposition parties, the media and civil society as an indispensable part of democracy. However, attacking the democratic system, institutions and social harmony in the name of criticism, spreading despair and frustration, and creating eternal instability in the society cannot be tolerated. The most basic condition of human rights is to respect the rights of others while exercising one’s rights.”

Prime Minister’s assurance of human rights condition in Nepal comes at a time when attacks have increased against journalists and against the freedom of expression of ordinary citizens online. Critical voices have been subjected to intimidation by ruling party supporters.

Police have used the Electronic Transactions Act to arrest journalists and bloggers, including those reporting on corruption, and even a comedian who upset a movie director with a negative review.

The government presented the Media Council Bill which establishes a new, government-controlled media council, with the power to impose sanctions, including fines and loss of accreditation, on journalists, editors, and publishers if, for example, they are deemed to have harmed the “image or prestige” of an individual.

The new Information Technology Bill is even more draconian than the Electronic Transactions Act it replaces, creating new offences so broadly defined they could plausibly be interpreted to included much online expression, and imposing custodial penalties for those who are convicted.

The government has also proposed a new law that undermined the independence of the National Human Rights Commission by giving the attorney general powers to decide which cases it brings before the courts, and by removing its right to maintain regional offices.

Caste and ethnic minorities remain more vulnerable than others to abuses, including excessive use of force by police, and torture in police custody. Crimes, such as sexual violence, against members of minority communities often go unreported and uninvestigated.