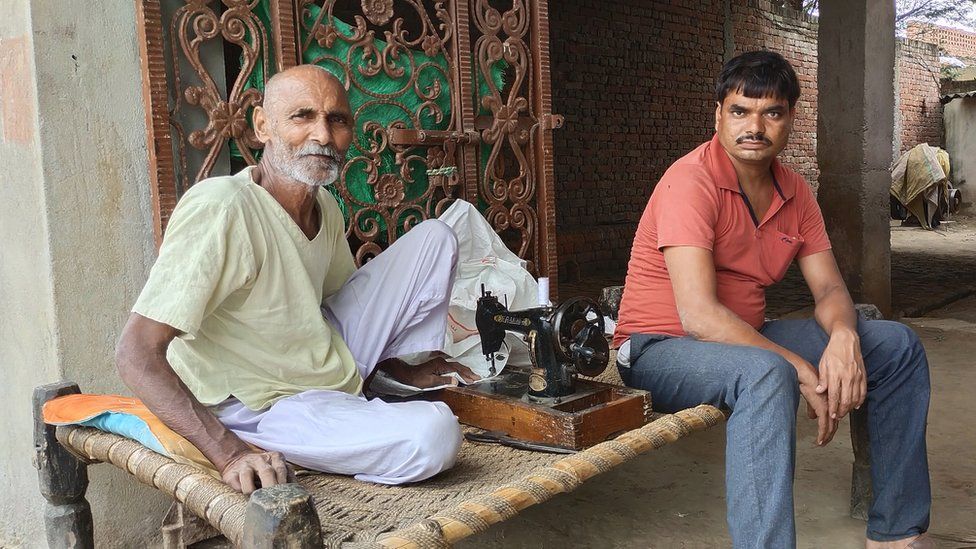 Balbir Singh, a member of the upper-caste Thakur community, says "whatever happened has happened". Image by Abhishek Mathur
Hathras rape case: Prisoners in their own home, lives on hold, a village divided
Read Time: 5 minutes

Exactly a year ago, a 19-year-old woman died in the northern Indian state of Uttar Pradesh after reporting she’d been gang raped and brutally assaulted by upper-caste neighbours.

Her story evoked global condemnation after the authorities forcibly cremated her body in the darkness of the night without her family’s consent.

A cornered government promised a proper investigation and a fast track court to ensure early justice. But a year later, despite four men being put on trial charged with rape and murder, the case is still making its way through India’s sluggish justice system, and the teenager’s family have told the BBC they live like prisoners in their own home, their lives on hold.

I first visited Bhulgarhi village in Hathras district just days after the young woman’s death. The news had made global headlines, and reporters and camera crews crowded her home. Opposition politicians of all hues visited, pledging their support to the family in their fight for justice.

Her mother told me she had found her on 14 September in a field of tall millet crops, battered and bruised, barely conscious and naked from the waist downwards.

Her spine was broken, she was bleeding and vomiting blood. After fighting for her life for a fortnight, she died in a hospital on 29 September.

When I visited her home recently, I found the family isolated in the village, locked up in their home, guarded by machine gun-wielding paramilitary security force members, and under the intrusive gaze of CCTV cameras, mounted at key points to record all comings and goings. (They were provided protection on orders from the Supreme Court amid concerns that they could be targeted by the upper castes.)

“It’s been a wasted year,” says her eldest brother. “We are safe at home because of the paramilitaries. But we can’t go out to work. We are surviving on the compensation money and government rations.”

The family received 2.5m rupeesfrom the state government, under laws which allow for financial compensation to be given families of victims of crimes including murder and rape.

Her younger brother added: “We also feel under arrest. Even to buy groceries or visit a doctor, we have to go with the paramilitaries.”

Before tragedy struck, the family tended to their small farm plot and supplemented their income by picking up other daily jobs. But that’s no longer possible. Six of the seven buffaloes they owned have been sold since they can no longer go out to collect fodder. And the authorities are yet to deliver on their promises of a new home and a government job for a family member.

The young woman and her family are Dalits – men and women formerly known as “untouchables” who languish at the bottom of India’s harsh caste hierarchy.

She had named four men from the upper-caste Thakur community as her attackers. Investigators have charged them with murder, gang rape and committing atrocities against a Dalit, and a trial has begun.

But relatives of the accused alleged that she was in a consensual relationship with one of the Thakurs and accused her family of “honour killing” since they didn’t approve of her relationship.

Kushwaha says her car has been chased by men in a vehicle as she’s travelled to court. And in court, male lawyers have told her that “a Delhi lawyer can’t argue a case in Hathras. They’ve tried to stare me down and told me to stay within my seema [limits]”.

One day in March, she said, the court had to be adjourned twice when things got out of control. On most days, her car has to be escorted to the district border by the police. But the high court recently rejected her request to transfer the case out of the district.

“The family wants to be relocated and I think they should be,” Kushwaha said. “The paramilitaries can provide them physical security. But what about mental and emotional security? The government must provide them accommodation far away from Hathras so they can start life afresh.”

In the village, there is fear and resentment on both sides of the caste divide and the atmosphere is tense and hostile. The families of the accused are angry and accuse reporters of a witch hunt.

Most Thakur families in the village were unwilling to speak, saying the matter is in court and that they don’t know anything.