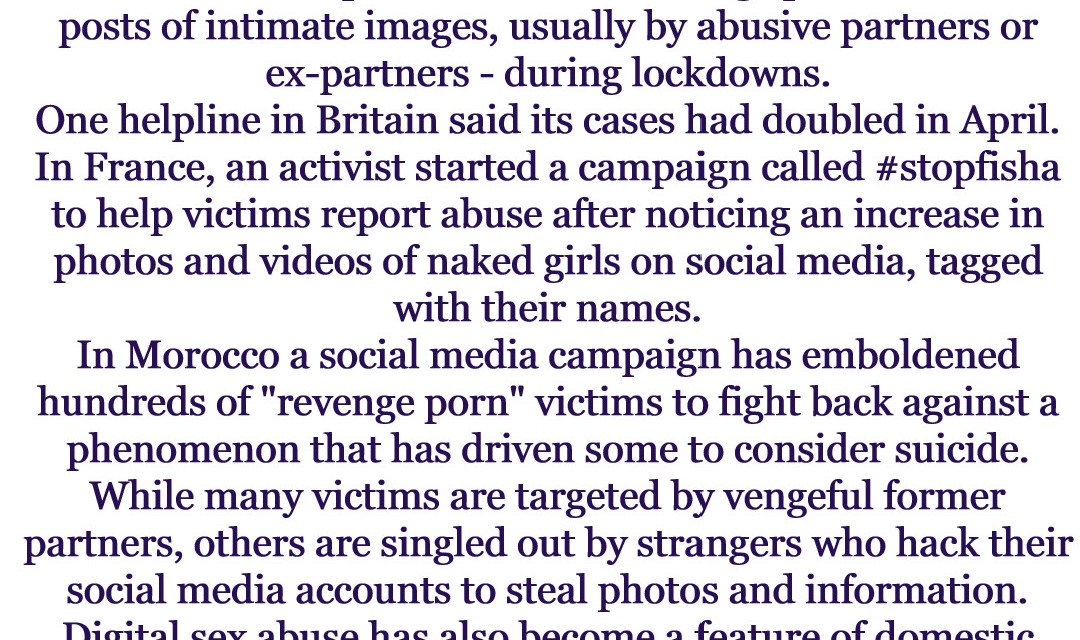 U.N. experts predict the gender poverty gap will widen in 2021 amid the economic downturn.

Even before COVID-19, women were doing three times as much unpaid care and domestic work as men, according to U.N. data, but this has soared in 2020 with women undertaking the lion’s share of caring for sick family members and children off school.

One survey of parents in five wealthy countries showed mothers’ unpaid work at home had nearly doubled to 65 hours a week – almost a third more than for fathers.

A woman’s equality group in Britain said there were “hints of a return to the 1950s” in terms of the division of labour.

In Turkey, research found women did four times as much household and care work as men during lockdowns.

Some women have also cut back paid work to take on extra caring duties. One report found mothers in England were 47% more likely than fathers to have lost or left jobs.

In developing countries most women work in the informal economy with few protections against layoffs.
In Kenya, 20% of women have lost jobs or income compared to 12% of men, according to the government.

The pandemic has had a particularly devastating impact on migrant workers. In Lebanon, some foreign maids have been thrown on the street by employers unable to pay them.

Long swept under the carpet, domestic violence made headlines in 2020 as lockdowns left women trapped at home with abusive partners.

The United Nations warned the crisis could lead to a 20% rise in domestic abuse, describing it as a “shadow pandemic”.

Horrified by the surge in violence, U.N. Secretary-General Antonio Guterres called for a “ceasefire at home”.

Helplines in some places saw a five-fold rise in calls but lockdowns made it harder for services to reach victims.

Some countries converted hotels and holiday-lets into refuge spaces and set up initiatives to encourage victims to seek help during trips to the supermarket or pharmacy.

There were reports of increased femicides during lockdowns.

COVID-19 forced school closures in most countries, impacting hundreds of millions of girls.

In Africa, child rights groups fear many girls could drop out of school permanently, jeopardising decades of work to reverse deep-rooted gender inequalities.

School closures have put girls at increased risk of sexual violence and child marriage, while lockdown poverty has forced some into “transactional sex” to buy basics.

Several countries are already reporting spikes in teen pregnancies and early marriages, raising concerns that many girls may never return to class.

The United Nations has predicted the pandemic could lead to an extra 13 million child marriages over the next decade, potentially undoing decades of work to end the practice, as deepening poverty pushes families to marry off daughters early.

School closures have exacerbated the risks. Authorities in Ethiopia have rescued hundreds of girls since schools shut.

In Malawi, one charity reported a 350% rise in calls linked to child and forced marriages in the spring.

The United Nations has predicted 2 million more girls than previously predicted could undergo FGM in the next decade as COVID-19 disrupts efforts to end the practice.

Increased rates of cutting have been reported across East and West Africa with lockdowns seen as an opportunity to carry out FGM undetected.

Hardship has fueled the rise in some cases because parents think they can get better “bride prices” if daughters are cut, campaigners say.

In Somalia, circumcisers have gone door-to-door offering to cut girls stuck at home.

Campaigners in Kenya, which has vowed to end FGM by 2022, have reported mass cuttings in the Kuria community, with girls paraded through town centres and showered with gifts.

In Egypt, global media reported that a man was arrested for allegedly getting a doctor to cut his three daughters after conning them into thinking they were having COVID vaccinations.

In the United States, abortion rights groups fear the appointment of religious conservative Amy Coney Barrett to the Supreme Court could jeopardise a landmark 1973 ruling which legalised abortion nationwide.

In Malawi, powerful religious groups are strongly resisting a bill to ease restrictions on abortion.\

Globally, coronavirus has increased barriers to abortion for many women due to travel restrictions, clinic closures and overloaded health services.

The number of women dying in pregnancy and childbirth has fallen by more than a third since 2000, but health experts say the pandemic could erode gains as women lose access to contraception and reproductive health care.

Coronavirus shut clinics and outreach programmes in many places this year as staff were redeployed to fight the virus.

Increasing poverty and school closures have left many girls and women more vulnerable to trafficking including online sexual exploitation, according to U.N. experts.

They say the economic downturn and job losses will likely increase trafficking from countries with the fastest and most prolonged falls in employment – a pattern seen during the global 2007-2008 financial crisis.

Charities say the trafficking of Cambodian “brides” to China has already risen sharply.

Globally, there has also been a surge in cybersex trafficking in which women and children are forced into sexual acts live-streamed for paying clients worldwide.

The Philippines – considered the epicentre of cybersex trafficking – reported that cases of online child sex abuse had tripled under coronavirus.

One helpline in Britain said its cases had doubled in April.

In France, an activist started a campaign called #stopfisha to help victims report abuse after noticing an increase in photos and videos of naked girls on social media, tagged with their names.

While many victims are targeted by vengeful former partners, others are singled out by strangers who hack their social media accounts to steal photos and information.

Digital sex abuse has also become a feature of domestic abuse with partners using threats to share explicit images as a way to exercise control.