With incessant rainfall across the country over the past couple of days, floods and landslides have wreaked havoc in different parts of the nation.

Most parts recorded at least 100 milliliters of rain in the last 24 hours and the index is likely to touch 200 milliliters in the days to come.

According to the Director General of Department of Water and Meteorology, Saraju Kumar Baidhya, Nepal will face heavy rainfall for next four days. He said that there is a possibility of heavy rain in the eastern hilly regions as the low pressure line has shifted from west to east.

Hundreds of families have been displaced, dozens of people killed while various roads and bridges have suffered severe damages due to monsoon-related natural disasters. 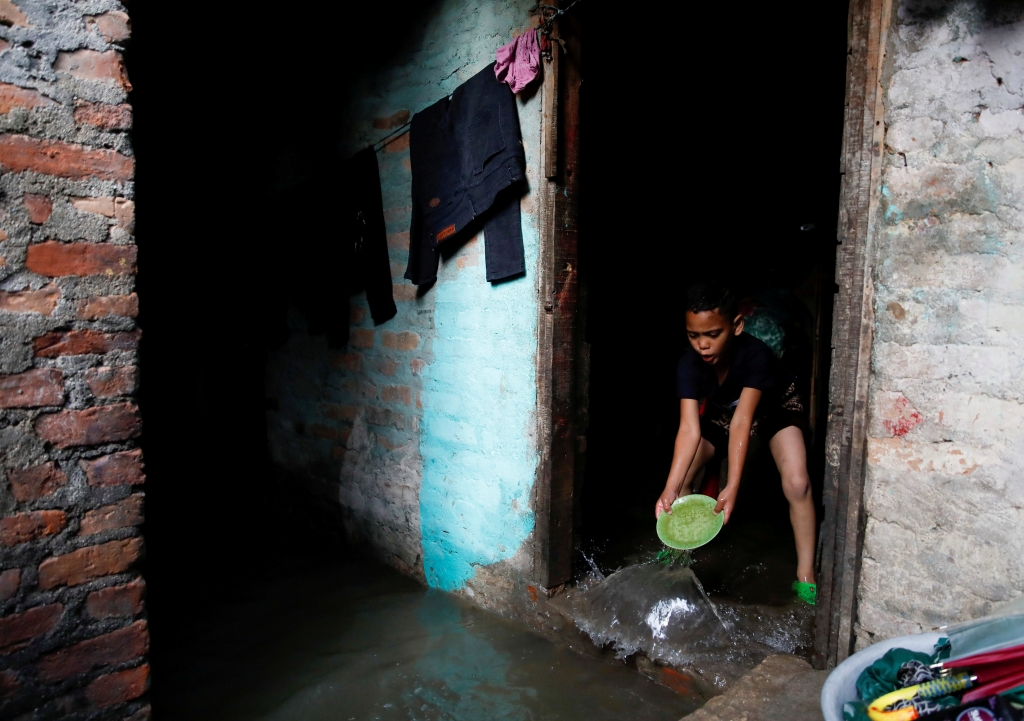 A boy uses a plate to clear water entering his house as the river overflows due to incessant rainfall at a slum along the bank of Bagmati River in Kathmandu, Nepal July 20, 2020. REUTERS/Navesh Chitrakar

Almost all houses have been inundated in Rajbiraj Municipality, Saptari.

Three persons of a family were killed as they were buried by a landslide in Tirpurasundari Rural Municipality-6 of Dhading district on Monday night.

Persistent rainfall triggered the landslip last night which buried the family’s house at Kafalgairi in Aaginchok, causing the deaths of Milan Khand (22), Samjhana Khand (19) and their 18-month-old son, according to Tripurasundari Rural Municipality.

Their bodies were recovered the bodies from under the debris.

Meanwhile, five other houses are at risk of being swept away by landslides in the area, informed DSP Rupak Khadka, spokesperson at the District Police Office, Dhading.

With the latest incident, the number of landslide and flood casualties in Dhading has reached four, until this morning.

A 17-year-old girl died in a landslide in Gajuri Rural Municipality on Tuesday itself.

Similarly, a person was swept away by a river in Thakre of the district, and is still missing.

Earlier, due to landslides across several points along the Prithvi Highway, road sections have been swept away disrupting vehicular movement, thereby cutting off the link between the capital and the highway.

The Mauwakhola bridge that lies at the border of Chitwan and Dhading has collapsed.

65-year-old Bal Bahadur Garbuja has gone missing due to the flood in Bhajenikhola of Annapurna-3, Kavre. More than 30 houses including the Border Police Post and Red Cross building are at risk after the Kaligandaki river in Annapurna-2, Kavre started flowing towards the settlement.

The Hanumante River and other smaller rivers swollen by torrential rainfall for the past two days have inundated many residential areas in Bhaktapur Municipality and Surya Binayak Municipality.

Flood in the Hanumante river submerged settlements in wards 1, 3 and 4 in Bhaktapur district. Hospitals, schools and dozens of houses from Hanumanghat to Sallaghari area were affected due to the flooding. Likewise, most of the places in Balkot and Dadhikot have been inundated in Surya Binayak. 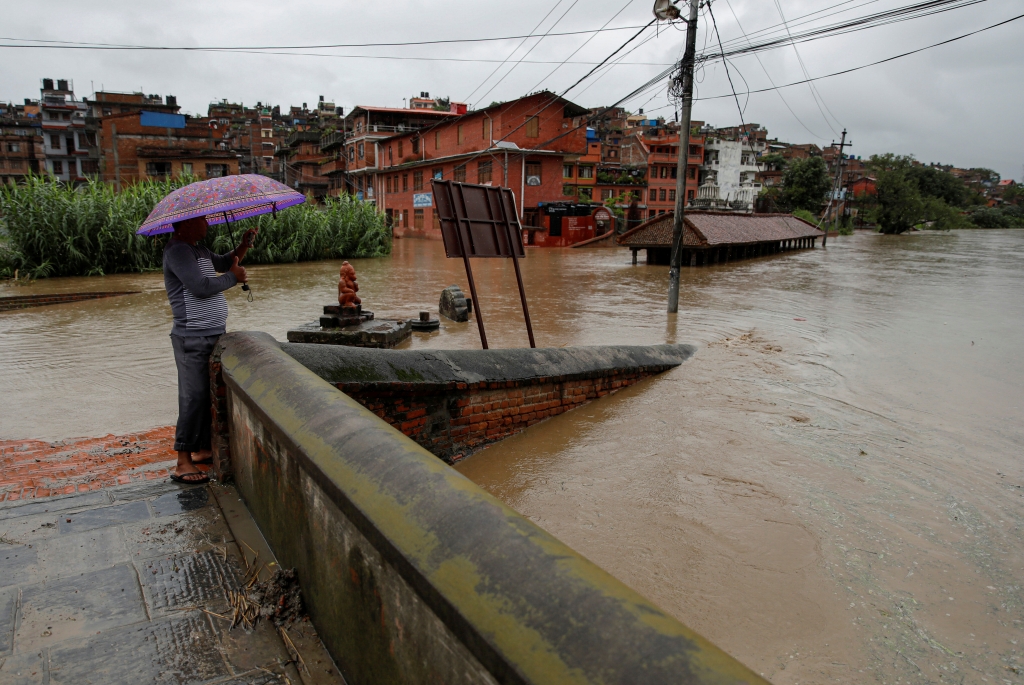 A man stands on a bridge as a river overflows due to incessant rainfall in Bhaktapur, Nepal July 20, 2020. REUERS/Navesh Chitrakar

Two persons including a child lost their lives when the flooded Parigaun river swept away houses in Naugad Rural Municipality-6 of Darchula district after continuous rainfall last night.

According to chief of Naugad Police Post, Bhuwan Bahadur Chand, Maanmati Devi Thagunna (42), and Paravati Thagunna (5) — daughter of Man Singh Thagunna — were killed in the incident. Their bodies were found inside the rubbles of the house.

Meanwhile, the Dungri Hydropower’s production house in Mahakali Municipality-3 has been inundated, obstructing the plant activities.

Flooded Dhauligadh River damaged a road section that has fully obstructed the movement on Mahakali Highway.

Almost every village of southern region of all eight districts in Province 2 have been inundated. Flood in Saptakoshi river has crossed the danger level. As per the measurements taken at 6 am on Tuesday, the water flow is 334,990 cusec per second – the highest measurement of the year.

The people residing on the coastal areas of Sunsari and Saptari districts have been informed to remain on high alert till Wednesday morning or move to safer places.

Four families have been missing in Sunbarshi-7, Morang after the Bakraha River reached human settlement. More than 150 families residing there are at high risk.

Nawaraj Gurung, 22, of Gagalphedi in Kageshwari Manohara-1 of Kathmandu has died due to a landslide last night. A tempo almost completely drowned under the Teku bridge.

Heavy rainfall has also damaged infrastructures in the Kathmandu Valley – settlements along various riversides have been inundated due to rising water level in the rivers of the valley. Some families in Kathmandu, Bhaktapur and Lalitpur have been affected and also some have been moved to safer places. 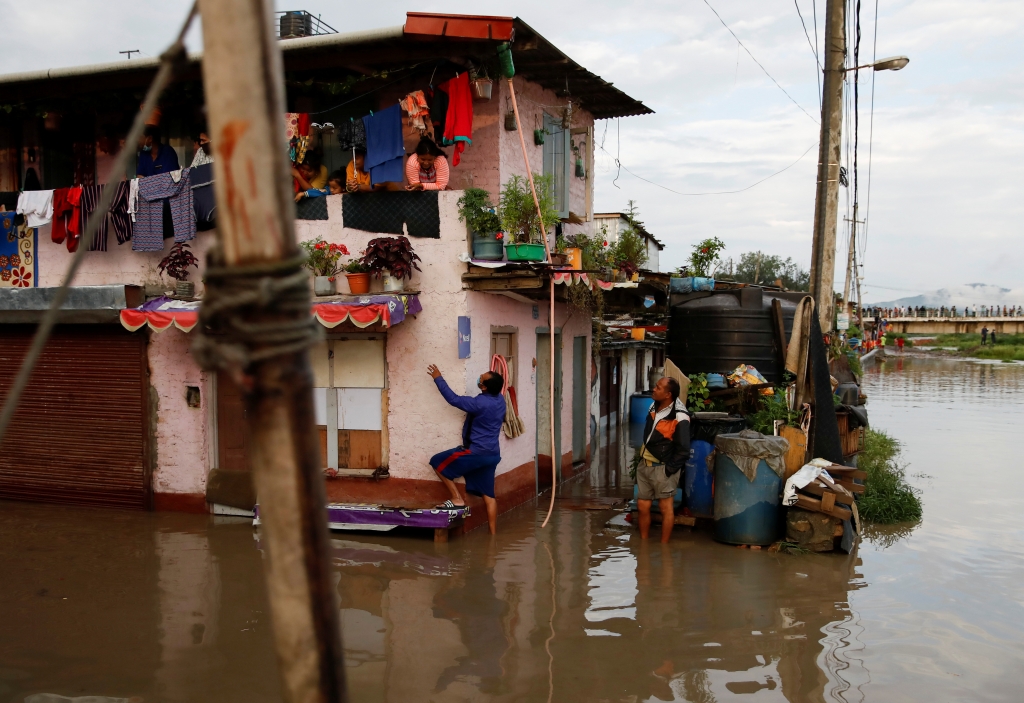 Residents look from a balcony as a river overflows due to incessant rainfall at a slum along the bank of Bagmati River in Kathmandu, Nepal July 20, 2020. REUTERS/Navesh Chitrakar

Similarly, The Prithvi Highway, the main road that connects several western districts to the capital Kathmandu, has been blocked in dozens of places due to landslides.

The Siddhartha Highway and the East-West Highway have been blocked in Province-5 due to landslides in various places.

The Butwal-Tansen road section was completely blocked when a landslide fell near Gaudepul in Tansen Municipality-8 on Monday night.

Floods in several rivers of Gandaki Province including Kaligandaki, Myagdi and Raghuganga on Monday have washed away roads, three motorable bridges, two suspension bridges and a two temples in Myagdi.