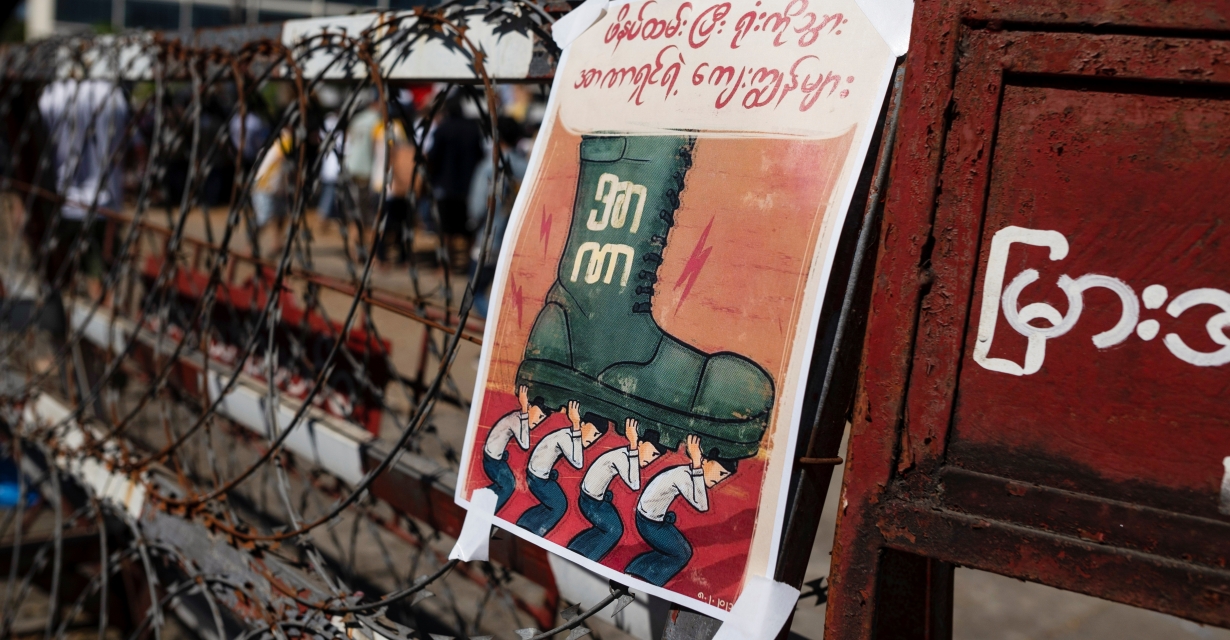 A placard is displayed outside the Central Bank of Myanmar during a protest against the military coup and to demand the release of elected leader Aung San Suu Kyi, in Yangon, Myanmar, February 11, 2021. REUTERS/Stringer
Facebook reducing distribution of Myanmar military content
Read Time: 3 minutes

Facebook said on Friday it would reduce the distribution of all content and profiles run by Myanmar’s military, saying they have “continued to spread misinformation” after the army seized power and detained civilian leaders in a coup on Feb. 1.

The measures – which are not a ban, but are aimed at reducing the number of people who see the content – will apply to an official page run by the army and one by a spokesperson, the company said in a statement, as well as “any additional pages that the military controls that repeatedly violate our misinformation policies”.

The pages will also not appear on newsfeeds as “recommended”.

The social media giant said it had also suspended the ability for Myanmar government agencies to send content-removal requests to Facebook through the normal channels used by authorities across the world.

“Simultaneously, we are protecting content, including political speech, that allows the people of Myanmar to express themselves and to show the world what is transpiring inside their country,” said Rafael Frankel, director of public policy, APAC emerging countries.

Hundreds of thousands of people have been protesting across Myanmar since the army overthrew the civilian government led by Aung San Suu Kyi and detained most top leaders.

Supporters of Suu Kyi’s National League for Democracy (NLD) welcomed the U.S. sanctions but said tougher action was needed to push the military out of power and force it to recognise the NLD’s landslide victory in November elections.

“We are hoping for more actions than this as we are suffering every day and night of the military coup here in Myanmar,” Suu Kyi supporter Moe Thal, 29, told Reuters.

“We want to finish this ASAP. We may need more punishment and action against Myanmar’s acting president and generals.”

The coup and the detention of Suu Kyi along with more than 260 others have prompted the biggest demonstrations since a 2007 ‘Saffron Revolution’ that ultimately became a step towards now halted democratic change.

The junta remitted the sentences of more than 23,000 prisoners on Friday, saying the move was consistent with “establishing a new democratic state with peace, development and discipline” and would “please the public”.

Coup leader Senior General Min Aung Hlaing called on civil servants to return to work on Thursday and urged people to stop mass gatherings to avoid spreading the coronavirus – addressing the protests for the first time.

Among protests across the country on Thursday, hundreds of workers lined a road in the capital Naypyitaw, chanting anti-junta slogans and carrying placards supporting Suu Kyi. Thousands also demonstrated in the main city of Yangon.

Hundreds of protesters also demonstrated outside the Chinese embassy, accusing Beijing of supporting the military junta despite Chinese denials.