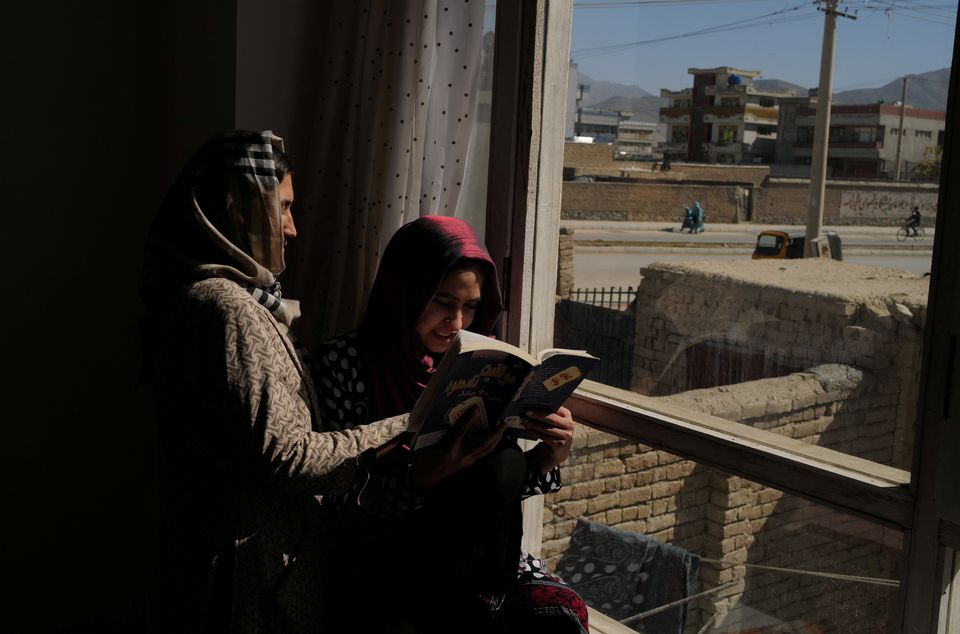 Hawa, 20, a third-year Russian literature student at the Burhanuddin Rabbani University (which was renamed by the Taliban to Kabul Education University), reads a book with her sister on a windowsill at their home in Kabul, Afghanistan, October 23, 2021. REUTERS/Zohra Bensemra
Dreams on hold: Afghan girls, women desperate to get back to class
Read Time: 8 minutes

To fill her days and keep her mind occupied, university student Hawa sits by the window in her Kabul home and pores over a book.

Like hundreds of thousands of other Afghan girls and young women, the 20-year-old Russian literature undergraduate has not been allowed to return to her studies since the Taliban seized power in mid-August.

And like many of her peers, she is feeling a mixture of frustration and anger that her aspirations to study and work are being thwarted.

“We are not born to sit at home,” Hawa told Reuters in her family’s house in the Afghan capital, where she has been cooped up spending her days drawing, reading and doing chores.

“If we can nurture babies we can provide for our families too. In this situation, I do not see my dreams coming true.”

The hardline Islamist Taliban movement, which stormed to power earlier this year after ousting the Western-backed government, has allowed all boys and younger girls back to class, but has not let girls attend secondary school.

Most public universities are not functioning at all, or only partially.

Officials have tried to assure Afghans and foreign donors that people’s rights will be honoured, including allowing girls to go to school and women to study and work once details on how to do so in accordance with Islamic law are thrashed out.

They have also blamed the international community for cutting off aid, making it harder to fund the reopening of schools and universities for all.

More than three months into their rule, that has not happened, and some are skeptical of a group that, when it was last in power from 1996-2001, banned all girls from school and women from paid employment.

Fewer than 40% of Afghan girls attended secondary school in 2018 even though it was allowed then, according to the most recent figures from UNESCO.

Much of the country remains deeply conservative, despite 20 years of Western-backed rule and billions of dollars in foreign aid aimed partly at promoting equality and civil rights.

But in urban centres, in particular, girls and women have enjoyed greater freedoms since 2001, and they are reluctant to let them go.

“Those of us who went to university and also had jobs, were helping our families, of course nothing will come of us, because they (the Taliban) say that whatever we studied in the last 20 years is useless,” Hawa said.

Across town, 17-year-old Sahar is also stuck at home. She wants to become an engineer, but, for now at least, has to learn at home as best she can.

“I am trying to continue my lessons at home but nevertheless the environment at school, the classroom, our friends and teachers is something different compared to being at home.”

She proudly showed Reuters around her old classroom – a school manager on the premises that day allowed Sahar in.

“I would love to come back to my class, resume my studies, to be with my classmates and teachers,” she said, looking wistfully around the room where desks and benches gathered dust.

When her younger brother and sister return from school each day, Sahar helps with their homework.

“They … come home and do their homework, talk about their classmates and their studies. But I feel sad inside that I can’t go to school myself.”

Her sister Hadia, who is 10, has noticed that some of her former teachers and classmates are no longer around – she assumes they were among thousands of Afghans who fled Kabul in the chaotic weeks that followed the Taliban’s conquest.

Even at her age, she recognises the difficulties ahead.

“I’m in the 4th grade. I want to be a doctor, but if in two years’ time I am not allowed to continue my studies like my sister, I won’t be able to fulfil my dream,” said Hadia. “That already scares me.”