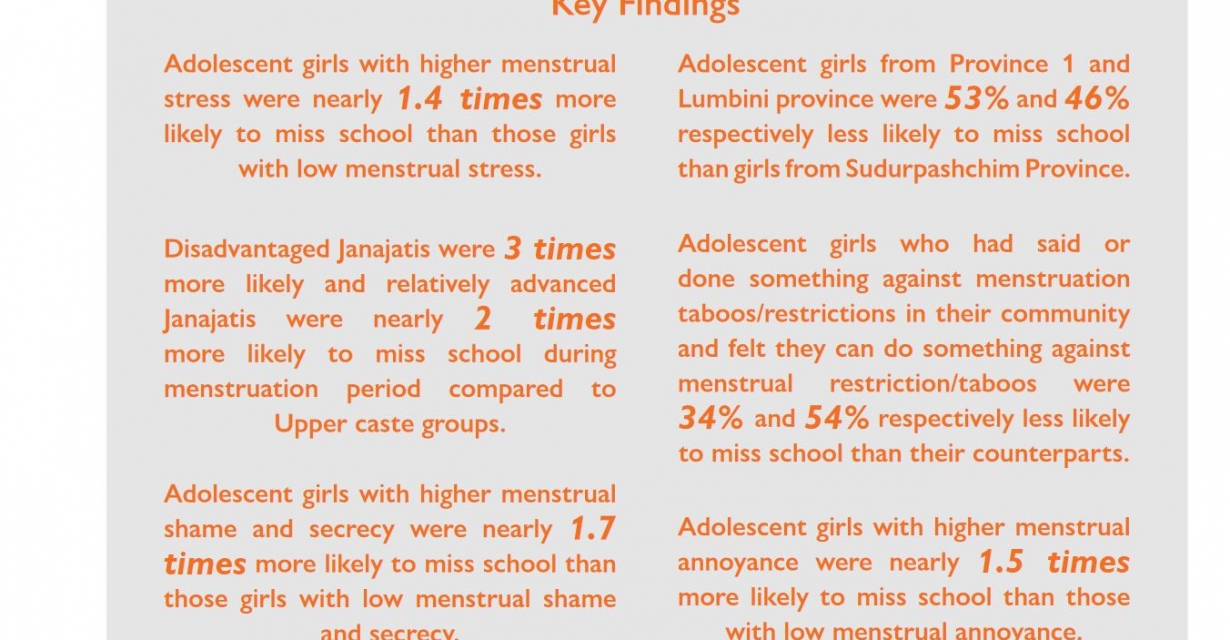 Menstrual taboos are common in many low and middle-income countries (LMICs) including Nepal. Further, menstrual health and hygiene for girls is a neglected area in countries like Nepal.

According to the study on ‘Factors that Trigger Girls’ Absenteeism in School: An Analysis from Menstrual Health and Hygiene Management Study in Nepal’ conducted by World Vision International Nepal in collaboration with Nepal Health Research Council, it is estimated that about 15 to 22 percent of girls miss school due to menstruation, which directly affects their educational status.

The higher proportion of school’s absenteeism among these groups might be because of poverty and socio-cultural barriers within such caste/ethnic groups.

The possible reasons for high school absenteeism in Sudurpashchim are high prevalent of socio-cultural taboos like Chaupadi, and low literacy rate compared to Province 1 and Lumbini Province.

This reflects empowering the adolescent girls can be helpful to reduce the absenteeism in school which is supported by the study conducted by Center for Universal Education at Brookings.

Likewise, adolescent girls with higher menstrual annoyance and higher shame and secrecy were 1.5 times and 1.7 times respectively more likely to miss school during menstruation than their counterparts.

Mental stress is also common, particularly due to constant worry that others may know about their menstruation which hinder their attendance in the school and also affect the quality of their presence in school in terms of attention and concentration in curricular activities even they attend the school.

There are several factors that are associated with girls’ absenteeism from school during menstruation.

Several studies highlight different interventions such as Menstrual Hygiene Management (MHM) friendly WASH facilities in schools, training to girls to prepare and use sanitary pads, mobilization of child clubs on raising awareness on MHM, MHM focal teachers (female) for psychological support to girls should be planned to reduce girls’ absenteeism, as per the study.

Furthermore, provision of adequate information and counseling to adolescent girls on menstruation can be helpful to reduce the menstrual stress, annoyance and shame and secrecy.

Likewise, improving girl’s empowerment to respond to menstrual taboos and restriction on community help to reduce the school absenteeism among adolescent girls during menstruation.

The study highlights that special provisions should focus on Sudurpashchim Province and disadvantaged Janajatis where there is high rate of school absenteeism during menstrual period.

Furthermore, the practice of Chaupadi in Sudurpashchim should be discouraged by execution of law against Chaupadi in close collaboration with local government.

Moreover, menstruation related awareness and advocacy program should not only be limited to the adolescent girls but also should target the household head, religious leaders and other social leaders to reduce the stigma related to menstruation.

Additionally, development and implementation of gender responsive education plans and polices by local government could be further helpful in reducing the girl’s absenteeism in school.