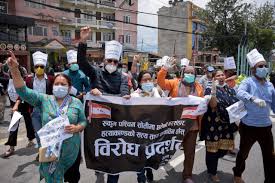 KATHMANDU, June 17 (Thomson Reuters Foundation) – Ever since the death of a young Dalit man killed along with five friends in what activists called a “caste-based massacre”, Nepalis have been taking to streets to demand an end to a form of discrimination that remains rife years after it was outlawed.

The protesters have not turned out in large numbers – a strict coronavirus lockdown has deterred all but the most determined.

But campaigners say their persistence is a sign of the outrage felt among people from Nepal’s lowest caste over a failure to tackle widespread violence and discrimination, echoing the Black Lives Matter protests around the world.

The head of the Kathmandu-based Dalit NGO Federation said the killing of Nabaraj BK, 21, who was chased into a river with his friends as he prepared to elope with a 17-year-old girl from a higher-caste family, was a failure of governance.

“The state has failed to maintain law and order and prevent such illegal and inhuman acts,” Bhakta Bishwakarma told the Thomson Reuters Foundation.

“We are living in terror and urge the government to deliver justice to victims by punishing the perpetrators of the crime.”

Nepal’s government said it was committed to ensuring such “grave criminal” incidents were not repeated and would to providing justice to the victims.

Dalits, formerly known as untouchables – are at the bottom of the ancient caste hierarchy linked to the Hindu faith and form more than 13% of Nepal’s population.

Nepal passed a law against caste based discrimination and untouchability in 2011, yet Dalits face routine segregation and abuse and ancient biases against lower-caste groups make it harder for them to access education, jobs and homes.

They are frequently barred from public places including temples and water wells used by higher-caste Hindus, and restricted to work that is considered dirty or dangerous such as manual scavenging and disposing of animal carcasses.

There have been 33 cases of discrimination or violence against Dalits in 2020 according to Nepal Monitor, a Kathmandu-based human rights organisation. Last year, it recorded 84 such incidents.

BK’s parents have said the girl’s family threw stones at the men and beat them with bamboo sticks in western Nepal on May 23. The bodies of the men, four of whom were Dalit, were later found in a river.

The killings have triggered near-daily protests in Kathmandu and elsewhere in Nepal.

Most have been peaceful, though police said five protesters and seven police sustained minor injuries in clashes on Monday outside the hospital where the postmortems were conducted.

The United Nations and the European Union have spoken out on the latest deaths and one former prime minister, Baburam Bhattarai, has joined the protests, calling on people to adopt a Dalit surname in a country where names are markers of caste.

But Tek Tamrakar, who advises the United Nations on human rights issues in Nepal, said few non-Dalits were engaging with the issue, unlike in the United States, where white people have joined Black Lives Matter protests.

“Even white people are participating in the Black Lives Matter protests because they consider it as a human rights issue. They don’t consider this as an issue concerning black people only,” he said.

“But in Nepal this is not the case. The issue is considered to relate the Dalits only. The society, the state, and even the courts do not consider it as a human rights issue.”

He said that there was a “complete lack of accountability” in Nepal, where the police routinely refused to register crimes against Dalits or dismissed them as accidents.

The outrage over Bika’s case has prompted the parliament to set up a panel to investigate the killings and police have detained 29 people including the family of the victim’s girlfriend.

On the same day he and his friends were attacked, the body of a 12-year-old Dalit girl was found hanging from a tree in southern Nepal after she was forced to marry a higher-caste man who had raped her.

Dalit rights activist Durga Sob urged people from all castes to come out and protest against discrimination in the same way white people have in the United States.

“What they have in America is racism – the white discriminating against the black,” said Sob.

“But in Nepal the discrimination is against people of the same race, colour, culture and religion.”