COVID-19: Have we been fortunate so far?
The views presented in the article are of Mr. Binod Shrestha, and has been published with his consent.
Read Time: 7 minutes

The timeline above summarizes the information from Nepalese media and government press briefings about the 13 positive cases in Nepal. Note that except for Case 1, other cases are still recorded as “active cases”. The text below explains what is shown in the chart.

Except for Case No. 9, all were imported cases, and the timeline shows (wherever possible), when (and how) the person arrived in Nepal. Information on how (if available) they traveled to their home districts has been added.

We need to note that the date the positive cases were announced are not the days they were infected. The person must have been infected days before their arrival (or during their travels).

Until all international flights were closed on 22 Mar, there were many flights coming in every day from China and other countries. Kantipur (7 April) reported the arrival of 20,054 people from 65 countries during the 10 days (14 – 23 Mar) before the closure of the airport. Among them 19,553 were Nepalese.

Tens of thousands arrived via the Nepal’s southern border before itsclosure. I may add here that just between 2 and 6 April positive cases in Uttar Pradesh and Uttarkhand increased from 120 to 339 (183%). So, the week(s) before this, when Nepalese nationals were making their homebound journey, the virus must have already taken hold in the region.

The infected people further took taxis, buses, micros, and also traveled by air (e.g. Buddha Air, Yeti Air). They stayed with relatives in Kathmandu or in hotels. One even threw a dinner party after booking two rooms in a hotel.

During this time, the people with positive results had come in contact with numerous others. In addition, the 175 students (returned from Wuhan) plus 64 passengers who came from affected countries (on 21 Mar) also tested negative.

How genuinely fortunate that no one else besides a sister-in-law has been affected through local transmission!

What is Nepal’s secret behind its low numbers?

Nepal and Bhutan have the lowest number of active cases in the region. Only 12 other countries in the world have fewer total cases than Nepal. Despite reports suggesting the nation’s confirmed infected traveled through many districts, Nepal’s numbers haven’t spiraled. What could be its secret?

Regional data shows that very early (a reference to the number of existing positive cases, not the date) lockdown (more than anything else) may be the reason for the containment of COVID19 in Nepal at the present level.

There are also many ‘theories’ behind being discussed. 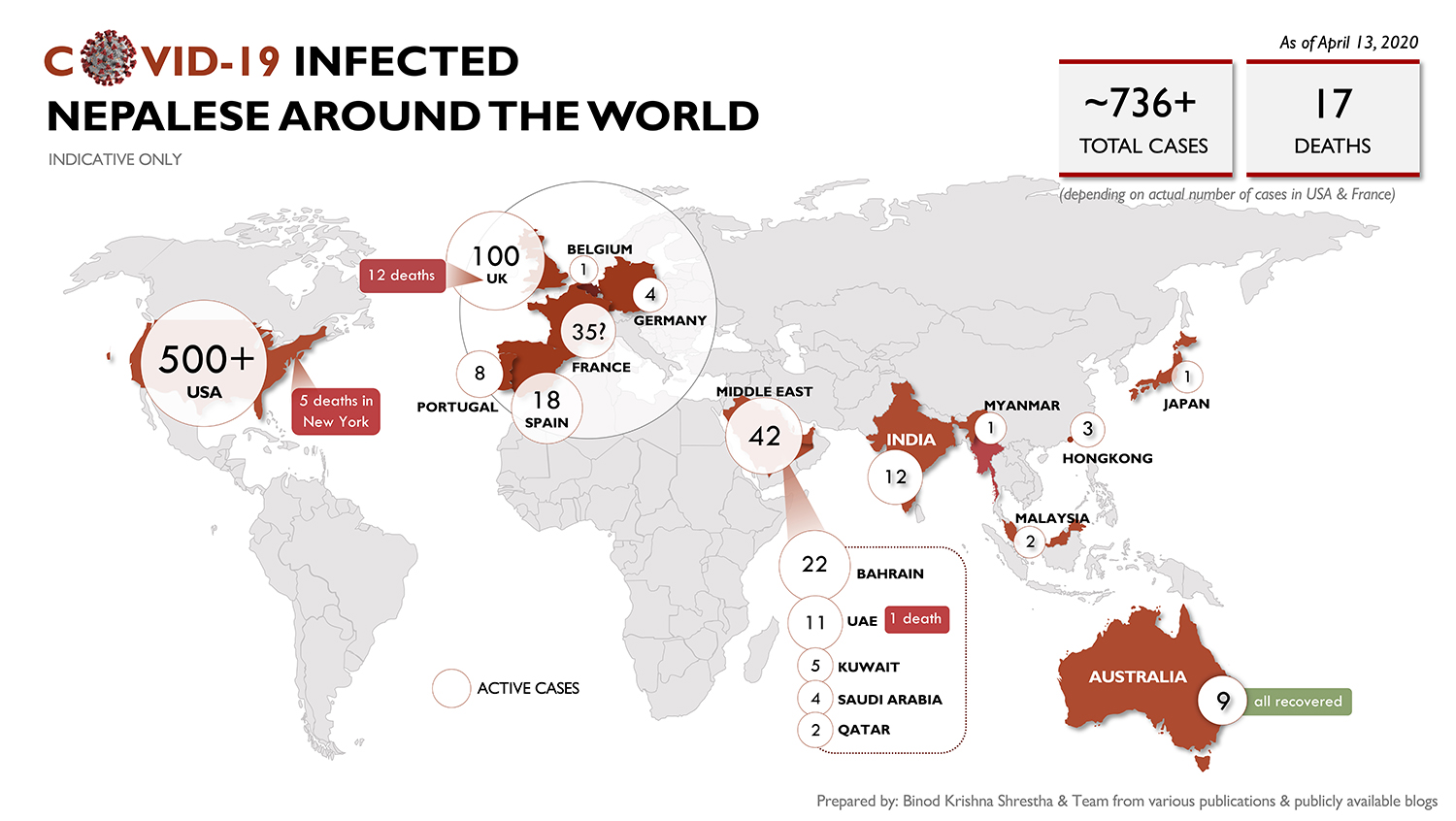 While Nepalese home have been fortunate so far, the scenario isn’t the same abroad. In New York, which has the highest number of affected in the United States, 500 (plus) cases of Nepalese origin people have been confirmed positive. Of the affected, five deaths within the Nepalese community in New York has been confirmed.

Similarly, 12 Nepalese have also died due to the novel coronavirus in the UK. In the Middle East, data shows at least 42 have been infected with one death, and in Australia 9 cases have been registered.

Let us continue to be cautious:

I will be continuing my analysis as the days pass – however, may I also advise everyone to remain cautious. The battle against the pandemic is largely shouldered upon the public too – while tests are ongoing, our responsibility remains to stay indoors and be vigilant. Let us continue to maintain social distance, abide by the lockdown rules, and practice safe hygiene.

The information in this article is sourced from Facebook blogs of Binod Krishna Shrestha who has retired from service. He travels extensively and particularly spends time in Mongolia and Syria.  His interest in this subjects tems from his own traumatic experience after being placed in isolation for 24 hours and hospitalized for two additional days since developingsome symptoms of COVID19 during his travel to a Stage 3 country.  Mr. Shrestha had undergone multiple nasal and swab tests, including X-ray, which yielded negative results from two different hospitals in Bangkok. The doctors concluded his symptoms as being side effects of a new medicine that was recently prescribed to him.