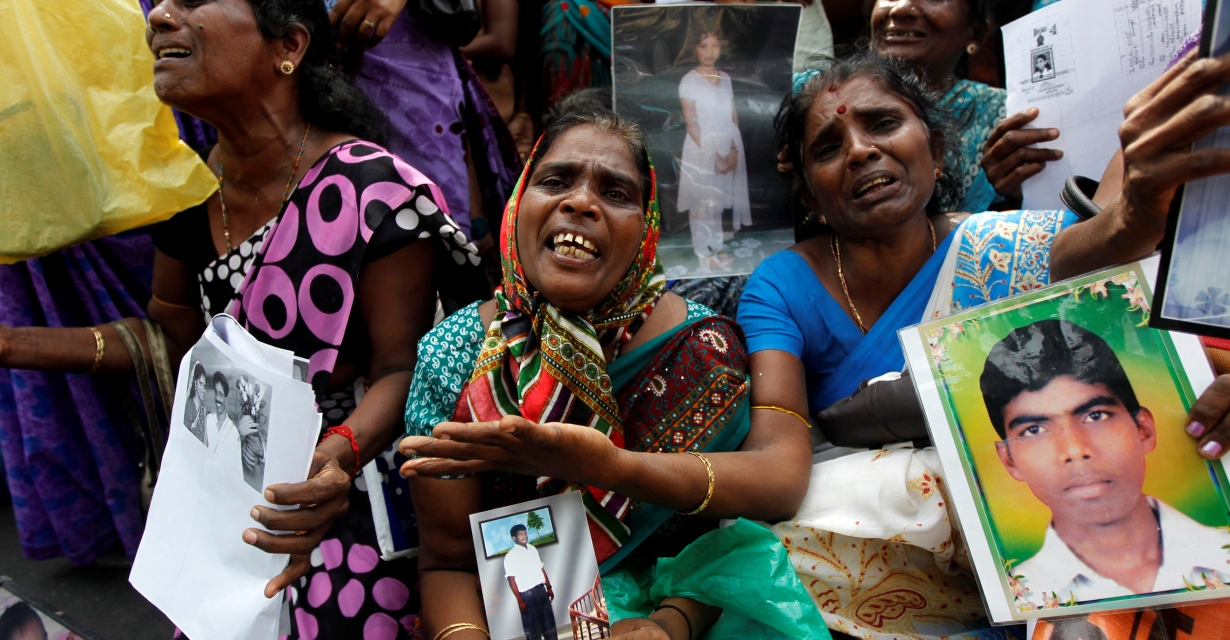 FILE PHOTO: Tamil women cry as they hold up images of their disappeared family members during the war against Liberation Tigers of Tamil Eelam (LTTE) at a protest in Jaffna, about 400 km (250 miles) north of Colombo August 27, 2013 REUTERS/Dinuka Liyanawatte/File Photo
As Sri Lanka faces U.N. scrutiny over civil war crimes, Nepal abstains from voting on resolution
Read Time: 2 minutes

U.N. human rights boss Michelle Bachelet received a mandate on Tuesday to collect evidence of crimes during Sri Lanka’s long civil war, which ended in 2009 with the defeat of the separatist Tamil Tigers and an upsurge of civilian deaths.

The United Nations believes 80,000-100,000 people died in the 26-year conflict, in which the rebels sought to carve out a separate state for the Tamil minority.

It has accused both sides of war crimes.

In the final months, the army pinned the Tigers into a tiny strip of northeastern coast in a ferocious offensive, where the government says the rebels kept thousands of civilians as human shields, exacerbating the death toll.

The Geneva-based rights council adopted a resolution, spearheaded by Britain, giving Bachelet’s office new staff, powers and a $2.8 million budget to look at Sri Lanka’s war, with a view to future prosecutions.

The vote was 22 in favour, with 11 against including China and Pakistan, and 14 abstentions including neighbouring India.

Nepal, meanwhile, chose to abstain from voting on the resolution as Sri Lankan President Rajapaksa had earlier spoken with Prime Minister KP Sharma Oli, asking Nepal’s support in the voting.

Earlier in November, 2018, Nepal had chosen to abstain from voting on UN’s resolution on the human rights violation of Rohingya Muslims in Myanmar.

At a press conference in Sri Lanka’s capital Colombo, Foreign Minister Dinesh Gunewardena said the resolution lacked authority as more nations voted against or abstained than in favour.

“The resolution was brought by countries supported by Western powers that want to dominate the Global South,” he said.

Rajapaksa, who served as the country’s wartime defence chief, has maintained his innocence, and the case was withdrawn after he attained immunity on becoming president in 2019.

The U.N. forum’s resolution also expressed alarm at new signs of deteriorating rights in Sri Lanka. These included putting military officers in charge of civilian government functions, an erosion of judicial independence, and impunity and political obstruction of accountability for crimes.

“This resolution should send a clear message to perpetrators of past and current crimes that they cannot continue to act with impunity,” said Hilary Power, rights group Amnesty International’s representative to the United Nations in Geneva.